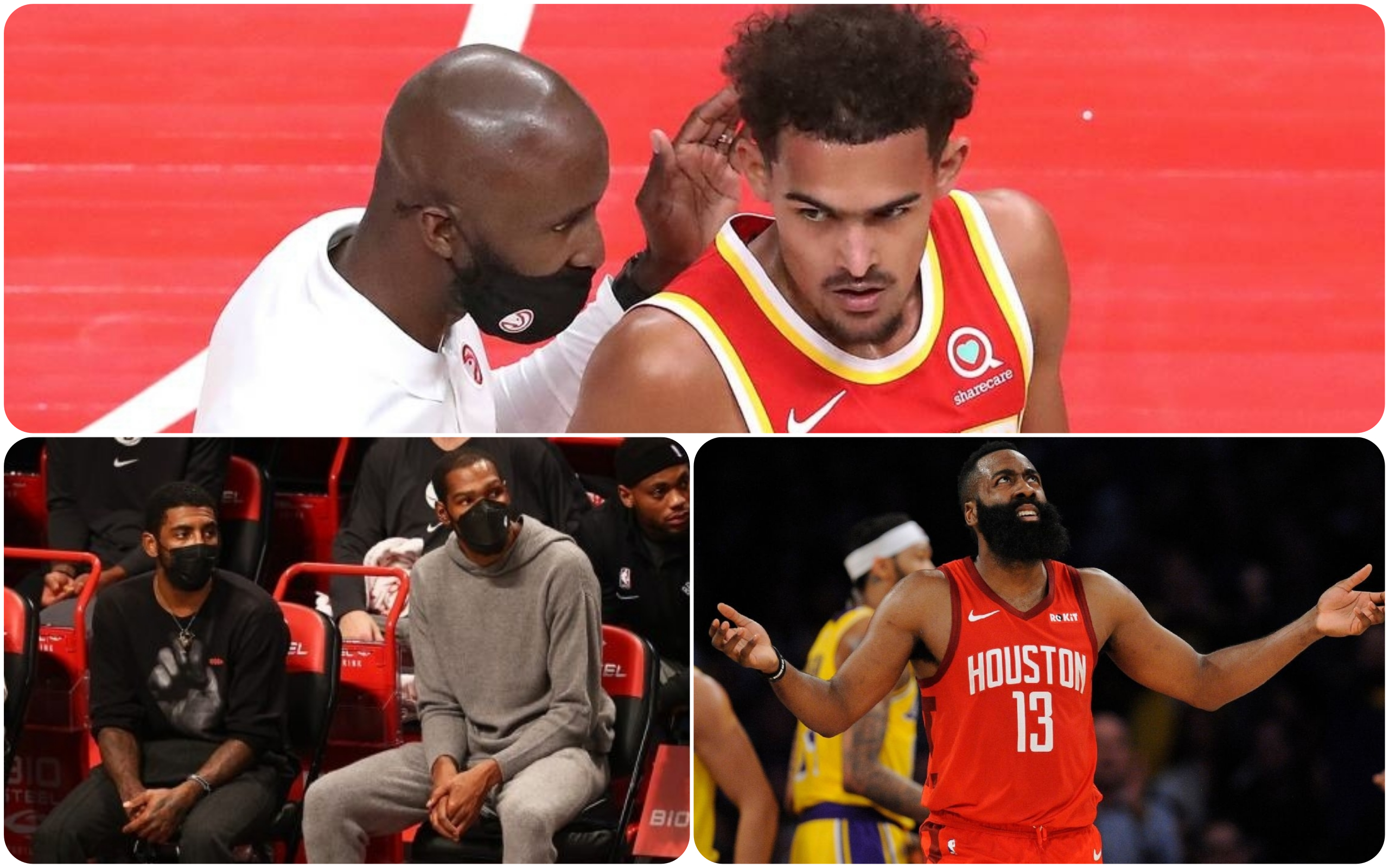 Trae Young and the Atlanta Hawks are soaring as one of the NBA's four undefeated teams, today's stars are resting after 2-3 games, proving Kareem Abdul-Jabbar right, and James Harden's biggest obstacle may be James Harden.

Four teams remain in the ranks of the undefeated. They are all in the Eastern Conference.

And the Atlanta Hawks are one of them, after taking their home opener last night in Atlanta.

No recounts or runoffs necessary.

Half the league’s stars took the night off last night – after just two games.

As my colleague Bill Ingram pointed out, you didn’t grow up watching the star players (do this through) an 82 games schedule … they got hurt, they taped it up, and kept playing.

“Can you imagine Michael Jordan, Hakeem Olajuwon, Magic Johnson, or Larry Bird sitting out a game when they weren’t hurt?”

No, Bill, I can’t. In fact, I remember Magic Johnson playing. Announcing his illness. Coming back to play. And then playing in the Olympics. Other players’ uneducated, uninformed, and fearful biases were more of an obstacle. And he overcame that, as well.

Kareem Abdul-Jabbar may be on to something … NBA fans may be being cheated. But I think guys like Trae Young, Damian Lillard, Ja Morant, Nikola Jokic, and Christian Wood may be exceptions.

The Atlanta Hawks remain one of the NBA’s four undefeated teams after using a 33-25 opening period last night to soar past the Detroit Pistons at State Farm Arena in Atlanta.

The Hawks are as legit as they looked on paper in acquiring Bogdan Bogdanovic, Danilo Gallinari, Rajon Rondo, and Kris Dunn. And the acquisitions have taken the pressure off of John Collins and Trae Young, and likely loads off of head coach Lloyd Pierce who went from scraping for cracker crumbs to feasting on a smorgasbord of options.

Atlanta was led by Young’s 29 point night, who’s second only to Houston’s James Harden as the league’s scoring leader. Bogdanovic shot 60 percent to net 17 points, and Collins was well above 50 percent for his 15 points. Rondo debuted last night with 12 points along with Solomon Hill’s 12. De’Andre Hunter and Cam Reddish also contributed 11 points apiece.

Last night might have been the best start to finish game the Pistons have played all season, but it ended in another loss, their third, to keep them in the basement of the Eastern Conference.

Jerami Grant has proven to be a solid, bankable star in his move to Detroit. He and Josh Jackson put up 27 points each last night to lead the Pistons, something you’d expect names like Derrick Rose and Blake Griffin to do. Neither played last night due to load management (after two games).

Delon Wright finished with 18 points, and Wayne Ellington had 11, while rookies Saddiq Bey and Killian Hayes both notched 10 points apiece as starters. Bey had seven rebounds, as well.

Atlanta shot .476 from downtown. Gallinari missed out on the fun, sitting with a left foot contusion.

On a night when Memphis Grizzlies star, and reigning Rookie of the Year, Ja Morant was off his game, and then out of the game, the Grizzlies went out and beat the Brooklyn Nets.

I’ll give you a minute to absorb that, rub your eyes, scratch your head, and re-read it if necessary … but it did happen in Brooklyn last night.

Before the game even started, the Brooklyn Nets got some bad news about Spencer Dinwiddie – he is lost for the season with a partially torn ACL in his right knee. He injured the knee in an awkward landing during the game against the Charlotte Hornets on Sunday evening.

Then the Grizzlies got some good news when it was announced that – after three games – Kyrie Irving and Kevin Durant would be utilizing load management and not playing in last night’s game.

The Grizzlies took full advantage of the moment as Kyle Anderson and Dillon Brooks stepped up, hitting for 28 and 24 points, respectively, to lead the Grizzlies to the overtime win. Each had seven rebounds as well. Brandon Clarke came alive with 16 points and another seven rebounds, while Jonas Valanciunas finished up with 14 points and 14 boards. Morant shot 28.6 percent for his seven points in 12 minutes of play before spraining his left ankle and leaving the game.

Caris LeVert led the Nets with 28 points in his starring role, but ran out of steam in the overtime, scoring five points on two of 10 shooting. Timothe Luwawu-Cabarrot added 21 points and Joe Harris had 14, while Chris Chiozza matched Harris’ 14 points.

The Nets face the high flying Atlanta Hawks tomorrow night in the midst of their home stand at the Barclays Center.

(Though they should be 2-1 as the Houston game should have been a forfeit, not postponed. But “it’s Christmas.”)

The Jazz outscored Oklahoma City by four in the fourth, just enough to inch past the Thunder and back into the win column. Donovan Mitchell, who’s nicknamed ‘Spida,’ was more like Stretch Armstrong in the final seconds of the game as he hit the go ahead layup with seven seconds remaining in the game despite a rougher-than-usual shooting performance (34.8 percent from the field).

Mitchell would end up with 20 points on the night, while Bojan Bogdanovic led the Jazz with 23 points. Mike Conley matched Mitchell’s 20 points, and Jordan Clarkson added 16, with Rudy Gobert finishing with 12 points and 10 rebounds on the night.

OKC’s Luguentz Dort lit up the stat sheet, shooting 81.8 percent as the game’s leading scorer with 26 points. Shai Gilgeous-Alexander added 23 points and seven assists. Veteran guard George Hill chipped in 14 points and Al Horford finished up with a quiet 11 and five on the evening.

The Thunder are working on three games in four nights, the last two of which Alexsej Pokusevski has failed to score, despite having a decent showing in Oklahoma City’s pre-season. Utah has two games back in Salt Lake City before embarking on a seven-game road bender.

James Harden is trying really hard to show the Houston Rockets, or any team that will listen (i.e. Boston, Philadelphia, Milwaukee, Portland) that’s he’s still worth the stacks of paper thrown to him for playing basketball, no matter where he makes that paper rain after it’s paid to him.

But his team is 0-3 and currently having its mail forwarded to the basement of the Western Conference.

Which begs the question: After eight years away from his Sixth Man role in Oklahoma City, is James Harden really a star to build your team around? Or, should he be traded to one of these cities, and relegate himself back to a Sixth Man role to get that elusive championship ring?

After scoring a game high 34 points last night in Denver and shooting 62.5 percent against the Nuggets in a loss, Harden has to turn to the guy in the mirror, maybe shave that matted mess on his face, and rediscover the young man from Arizona State who once played for the love of the game alongside Kevin Durant, Russell Westbrook, and Serge Ibaka in Oklahoma City.

Yacht parties, a constant stream of alcohol, private shows, and stacks of cash can only make you happy so long. While I, too, would like a taste of that kind of happiness, it’s all fleeting in the big picture. Several greats have gone without a ring – Charles Barkley, John Stockton, Karl Malone, Gary Payton – but none ever drowned their sorrows in alcohol, cash, and punani.

(Okay, maybe Payton for a minute, but a stint in Milwaukee where there may be more barns than strip clubs cured that).

The only thing positive coming out of Houston right now is the maturation of Christian Wood and his game.

The Denver Nuggets are back on track with the win. Lost in all this Harden drama is another triple double performance from Nikola Jokic, who had 19 points, 12 rebounds, and an astounding 18 assists from the big man. Jamal Murray led the team with 21 points, while Paul Millsap matched Jokic’s 19 points on 87.5 percent shooting.

The question of the day is, does James Harden fit anywhere? Or will his epitaph be written as a Houston Rocket, the rocket that sputters off the launch pad but never reaches a true apogee?

No contender has a fit for Harden’s self-centered offense. Ask the Heat.

What a difference a week makes.

The Los Angeles Lakers had a fantastic pre-season, and headed into the 2020-21 NBA season with a wealth of new talent, shiny new rings, and the unspoken, yet screaming expectation, of repeat on the minds of Lakers fans worldwide.

Portland looked shaky at best, and that best describes the Trailblazers since their sweeping fall from grace in the Western Conference Semis back in the spring of 2019 versus the Golden State Warriors.

Last night was a different story as the Blazers came into L.A. on s mission to prove, at least to themselves, that they are a contender and they will not rest until they are in contention once again in the wild, wild West.

The Blazers overcame a 30-22 blitz by the Lakers in the opening period to clap back with a 36-24 advantage in the second to take a four point lead into the halftime break. They then reversed course and put a 31-22 squeeze on the Lakers in the fourth to steal the win and move to fifth place in the West, while L.A. is in ninth and on the outside looking in, for the moment.

Damian Lillard led all scorers with 31 points – 21 in the second half, Gary Trent, Jr. finished with 28 on 71.4 percent shooting, while C.J. McCollum struggled to add 20 points and 11 assists. Portland shot 46 percent, just behind L.A.’s 47 percent. Enes Kanter finished with 12 points and 14 rebounds, Jusuf Nukic had 10 points and 12 rebounds.

With Anthony Davis coming back slowly from his bruised calf and only scoring 13 points and 15 rebounds, you know LeBron James is going to take back the mantle, and did so with 29 points, nine rebounds and six assists. Dennis Schroder is going to get that money that’s been talked about, after another impressive night. Schroder hit for 24 points, while Kentavious Caldwell-Pope (whose family had the coolest PJ’s on Christmas morning on Instagram) added 14 points. No other Laker was in double digits.

Trent had seven three pointers in the win. Carmelo Anthony, who looked forward to playing against his buddy LeBron, did not make the trip to L.A., where the Blazers face the Los Angeles Clippers on this same floor tomorrow night. Anthony stayed home in Portland due to health and safety protocols.

(No, he was not with Harden’s party last week.)