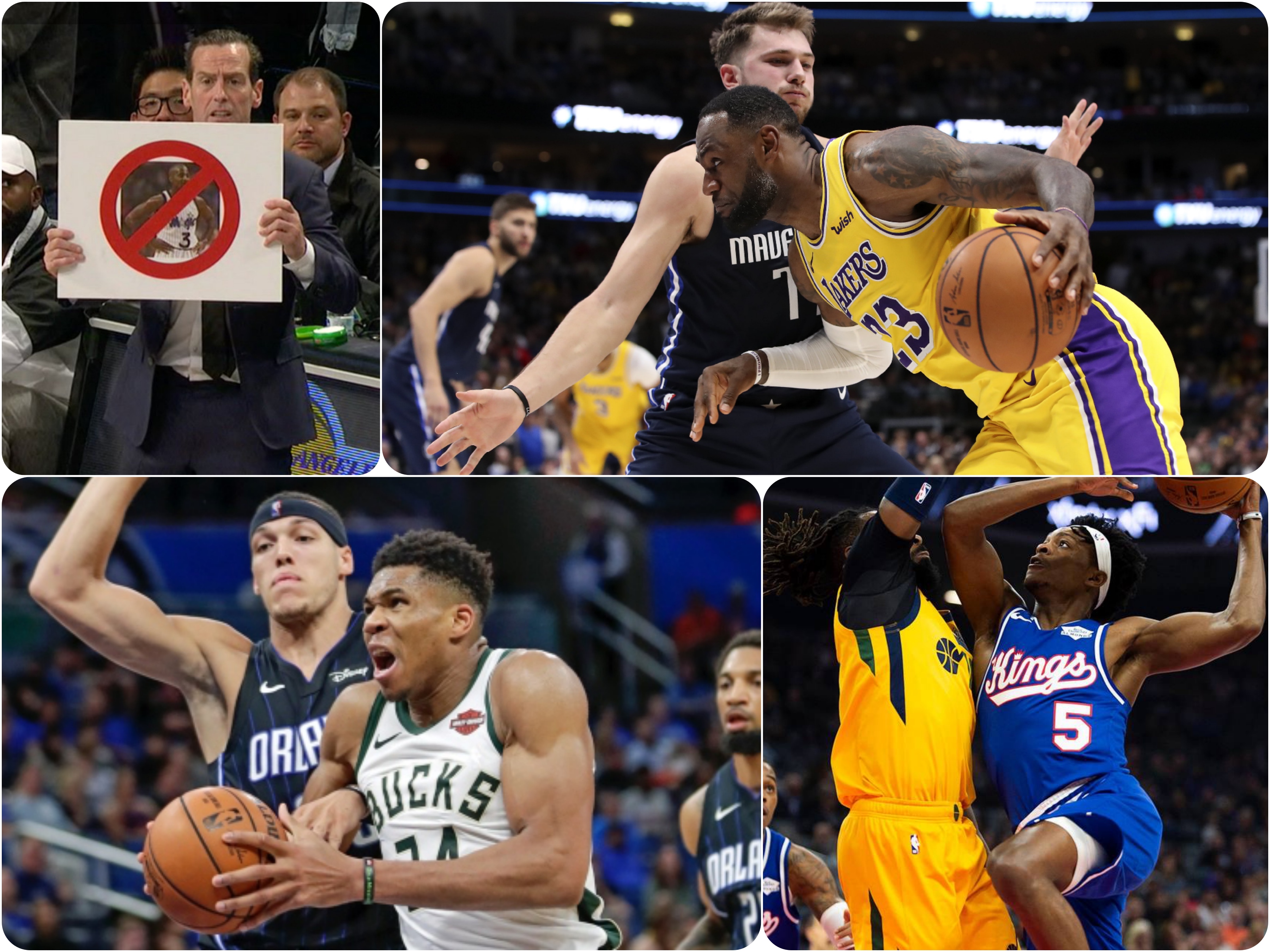 Sacramento gets its first win of the season, MVP chants for Derrick Rose in Chicago, and the Lakers win in overtime in Big D.

Sacramento gets its first win of the season, MVP chants for Derrick Rose in Chicago, and the Lakers win in overtime in Big D.

Malcolm Brogdon has been a steal of a free agency pick-up coming into the 2019-20 season. A Rookie of the Year in 2016-17, Brogdon was tossed around as a future draft pick by Portland and Sacramento before becoming an actual roster player and pick with the Milwaukee Bucks, where he spent three seasons averaging 12.8 points, 3.5 rebounds, and 3.6 assists after being drafted at No. 36.

Since landing via free agency in an orchestrated sign and trade this summer, the man they call ‘Humble Moses’ has been ably filling Victor Oladipo’s shoes until Oladipo returns, averaging 22.6 points, 5.8 rebounds, and 10.2 assists as an Indiana Pacers, making him the odds-on favorite for NBA’s Most Improved so far.

Last night was no exception as Brogdon led the Pacers to their second win of the season, and he is improving those around him, like Jeremy Lamb, who’s languished in stints with Oklahoma City and Charlotte.

The Pacers lost in Cleveland by 11 last week, but have found themselves since. Of course, it helped that Tristan Thompson went 37.5 percent from the floor for only seven points and 10 rebounds.

Lost in Cleveland’s third loss of the season was another Kevin Love double double. Goga Bitadze, Indiana’s No. 18 pick of the draft, scored 10 points and had nine rebounds in the win.

Harden Has to Shoot a Better Shooting Percentage

There’s a reason that the Houston Rockets look so damned impressive on the hardwood, but not on the stat sheet, or the 3-2 win-loss column. Michael Jordan said ‘you miss one hundred percent of the shots you don’t take.’

Through five games this season, Harden has taken 123 shots thus far this season through five games – 31 last night in Brooklyn and 32 in the shootout win over Washington on Wednesday night – so over half in the last two games. Last night’s result was 36 points on 32.3 percent shooting and a loss.

Conversely, Caris LeVert and Taurean Prince combined for just one attempt more, at 32 shots, and ended up with 52 points, 53.1 percent shooting, taking the pressure off Kyrie Irving and netting the win.

He may be averaging 36.6 points per game, but he’s only shooting 36.5 percent from the field, only 20 percent from downtown – but those are 55 percent of the shots that Harden takes.

The majority (42 percent) of those come with the shot clock anywhere between 15 and seven seconds, and 54 percent come after he’s dribbled out seven-plus times while surveying the floor.

Imagine if he worked on his shot to a Stephen Curry level of confidence and ability.

The Houston Rockets might get themselves an NBA Championship.

Antetokuonmpo Back on Track

Giannis Antetokuonmpo seemed to be back to his ol’ Most Valuable self last night in Orlando, leading the Milwaukee Bucks to a 32-point win over the host Orlando Magic.

The Bucks shot 50.5 percent from the field on Orlando’s court, with Middleton at 77.8 percent, Antetokuonmpo hitting 62.5, and Bledsoe at 53.3 percent. George Hill came off the bench hitting 66.7 and Robin Lopez’s 100 percent for six points didn’t hurt the Bucks’ percentage.

Orlando looked very average, not only in play, but on the stat sheet. Three Magic players went for just 11 points – Isaac, Aaron Gordon, and Terrence Ross. So Vucevic and Fournier didn’t get much help at all.

The Bucks were coming off a loss in the battle of the Green on Wednesday night in Boston. After Orlando opened up a 20-7 lead, the Bucks went on a 40-9 rampage and never looked back.

The New York Knicks stayed with the Boston Celtics for three, almost four, quarters of basketball last night. Something you might see as impressive, or at least as progress. Almost.

Of course, they say ‘almost’ is only good for horseshoes, hand grenades, and sex. Almost appropriate, because the Knicks got screwed out of what would have been a momentum building win.

With 1.3 seconds remaining in last night’s game at TD Garden, Jayson Tatum hit a turnaround jumper to end New York’s hope of an upset win on the road, a win that would have given the Knicks two in a row and a very much needed momentum shift going into their game with Sacramento, which should almost certainly be a ‘W.’

Before that, it was promising. Since the Celtics went into Madison Square Garden and tore the Knicks up by 23, it seemed the Knicks had learned from their first three losses, and particularly that loss to the Celtics.

They played Boston much better, beating them in the first quarter by one and playing to a 27-27 tie in the second. The third quarter was 26-24 Boston, giving the Celtics their winning margin but needing to win out the fourth, 29-28, including Tatum’s game winner.

Throughout the echoes of the United Center, fans in the arena were chanting ‘M-V-P’ for Detroit’s Derrick Rose … and that may have been all the motivation the Chicago Bulls needed to step into their second win of the season through six games – just like Rose’s Detroit Pistons.

Erasing a legacy like Michael Jordan’s will never be done. Besides, Jordan was never as injury prone as Rose has been, and Jordan never switched teams like today’s players do, including Rose.

But Rose was to this generation of Chicago fans what Jordan was to Bulls fans in the 1980s and 90s. He was finally an icon they could cling to as their own, and though injury chose a career path for him otherwise, Bulls fans are loyal and they don’t forget how exciting he was in the Windy City during his rookie and MVP campaigns.

However, they need to embrace what they have in front of them in LaVine, Porter, Carter, Coby White and Lauri Markkanen. Forget how inept the front office has been, and embrace the guys who are going out night in and night out to try and be a better team.

Do it quickly, before they become free agents and decide the grass is greener elsewhere.

James Takes His Turn in Dallas

They may still be debating whether or not Lee Harvey Oswald shot JFK in 1963, but in 2019 we already know who was doing all the shooting last night in Dallas. There’s no debate. No conspiracy theories. It was LeBron Raymone James, Sr. The motive? Hey, it was his turn to try and get 40 and 20.

The veteran James took 23 shots to be exact, converting 56.5 percent from the field, 81.8 percent from the line, and 44.4 percent from downtown. In the process, he netted an impressive triple double that was nearly matched by second year Maverick, Luka Doncic, and also won the game in overtime.

Last year’s Rookie of the Year did the palindromic 31 and 13 and added 15 dimes. Kristaps Porzingis only put in half the effort, and the Mavericks saw the return of Dwight Powell in his first game of the season.

Danny Green came back to life, hitting the shot that forced overtime (James with the assist), and Avery Bradley got into the mix with an 11 point night. For the Mavericks, Delon Wright and Tim Hardaway Jr. kicked in 12 and 11, respectively.

The monkey is off the back of Luke Walton and the Sacramento Kings. No longer are they the NBA’s only winless team, thanks to a concerted team effort and a front rim miss by Utah’s Donovan Mitchell at the buzzer last night in the Golden 1 Center in Sacramento.

The Jazz knocked the Kings out with a 32 point win last week in Salt Lake, but was a different Kings team than that night; that being said, they nearly blew a large lead late in the game, allowing the Jazz to run off 13 points to their five.

Rudy Gobert patrolled the paint for Utah and finished with 15 points and 16 rebounds in a losing cause.

Spurs Add to Insult to Injury

San Antonio head coach Gregg Popovich is one of the best people in the NBA, perhaps all of sports. But he’s not going to roll over and give the Golden State Warriors an empathy win because they lost Stephen Curry for the next three (plus?) months.

Instead, he unleashed a load of Patty Cakes, the Wonder from Down Under, 10th year guard Patty Mills on them, for a 31 point Tasmanian blitz.

LaMarcus Aldridge’s load management also seemed to work out, as he rested through the game against L.A. only to come out strong in San Francisco. Bryn Forbes (14 points), DeMar DeRozan (13 points, 11 assists), and Derrick White (10 points) added to Golden State’s woes.

With only one tried and true star remaining, head coach Steve Kerr noted that he was going to try and limit Draymond Green’s minutes. Green finished 6-8-7 in 34 minutes last night in the loss, another at the Chase Center.