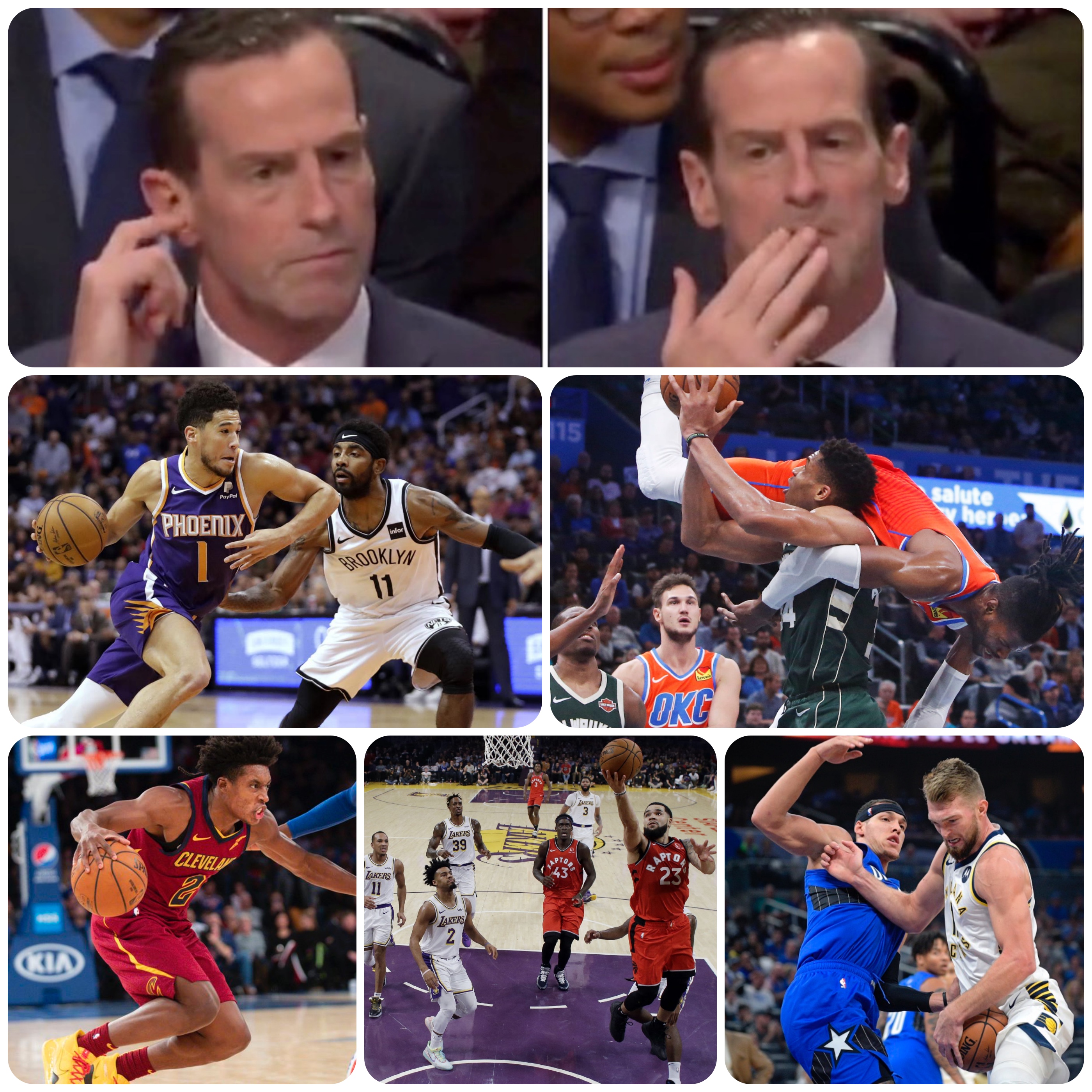 Toronto proves they have championship blood running through their veins, the Blazers' OT may be a catalyst for the rest of the season, and Kenny Atkinson markets a new lip balm.

The Toronto Raptors have proven themselves against the best of the West, Portland may use their overtime period as a catalyst for the rest of the season, and Brooklyn Nets head coach Kenny Atkinson is marketing a new lip balm to combat the desert sun … or the scorching shooting of the Phoenix Suns.

The Jokic is on the Timberwolves

The good news is the Minnesota Timberwolves have the same record as the San Antonio Spurs. The bad news is that both their record is 5-4, outside looking in in the Western Conference. What a difference a week makes.

That’s all it took for Nikola Jokic to hit his second game winner in as many games; hug from head coach Mike Malone optional. He did it for the ‘W,’ not the ‘H.’

Karl-Anthony Towns was the game’s leading scorer with 25 points, including the corner three that sent the affair into the extra period. But the 8-8 tie in overtime was capped by Jokic’s J with 2.4 seconds remaining and the Wolves were sent packing.

Other than Jokic’s shot, both teams shot poorly, with Denver finishing the night with 38 percent from the field to Minnesota’s 35 percent. The Nuggets also outrebounded Minnesota, 57-53.

Will Barton added 13 points and 12 rebounds, and Gary Harris finished with 13 and six. Texas Tech product Jarrett Culver finished with 10 points for the T’Wolves.

The flight home should be nice for the Nuggets as they get a day off before facing Atlanta.

Pacers Pull Away in the Second Half

A strong second half propelled the Indiana Pacers two games above the .500 mark last night in Orlando, as the Magic lost what was a 60-51 halftime lead, as the Pacers pulled away with a 58-42 second half.

The Indiana offense was not only impressive in the comeback – with runs of 12-0 to start the second half, and an 18-8 later to take the win – but their defense limited Orlando to 35.7 percent shooting in the second half.

Terrence Ross shot well off the bench at 83.3 percent and 12 points, while Jonathan Isaac mustered 10 points. Of the starting lineup, though, only Markelle Fultz and Evan Fournier got above 50 percent from the field.

For the Pacers, six got into double digits. In addition to the top three, Doug McDermott added 18 points and six rebounds, T.J. McConnell had 12 points and eight rebounds, and Aaron Holiday went for 11 points.

Imagine how tough the Pacers could really be once they get Victor Oladipo and Myles Turner back in the fold.

Sixers Right the Ship, Back on Winning Track

The Philadelphia 76es and Charlotte Hornets traded punches throughout the first half of last nights game – not the kind that get anyone suspended – but with the Sixers striking first with a nine point advantage in the first quarter, the Hornets delivering a 14 point welt in the second, to take a 58-53 advantage into the locker room. It looked like the Sixers were headed to their fourth loss of the season.

Instead, Philadelphia came out and swatted right back with a 12 point advantage in the third to put the game away and get back in the ‘W’ column for the first time in four games.

Thank God they’re back in the weaker Eastern Conference, right?

Six Sixers showed up in double digits, with support in the win coming from #VFL Tobias Harris at 14, seven and five, Trey Burke with 12, five and four, and the other #VFL – Josh Richardson – hitting for 11, seven and six.

Charlotte’s Devonte’ Graham was stellar again, as was Cody Zeller. Their support came in the form of P.J. Washington matching Malik Monk’s 15 points, and Terry Rozier raking a baker’s dozen.

Philadelphia outshot the Hornets 54 percent to 45 percent and outrebounded by 18, 39-25 on the defensive glass.

May have simply been nothing more than ‘no place like home.’

Bucks Eke One Out in OKC

The Milwaukee Bucks have the sitting Most Valuable Player on their roster, but it was the unlikeliest of heroes hitting the game-winning three pointer last night in Oklahoma City.

After the Thunder moved ahead with Danilo Gallinari’s three with 32.3 seconds left, all Thunder players locked down on defense, only to have Milwaukee center Brook Lopez take aim and hit a three of his own in response and put the Bucks up with 24.5 left in the game.

George Hill (eight – five – five) salted the game away with his only two free throws of the night to give the Bucks the edge and the game.

The Bucks outscored Oklahoma 71-63 in the second half to ensure victory before they headed back to cold country. Sterling Brown added 12 and Khris Middleton finished with 10 points.

Oklahoma City played small as their guard corps rounded out the top three due to Steven Adams being out with a knee contusion. Gallinari finished up with 14 points, as did Nerlens Noel, who also had six assists. Mike Muscala ended up with 12 points and Hamidou Diallo had 10.

The Bucks next face their I-94 rival Chicago Bulls.

Beilein’s Coaching Paying Off, Fizdale’s Not

You’d like to think the New York Knicks had an opportunity to get their third win of the season with the Cleveland Cavaliers in town … but opening the first two quarters of the game only scoring in the teens doesn’t cut it, even with the advantage of having a home game in Madison Square Garden.

The other difference is that the Cavaliers actually have a knowledgeable coach and not just a bobblehead … I mean, figurehead.

No coach should be satisfied with a 36 point first half output against a 3-5 team, a team that only has one more win than you do. How the fans at MSG weren’t throwing rotten tomatoes and cabbage on the hardwood in the first half is beyond me. Maybe they were using the vegetables to make soup, so they’d at least have something to keep them warm. A Knicks win wasn’t going to do it.

I know, sounds archaic, but have you watched the New York Knicks play lately? Unmotivated. Their only motivation lately was beating Kristaps Porzingis’ Dallas Mavericks, which they did.

Why can’t they tap into that? Because they don’t have a coach, any more than the Memphis Grizzlies did when David Fizdale was there.

I want to give the guy every chance possible, because he’s a nice guy. But nice guys finish last and the New York Knicks have the record to prove it.

The Knicks’ bigger names fell as flat as Thompson, with Marcus Morris only netting nine points, as did R.J. Barrett and Kevin Knox.

Anyone have Larry Brown’s phone number?

The Brooklyn Nets apparently thought that featuring DeAndre Jordan was going to push them past the Phoenix Suns, who were without Deandre Ayton, who’s serving a 25 game suspension for diuretics.

That kind of decision making, Kenny Atkinson, is why you don’t use your ear wax as lip balm, no matter how hot the desert sun can be.

Jordan clogged the middle against a team that shoots from the perimeter most nights. Even Jarrett Allen can make the conclusion that that’s not the smartest of ideas. We get it – you’re big, but the Suns play smaller, especially with Ayton out.

You’re talking about a team that shot 45 percent from beyond the arc, to Brooklyn’s 23 – nearly 200 percent better than the Nets.  Also a team that dished out 10 more assists, four more steals, and 10 fewer turnovers.

Maybe you should have gotten more than 15 from Kyrie Irving, better than 40 percent shooting and eight points from Caris LeVert, or better than the goose egg you got from the reigning Three Point Champion, Joe Harris.

That would have been coaching.

When you see the final score, you wonder aloud why an overtime period was even need in Portland last night. After all, the 17-6 extra period in the Blazers’ favor makes it look like the Atlanta Hawks weren’t even in last night’s game. Truth is, they simply ran out of gas.

In the end, not only did Portland snap a four game losing streak, but they gave Moda Center fans their first home win of the season. Atlanta has lost its last three games in a row and six of its last seven.

Kent Bazemore opened the overtime period with two three pointers against his former teammates, and the Blazers would turn up the heat, outscoring the Hawks by a near triple amount – 17 to Atlanta’s six.

Trae Young had a game high 35, despite shooting a paltry 30 percent on 30 shots taken. Rookie DeAndre Hunter shot a smidge better at 35.7 percent to net 14 points for the Hawks.

Damian Lillard has 90 points over two games. The Blazers got help from Anfernee Simons’ 20 point night on 66.7 percent shooting, and 13 and eight from Bazemore.

Both teams are sub-.500 after 10 percent of the season, nowhere near expectation for either team, especially the Blazers.

Which Team is for Real? Toronto Answers …

They are the reigning NBA Champions. But how real is that 6-2 record coming into the Staples Center? They are expected to be the Western Conference representative in the 2020 NBA Finals and are 7-1. But when will that bubble be burst? Last night, apparently.

Did the Los Angeles Lakers not watch any game tape of Fred VanVleet? The former Wichita State guard ‘shocked’ the Lakers with a near triple double while exploiting the Lakers’ defensive weak spots.

The Lakers also had a difficult time containing who they knew would be Toronto’s force offensively, in Pascal Siakam. Nevermind that the champs were playing without Kyle Lowry and Serge Ibaka.

Quite simply, the Raptors shot better from both the field and the free throw line, while going neck and neck from downtown at 33 percent for each team. Also, the Raptors went after L.A.’s jugular in the second half, after being outscored 60-52 in the first half. Toronto responded with 612 in the second half while the Lakers only scored 18 in the third quarter and 26 in the fourth.

The bench filled in admirably for Toronto’s wounded warriors: Norman Powell had 14 and five as a starter, Terence Davis had 13 and five, and Rondae Hollis-Jefferson finished with 10 points on 66.7 percent shooting.

L.A.’s Kyle Kuzma is rounding back into form. He had 15 points in 24 minutes off the Laker bench. The Lakers also got 11 and four from Troy Daniels, and 10 and four from JaVale McGee in the loss.

The Raptors will obviously use momentum from this win when they face their championship teammate Kawhi Leonard and his L.A. Clippers tonight after another night’s stay in their hotel rooms.