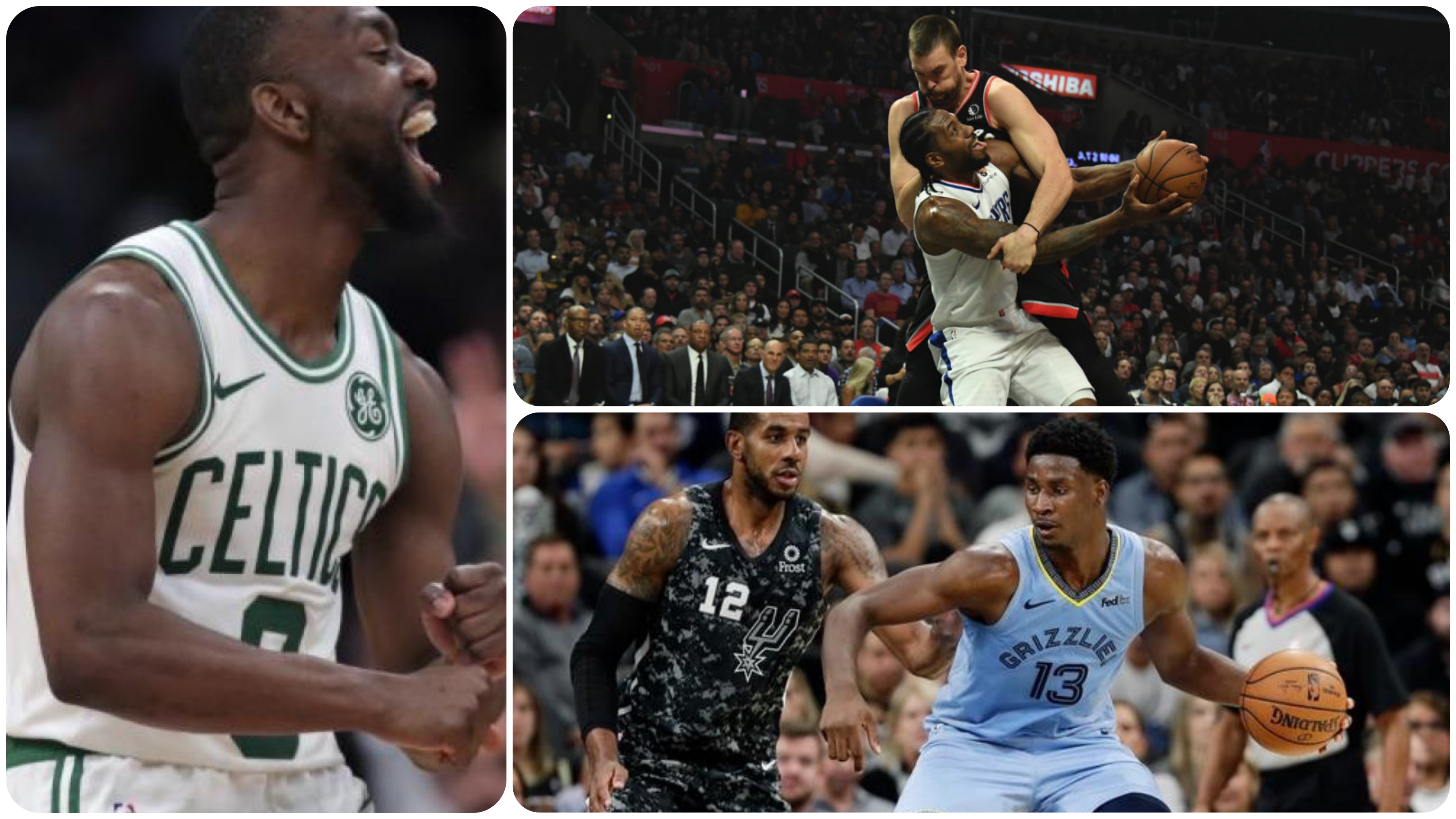 Kemba Walker and the Boston Celtics are the best in the NBA, Jaren Jackson Jr. leads Memphis to a win over the Spurs, and Kawhi Leonard reunites with the Raptors for an evening nap.

The Southwest Division was fully represented last night, where the Houston Rockets took the outright lead and the Spurs slid back to .500 as all five teams had games and only Memphis and Houston won.

Not Even the Return of Blake Griffin …

Last night marked the return of Blake Griffin. Andre Drummond was on social media all day getting people revved up for Game Day against the visiting Minnesota Timberwolves. Too bad under the hood, the Detroit Pistons were all polish with a bad motor again last night in the latest game of their sputtering season.

While the Pistons are trying to do everything but roll the odometer back to the 2002-05, or even better, the ‘Bad Boys’ days, Andrew Wiggins is finding himself and – dare I say it – leading the Wolves along with Karl-Anthony Towns, both at 25.5 points per game 10 games into the season.

This season, Wiggins’ highest scoring output was against Golden State, two games ago, with 40 points. His lowest output was 16 against the Charlotte Hornets in the second game of the season. He’s had performances of 21 against Brooklyn, 25 against Miami and Denver and Milwaukee, 19 against Philadelphia, 21 versus Washington, 30 against Memphis and 33 last night.

The Wolves also outshot the Pistons 50 percent to 44, outrebounded them by six, and had one more blocked shot. Treveon Graham added 13 and six, and Robert Covington went for 10 and four.

Tony Snell added 16 and one for the Pistons, Andre Drummond was at about 50 percent of his norm with 11 and 12, while Markieff Morris rounded out the double digit scoring with 10 and six.

Where We Separate the Men from the Boys

The Boston Celtics are separating themselves from the rest of the NBA like the bones in Gordon Hayward’s hand. One wonders who will step up and replace Hayward as he heals from surgery on his fractured hand, and Marcus Smart wasted no time in answering that question last night.

The NBA’s best record going into the night got a little better behind 29 from Kemba Walker, 25 from Jaylen Brown, 17 from Smart, 11 from Daniel Thies, and 10 from Brad Wanamaker.

Meanwhile, the team absorbed the news that Hayward will be out up to six weeks while recovering from surgery on the hand, injured in setting a pick on San Antonio’s LaMarcus Aldridge. Hayward was hitting 43.3 percent of his shots and averaging 18.9 points a game, 7.1 rebounds and 4.1 assists.

The stepped up night from Smart meant the onus wasn’t on Jayson Tatum, but the next game very well could be and the team is ready to fill in by committee if need be.

It’s what the Dallas Mavericks need to do if they want to remain in the hunt in their division and conference. Last night’s loss slipped them one game back of the Houston Rockets, who handily beat New Orleans.

Grizzlies Turn Spurs Into a .500 Team

Things got a little tougher for the San Antonio Spurs last night. After running out to a 4-0 start and being the second to last team in the league to suffer their first defeat, the Spurs are 1-5 since and ran into another branch of the Spurs’ coaching tree in Taylor Jenkins and his Memphis Grizzlies, a team looking for scraps this time of year.

Jenkins comes from the Spurs’ organization via the G League’s Austin Toros, where he led the Toros to a 27-23 season and into the first two rounds of the playoffs. He began as an intern in basketball ops back in the 2007-08 season, so he knows a little of the inner workings of the Spurs and head coach Gregg Popovich’s coaching philosophies.

Whether that knowledge or memory served him and the Grizzlies last night, or whether Memphis was just hungry for another win will remain as closely guarded a secret as Pop’s post-game quips and quotes.

Jenkins got the most of second year big man Jaren Jackson, Jr. last night, who should at least be a part of the face of this franchise as Ja Morant is set to be. Morant only shot 16.7 percent last night, but Jackson was there with 58.8 percent, Jonas Valanciunas muscled his way to a 75 percent night, and Brandon Clarke – off the bench – shot 85.7 percent to net a quiet 14 and eight night.

San Antonio never got off the mat after a 34-26 third quarter swipe from the paws of the Grizzlies. Both teams traded swings in the first half with Memphis jumping out to a 35-22 first quarter, only to be answered with a San Antonio 32-22 second quarter.

The Southwest Division looks to be as tough a battle this year as in any other, and there’s little room for error – especially if you’re the San Antonio Spurs and you want to maintain respectability.

This isn’t the way you want to go out.

If the New Orleans Pelicans thought they were going to shoot their way past James Harden, Russell Westbrook and the Houston Rockets, they’ve got another thing comin’.

Houston shot 51 percent over the Pelicans last night at the Smoothie King Center; New Orleans only mustered 43 percent of their 95 shots. That’s right, the Houston Rockets won the ball game and shot fewer shots than their opponent at 85.

Does that mean the Rockets are getting better? Learning from their mistakes?

If you mean Harden shooting 52 percent infers improvement? If you mean Westbrook shooting 52.4 percent means they’re getting better? If you mean Clint Capela can continue at an 83.3 percent clip? Then ‘yes’ to all three.

Now, if they could just geet Russ to quit shooting threes (he was 1 of 8 last night) and control the turnovers (Russ and Harden combined for 12 of Houston’s 17), then we might start considering the Houston Rockets as a contender versus pretender this year.

Of course, they played a New Orleans team that was without Brandon Ingram (averaging 25.9 points, 7.3 rebounds, and 3.9 assists) due to a sore right knee; they were also without Lonzo Ball, Nicolo Melli, and of course, Zion Williamson … and the Pelicans only lost by six.

All the guards in the game played their hearts out on both sides – Houston’s were just a little bit better, but they lead the Southwest Division.

Jazz in Rhythm in Win over Golden State

Rudy Gobert took the pressure off the Utah Jazz’s Big Three last night by taking over the painted area and leading the Jazz to their seventh win of the season and handing Golden State its ninth loss.

Utah raced out to a 69-54 first half lead that Golden State could never match, since the Warriors matched their 54 in the second half while Utah scored 53.

Seven Jazz players scored in double digits in support of their top three, including Bojan Bogdanovic and Jeff Green hitting for a dozen each, and 11 apiece for Joe Ingles and Emmanuel Mudiay.

As per usual, it was D’Angelo Russell leading the Warriors, with Jordan Poole and Marquese Chriss coming up with 11 apiece, and a 10 piece from Alec Burks, who had come on of late and was averaging above his career numbers at 14.1 points, 4.1 rebounds, and 2.3 assists.

Please, allow me to apologize for yesterday’s column, in which I called this as my ‘Game of the Night.’ I should have said, if you need a cure for insomnia. I’ve seen YMCA pick up games with more vigor than last night’s reunion of the Toronto Raptors and Kawhi Leonard. I’ve seen lesser respects paid at a funeral.

Other than Lou Williams, it’s like no one took this game seriously.

Sure, the Clippers won to keep pace in the Western Conference with the Los Angeles Lakers, and you kind of want that to happen for Leonard and (if he keeps his word) Paul George, who said he’d be returning this week on the 14th or 15th.

But part of me also wanted the Raptors to win just to prove they have what it takes without Leonard and Danny Green in the fold.

In the end, it was like watching a funeral procession of respect and a caution to make sure you don’t walk on the graves. Like there was a hushed, even unspoken respect that Leonard wouldn’t run it up on his former teammates and they wouldn’t try and go for Leonard’s jugular in his new crib.

Leonard was a far cry from his 30.1 and 9.5 as a Raptor with 12 and 11 last night. And Fred VanVleet was even further removed from his 23 points, seven rebounds and 10 assists he put up against the Lakers the night before.

Hey, as long as the Raptors brought Green’s and Leonard’s rings, I’m good.

These two teams meet again in Toronto on December 11th (why not Christmas Day, @NBA?).