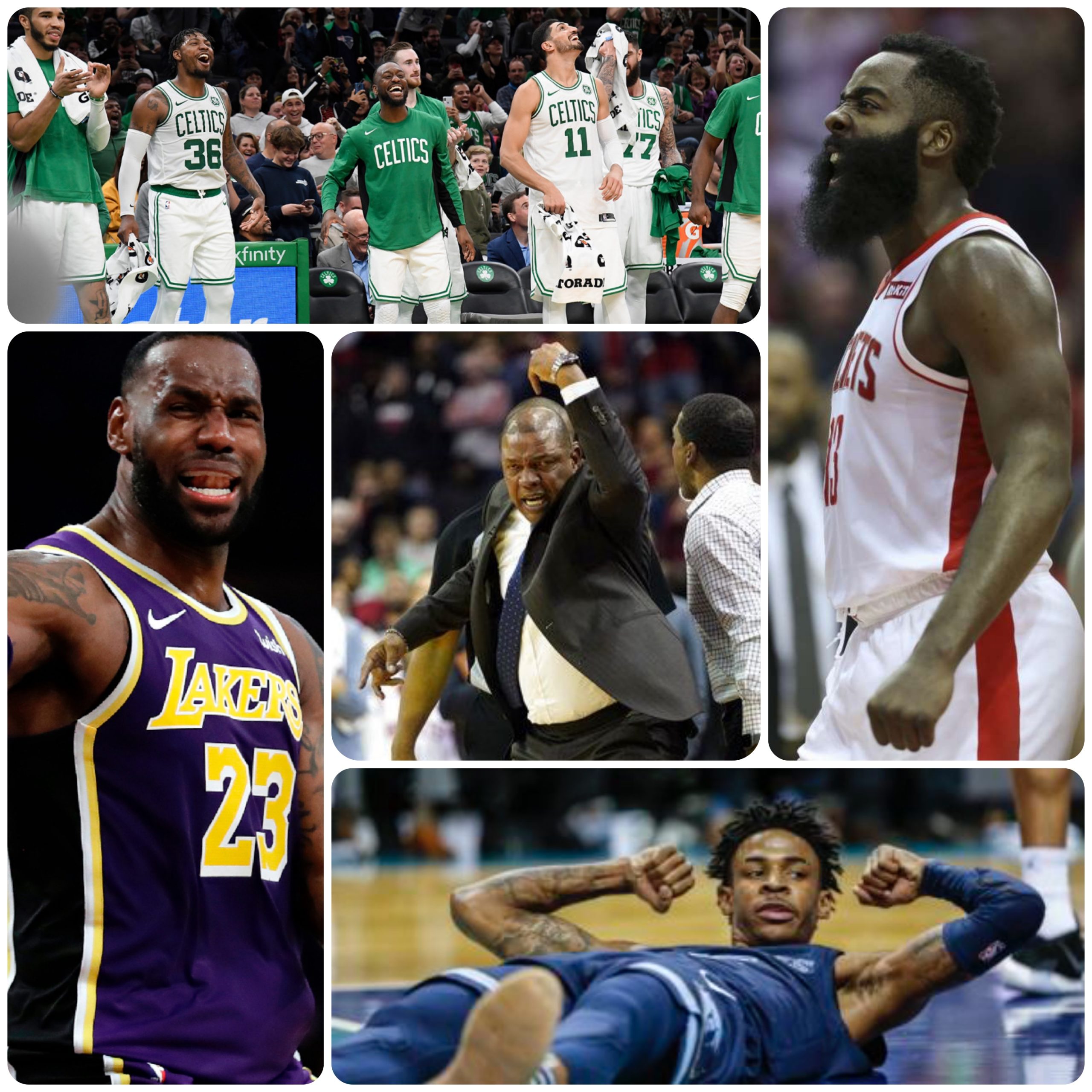 The Boston Celtics are the best in the NBA, the Lakers are close behind, and James Harden's Rockets are closer than you think.

Are you not entertained?

The Celtics are the best team in the NBA, the Lakers are close behind, and it’s a good thing the Golden State Warriors are so soft, and that Pelicans have so much down and feather, or the Portland Trailblazers might not know they’ve about hit rock bottom.

Think that Joel Embiid isn’t an MVP candidate? Ask the Philadelphia 76ers, who were without their big man last night in Orlando … same results as when he was out when the 76ers went out west to Phoenix during Embiid’s two game suspension.

With no one to patrol the paint, Nikola Vucevic had a field day, scoring a game high 25 points and grabbing 12 rebounds, while Aaron Gordon flourished in the paint with 13 rebounds in the vacuum left behind by Embiid’s absence (sore left knee).

Seven Magic players scored in double digits, with Evan Fournier and Terrance Ross hitting for 13 each, 12 apiece for Jonathan Issac and D.J. Augustin (eight assists), and an 11 piece for Michael Carter-Williams.

Philadelphia tried to keep it competitive with James Ennis III finishing with 10 points and #VFL Tobias Harris going eight and 10. Both teams shot 44 percent from the field, but Orlando finished with more rebounds, more assists, more steals, and fewer fouls.

Oh bother. Can only think of Winnie the Pooh when you see the persistence as the Memphis Grizzlies chase their honey pot, which equates to wins. But even with a horde of Charlotte Hornets in the way, Memphis got the sweetness of their fourth win of the season while sending the Hornets to the same, sticky 4-7 mark.

The game was a breakout for rookie Ja Morant, who 66.7 percent to lead his team in scoring and to victory. Marko Guduric and Brandon Clarke matched his 66.7 percent clip off the bench; Guduric added 17 points and Clarke finished with 13 points and six rebounds.

Jaren Jackson, Jr. had 16 points and six rebounds on the night, while Dillon Brooks got in the books with 15 points.

Five Hornets got into the act, with Terry Rozier finally having his night, leading not only the Hornets, but all scorers with 33 in the loss. It was a career high for Rozier. Cody Zeller ended up at 16 and eight, while Miles Bridges contributed 14 points, four rebounds, and seven assists.

Celtics Show Why They’re No. 1

No disrespect to Gordon Hayward, but the Boston Celtics showed they can move on from almost anything, whether it’s Hayward’s broken hand or that 107-93 loss to the Philadelphia 76ers back on Opening Night, which seems like an eternity ago already.

That’s how impressive the Celtics are playing, as the Los Angeles Lakers, Houston Rockets, and Los Angeles Clippers try and keep pace in the Western Conference.

It’s not like they’re playing a soft schedule like Alabama’s football team does. I mean, yes, they got the Washington Wizards last night, but by comparison, the Lakers played Golden State last night, too. But the Celtics stood in the face of Bradley Beal’s 44 points while L.A. only really had to contain D’Angelo Russell.

Speaking of those Warriors, that’s Boston’s next opponent as they sojourn out West for five games, with cupcakes like Golden State and Sacramento up first, but with the Clippers, Phoenix Suns and Denver Nuggets to test Boston’s mettle.

With their big three combining for 70 points last night, and any one of them capable of a breakout 30+ night, it’s possible the C’s go 5-0 out West; I’m betting they underestimate the Suns or Clippers and come back to Boston 4-1.

All of this without Hayward. May have been a blessing in disguise.

Rockets Make Their Move, Put a Dent in the Clippers

Looking back to Los Angeles’ nationally televised game with the Milwaukee Bucks, where Kawhi Leonard took the game off for load management, one wonders if that messed with his rhythm – should he have taken the Portland game off instead?

He may have been less listless against his former teammates in the game against the Raptors, which seemed like an entire 48 minutes of load management for both teams.

He may have been better tuned and prepared for this two game jaunt through the Gulf of Mexico and for the more important game against the Houston Rockets, who have two juggernaut type players in James ‘Light Em Up’ Harden and Russell ‘Get Buckets’ Westbrook.

The duo combined for 64 points last night to keep Leonard and the Clippers at bay, and launch themselves ahead of the Clippers in the Western Conference.

While both teams shot only 38 percent, the Rockets took off from launch, going for 31 points in the first quarter to L.A.’s 15. The Clippers would outscore Houston 53-43 in the middle two quarters, but Houston stamped the Clippers out in the fourth to take the critical win.

Clint Capela hit 85.7 percent as no one impeded his dominance of the paint, despite the Clippers’ roster having a beast like Montrezl Harrell (four and nine off the bench). Ivica Zubac was no match, either.

Houston is now second in the West, behind that other L.A. team, while the Clippers stay moored at fifth place.

The San Antonio Spurs have dropped their third consecutive game and fallen a game below .500 in their wacky season, which began with them starting 4-0 and being the second to last team to fall from the undefeated ranks. And by fallen, I mean fallen.

San Antonio’s last win came a week ago when the rebuilding Oklahoma City Thunder came to town. Since then, they have registered losses to Boston, Memphis and Minnesota – two of those games coming at the AT&T Center in San Antonio.

Last night, the Spurs traveled to the Twin Cities with the burden of a .500 record in their luggage. The Minnesota Timberwolves showed no empathy for the legendary coach and organization, instead sicing Andrew Wiggins and Karl-Anthony Towns on them while wounded.

Jeff Teague also returned for Minny, scoring 18 and dropping six dimes to help the Timberwolves to their seventh win of the season and sixth place in the Western Conference. Jake Layman added 16 points, Jarrett Culver notched 12, and Robert Covington finished with 10 and five on the night.

Other than the Spurs’ top three, contributions were moderate at best. Dejounte Murray finished with 11 points, and it was 10 apiece from Rudy Gay and Patty Mills.

San Antonio has Orlando (away) and Portland (home) in the short term before they set out for a four game trip. The Magic and Blazers have been Jekyll and Hyde at best through the first 11 games of the season … just like San Antonio.

Kuz is Back, Davis Rests in Lakers Win

Yeah, LeBron James had to step back into his leading scorer role last night, but he got Kyle Kuzma off and rolling, and the Los Angeles Lakers cruised past the wounded Warriors by 26 to net their ninth win of the season and try and keep pace with the NBA-leading Boston Celtics.

Draymond Green and Willie Cauley-Stein contributed only 10 points apiece and combined for a mere six rebounds in the paint where Anthony Davis was absent (sore right shoulder) and former ring-bearing teammate JaVale McGee finished with 17 rebounds, 12 on the defensive end.

The Lakers got another nice kick from (former Lakers center) Dwight Howard; he had 15 points, eight rebounds and three assists in his continued Laker resurrection. Quinn Cook added 10 points off the bench.

It’s a good thing the Golden State Warriors are so soft, and that Pelicans have so much down and feather, or the Portland Trailblazers might not know they’ve about hit rock bottom.

After having visions of playing this Toronto Raptors team in a 4-7 game series last spring, the Trailblazers were bounced without a win against the Warriors and haven’t bounced back since.

They are a strong ‘four’ away from being a valid contender in the West and I’ve often said they need a player like Toronto’s Pascal Siakam on their roster. While Siakam is a fantasy, an impossibility, the Blazers could work a deal to get Draymond Green in a Blazers uniform. His competitive fire is what the Blazers lack.

It was no more evident than last night, when the Raptors outscored the Blazers 64-48 in quarters two and three to steal a game in the Rose City. Rockford, Illinois’ Fred VanVleet is relishing his role as a starter with the departure of Kawhi Leonard. He’s averaging 17.1 points, 4.2 rebounds, and 7.6 assists as the starting two guard (running the point with the injury to Kyle Lowry) and dropped a 30 piece on the Blazers last night.

Rodney Hood returned for Portland to lead the Blazers with 25, as the Blazers only got nine points from a guy who’d scored 10x that amount in his last two games – Damian Lillard (30 in his last game and 60 in the game before that). Mario Hezonja came off the bench for 10 in the loss, Portland’s second in a row and sixth in their last seven games.