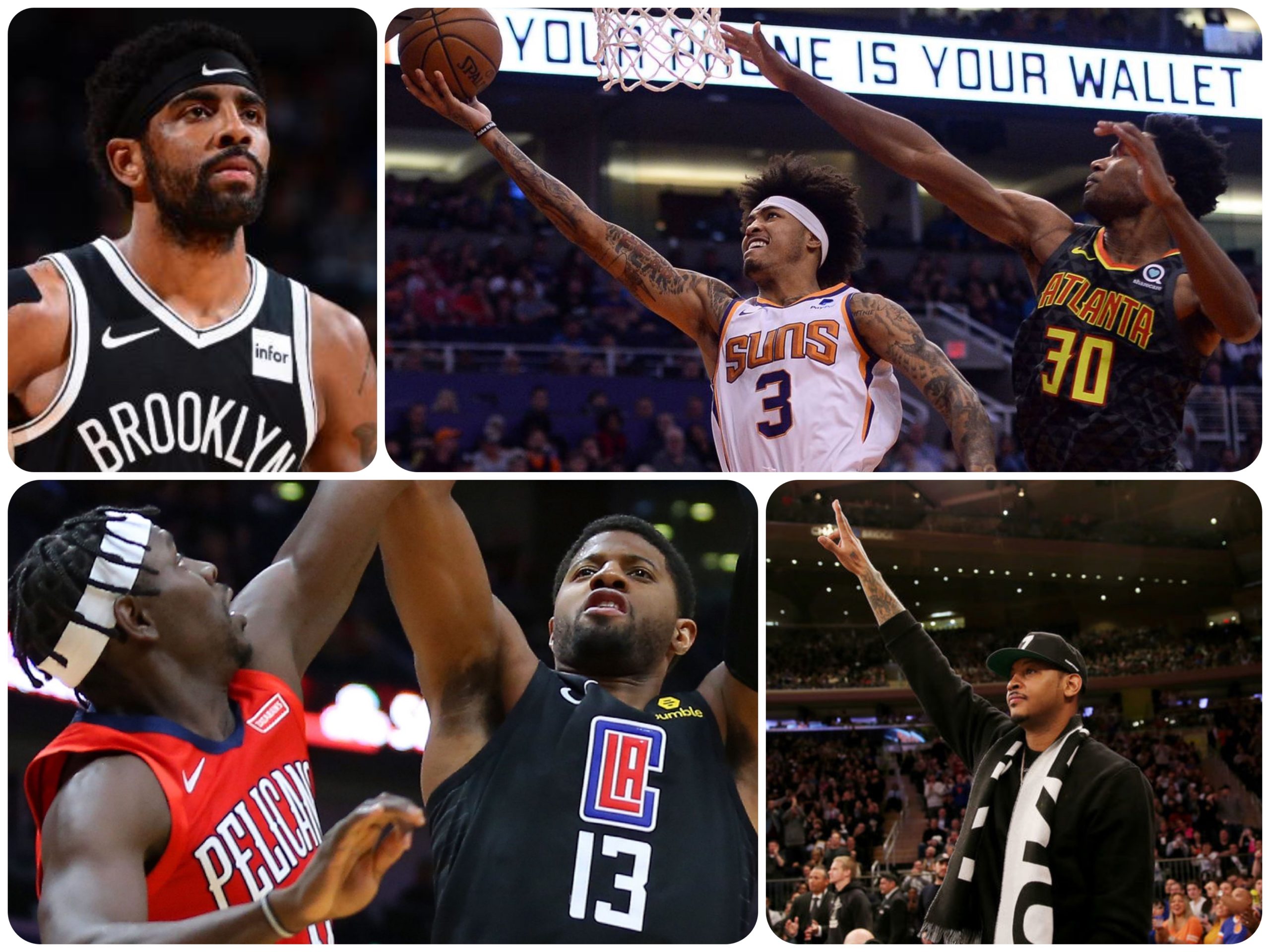 Me: Hey Siri … Who owns the Dallas Mavericks?
Siri: The New York Knicks

The Knicks beat the Dallas Mavericks for the second time this season, the Nets run out of gas in Denver, and don’t turn your back on the Miami Heat … they’re for real.

Miami has a glut of rookie and young players who can rise up and steal the show on any given night, Jimmy Butler is just the frosting on the cupcake. And the longer that continues, the more confident and dangerous the Miami Heat will be this season.

Last night, the young guns took their show to Cleveland to face the Cavaliers and didn’t disappoint, as the Heat raced out to a pair of 34-22 opening quarters to take a very comfortable lead into the locker room.

Taking a 68-44 advantage into the second half, the Heat were able to withstand anything the Cavaliers threw at them, still walking away with the 11 point edge and win. Butler did hit for 14 points, two rebounds and six assists, Meyers Leonard had 12, seven and three, and Duncan Robinson finished with 11 points.

Kevin Love continues to be a strong leader, but it’s difficult to tell when that will take its toll on a guy who is accustomed to winning and will eventually want to win. Since it’s my hometown team and Love grew up playing sports there (nearby suburb Lake Oswego, actually), I’m going to incessantly campaign for the Portland Trailblazers to make a move for Love, who’s averaging 18.5 points, 12.9 rebounds, and 3.4 assists this season.

Cedi Osman added 12, seven and one, Darius Garland was a solid 11 point night, Jordan Clarkson finished with 10, and it was nice to see Larry Nance, Jr. get back in the mix, though he injured his hand on a dunk in the fourth quarter.

The Cavs came home with a 2-1 road trip under their belt, the only loss to Philadelphia by one point; they’ll get their chance at redemption this weekend.

The argument continues about the use of load management, and I had a friend ask me last night, “is this going to be the new norm?” I think the bigger question is, couldn’t Paul George have scored 33 and nine in an Oklahoma City Thunder uniform with Russell Westbrook sitting out, and still lost the game? I guess the only solace is that George is in his home city …

You’d think that since Kawhi Leonard recruited Paul George to play alongside him in L.A., y’know, he’d at least play alongside him in his Los Angeles Clippers debut. Instead, Leonard left the onus of leadership on George’s shoulders and the New Orleans Pelicans – honestly the tenured Pelicans – took the opportunity to make a statement against the odds-on NBA Finals favorite, and they made it loud and clear.

New Orleans is getting tougher and tougher, despite their three-win record.

The fact that Jrue Holiday and Frank Jackson took over shows that, despite all the new faces, the guys that have been here a minute can get it done. Factor in the 20/20 double double from Derrick Favors, 19 points from J.J. Redick, and 15 from E’Twaun Moore, and the Pelicans dug in and wanted this more than L.A., despite shooting six percent poorer.

Montrezl Harrell finished with 18 points, seven rebounds, and six assists, as the Clippers head back to L.A. for five straight at home in Staples Center.

The Chicago Bulls are putting together quality games, the second consecutive of which Coby White has led the team in scoring, straightening the learning curve for the young North Carolina rookie and showing Bulls fans that – despite the eight losses – the future is in White’s capable hands.

Sounds nice, but a tough pill to swallow when you end up within nine of the team that is an Eastern Conference favorite to be in the NBA Finals this year. Especially since, with the exception of the third quarter, your team outscored with the Milwaukee Bucks, 95-92, the other three periods.

But that third quarter. Oh so costly.

The teams were tied at 82-82 halfway through the third, when the Bucks turned it around on the catalyst of a Giannis Antetokuonmpo dunk. The crowd got into it and the Bucks created their distance from that point on to outscore the Bulls, 32-20.

Wesley Matthews added 15 for the Bucks, on the foul line, Eric Bledsoe shot at an 85.7 percent clip, and while Khris Middleton sat with a thigh bruise injury expected to keep him out 3-4 weeks, Donte DiVincenzo started in his place and wrapped with a modest four points.

For the second time in the last week, the New York Knicks have live by their credo of beating Kristaps Porzingis and the Dallas Mavericks, completing a season sweep of the heavily-booed forward-center.

In what was a raucous Madison Square Garden and a decibel level like it was March Madness in the Garden, the Knicks played to the cheers of their rabid fans, while Porzingis overcame the emotion and cavalcade of boos everytime he touched the ball to score 20 on his former team.

Luka Doncic also had his fifth triple double of the season, but it wasn’t enough as the Knicks rode the wave of emotion to their third win of the season. Two of their three wins have come at the expense of the Mavericks.

Ownership and management may have given up on the season after 10 games, but the Knicks players themselves are far from laying down and waiting for a LaMelo Ball, James Wiseman, or Anthony Edwards type player to save them next year.

That’s been the mentality in New York for about two decades now. The Knicks haven’t look this competitive since the lockout shortened season under former head coach Jeff Van Gundy.

If they could only bottle last night – what a game. Great choice, TNT.

When you play the Phoenix Suns, you double down on Devin Booker, hoping to keep him under 40 percent shooting from the field and under 20 points at best. You also have to contain Aron Baynes, but then you forget that Phoenix acquired Dario Saric this past summer, too. That’s exactly what people like Kelly Oubre, Jr. lie back and wait for …

Oubre took the mantle last night in Phoenix, facing off with one of the league’s youngest scoring machines in Trae Young, and Jabari Parker, who’s in the midst of a career resurrection.

But it was the shooting of Oubre, Booker and Saric that gunned down the Hawks, an unprotected species with the way they’ve nosedived since their quick and encouraging start three weeks ago.

The Suns show 48 percent in their own house, with Saric hitting 75 percent, Oubre hitting 55.6 percent, and Booker right at 50 percent for a combined 60.2 percent among the trio. Frank Kaminsky also hit 66.7 percent for 19 points and six rebounds, while Cam Johnson chipped in a 15 point night off the bench.

Young and Parker were impressive as usual, shooting 46.0 percent between them, but average when it comes to their typical game(s). DeAndre Hunter and Damian Jones kicked in with 14 apiece in the Hawks’ effort. Cam Reddish had nine on a rough shooting night, and a later ejection.

It doesn’t get any easier with the Los Angeles Clippers up next this weekend, they themselves coming off a two game skid.

But the biggest number for Denver was 52 and holding the Brooklyn Nets to 32, in the second half. Brooklyn only scored 18 points in the third and 14 in the fourth to fall to their seventh loss of the season. The Nets had scored more than that in their 35 point opening quarter as they raced out to a 61-49 halftime lead before falling flatter than Kyrie Irving’s earth in the second half.

Taurean Prince finished with 12 and eight, and Dzanan Musa added 10 points off the bench for Brooklyn. Irving was the team leader, despite playing with shoulder soreness. (He had treatment before the game).

Denver had seven players finish with double digit scoring. Jerami Grant added 12 and six, while it was 10 apiece for Gary Harris, Mason Plumlee and Monte Morris.

The Rundown w/T-Money … for November 13, 2019
The Porzingis Prognosis