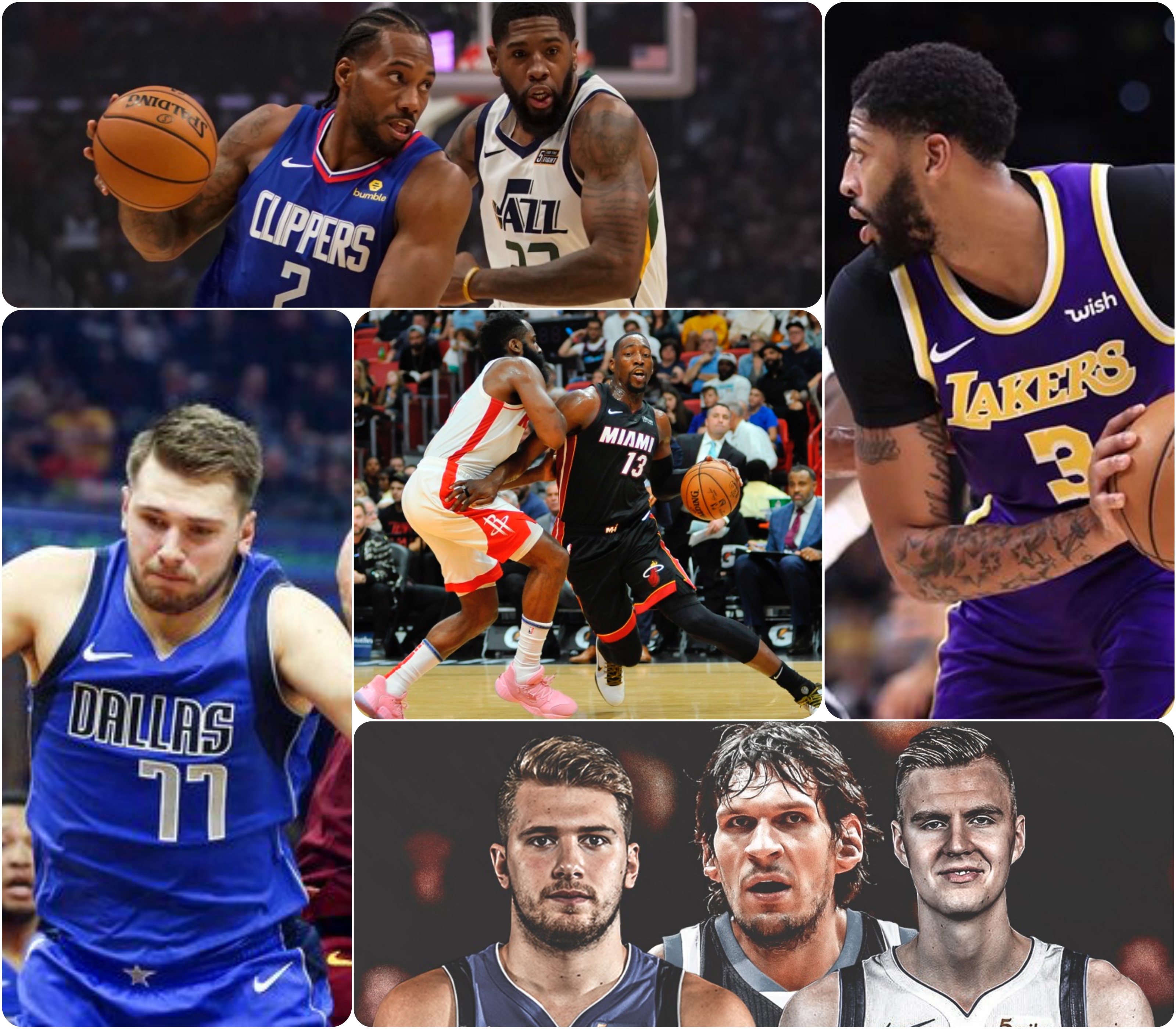 Dallas went with the Twin Towers look for 30 and 17, Luka Doncic and LeBron James are 1-2 in triple doubles, and Miami lays a 46 point first quarter on Houston.

Pacers are Indy’s .500 after Win over Bulls

The Indiana Pacers raced out to a 55-42 first half performance over the visiting Chicago Bulls and never looked back last night at Bankers Life Fieldhouse.

The Pacers, who had already been missing Victor Oladipo and Myles Turner, were also without Domantas Sabonis, missing with a calf strain. Malcolm Brogdon has already proven himself an asset through the Pacers’ first five games and last night was no exception.

But The T.J.s (Leaf and Warren) stepped up big to get the Pacers to the .500 mark in Indy.

The Bulls have played inconsistently at best all season long and lucked into two wins, but have been absolutely disappointing on the road. One of the lone bright spots on the roster is Wendell Carter, Jr., who is playing better than his career averages at 14.6 points per game and 9.4 rebounds a night.

He had 20 and 10 last night in support of Zach LaVine.

Lauri Markkanen (11 and six) and Otto Porter, Jr. (4-3-3) are underperforming at best as the Bulls languish through another 82 game season, that this year looks like a tank job.

I thought this was going to be an exciting game to watch. But watching the Miami Heat wallop the visiting Rockets with a 46 point first quarter was akin to watching the Mike Tyson – Evander Holyfield event back in the late 90s.

The Heat, in essence, bit Houston’s ear off last night.

James Harden may have improved his shot selection and percentage, and gone 14 of 14 from the free throw line, but he was only 33.3 percent from downtown and got little help from the rest of the Rockets, as they backslid to .500 on the season.

Miami, while having the services of Jimmy Butler to fall back on, have instead opted to allow their rookies and young guys to showcase their talents in the last few games – all wins, though two were against the Atlanta Hawks.

Tyler Herro (12-7-7 last night) and Kendrick Nunn (5-1-5 last night) put on a rookie showcase in each of their wins against Atlanta last week, but it was virtual walk-on Duncan Robinson who led the Heat last night. Robinson signed a two-way deal with the Heat in July of 2018, signed a regular contract in April of this year, and led the team to it’s fifth victory in six games last night against arguably one of the higher-scoring teams in the NBA.

The Rockets need more than 10-4-6 from Russell Westbroook and another nothing game (4-1-0) from recent millionaire signee Eric Gordon. It was two-way player Chris Clemons who was second to Harden on the night.

That’s not enough. In fact, if I’d been Mike D’Antoni last night, I’d have rested all my starters, including Harden, after spotting the Heat almost 50 points in 12 minutes.

Kings of the Road

The Sacramento Kings notched their second win of the season last night in the unlikeliest of places – on the road, and in Madison Square Garden.

Sacramento came into MSG with an energy unmatched by the New York Knicks, as they ran out to a 61-41 first half and never looked back in the second win of the season for head coach Luke Walton.

One has to wonder if Marcus Morris is regretting his decision to leave his contract in San Antonio before the ink even dried. The Spurs are 4-2, and could likely be undefeated still had they had the kind of numbers that Morris has in New York. The Knicks have one win with R.J. Barrett leading the way in statistics, with Morris close behind at 17.9 points, 5.4 rebounds and 1.0 assists per game.

Lakers Give Spurs Their Second Loss

A 30-18 second quarter put just enough distance between the Los Angeles Lakers and the San Antonio Spurs for L.A. to hand the legendary franchised its second loss of the young season.

Lost in the shadows of LeBron James and Anthony Davis has been the play of several veterans who’ve come on board to help the duo bring the Lakers back to prevalence, even the NBA Finals.

Avery Bradley, Kentavious Caldwell-Pope and Dwight Howard formed a core last night that ably supported James and Davis, combining for 44 points to nearly match the 46 that James and Davis put up.

Howard went seven-of-seven and also had 13 rebounds, rounding out the perception that someone, somehow has brought back the Orlando Magic version of Dwight Howard – at least when it comes to heart and hustle.

San Antonio was lethargic at best, with no Spur breaking the 20 point barrier, though Dejounte Murray seems to be rounding back into shape.

With last night’s impressive performance in Cleveland, Luka Doncic has taken the season lead in triple doubles with three under his waistband. LeBron James and Russell Westbrook have two apiece, and Nikola Jokic, Draymond Green and Kyrie Irving each have one.

The consistent improvement by last year’s Rookie of the Year have the Dallas Mavericks sitting in the fourth position in the Western Conference, a game behind the Los Angeles Lakers.

Doncic could possibly be a ROY who goes to the NBA’s Most Improved, though he might be hard-pressed to beat Indiana’s Malcolm Brogdon. His 26.7 points per game, 10.36 rebounds and 9.5 assists are head and shoulders above his career averages and having Kristaps Porzingis in the fold seems to have taken the pressure off the young forward.

Seven Mavericks scored in double digits last night, while a nice game from Kevin Love is lost in the Cavaliers’ fourth defeat of the season.

Expect the Cavs to try and get something for Kevin Love before All Star if things in Cleveland don’t improve. Personally, I’d put Love and Tristan Thompson on the block now.

Love would be a great fit in Portland, where he played his high school basketball.

40 in the Fourth Power Clips Past Jazz

When you’re trying to win a game on the road in a hostile environment, allowing your opponent to drop 40 on you when everyone’s tired isn’t the way to go if you’re the Utah Jazz and trying to make your move in the Western Conference standings.

With a glut of teams at the 4-2 mark through six games, Utah had its chance to move up to 5-2 and erase their first-week disappointment, but instead reached back to that disappointment with the same kind of game – where Donovan Mitchell and Bojan Bogdanovic doing the majority of your scoring while getting little help otherwise.

Two of Utah’s starters – Royce O’Neale and Mike Conley – combined for eight points (all Conley), while Mitchell shouldered the load once again.

Meanwhile, they Jazz allowed Kawhi Leonard to score 18 of his 30 points in a 40-25 fourth quarter performance for the Clippers. Without that 15 points edge, this would have been a ball game.

The Clippers’ bench showed out again, after two of L.A.’s starters combined for worse than O’Neale and Conley; they combined for four points (Patrick Beverley and Patrick Patterson).

The Clippers are still a game behind the Lakers, which seems to be the story of their franchise.

Prior to tonight’s game, it was announced that Ed Davis will be out for four weeks with a fractured fibula suffered Friday night in the loss to Sacramento.

Both teams  shot under 35 percent in the first half, playing to a 39 percent tie for the game, though the Clippers took 92 shots to Utah’s 78.

LAC outrebounded the Utah 54-37 in the game and forced 14 turnovers.