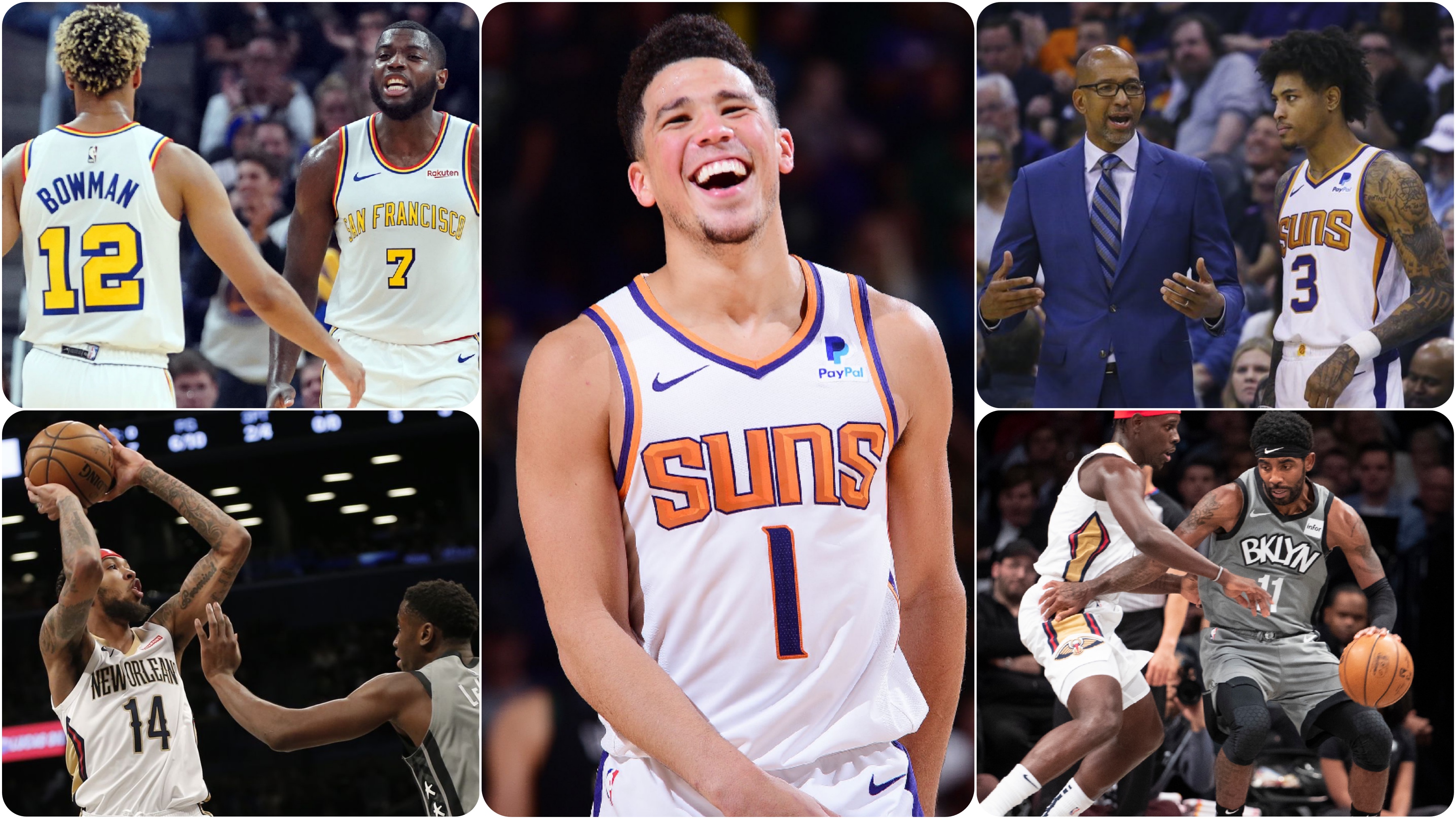 There are no more undefeated teams in the NBA, Golden State gets its first win at the Chase Center in four tries, and Brandon Ingram is becoming a beast for the New Orleans Pelicans.

Detroit’s ‘Check Engine’ Light is Back On

After the Washington Wizards failed to capitalize on a Minnesota Timberwolves team that was missing Karl-Anthony Towns due to suspension, they dismantled a Detroit Pistons team that – in their previous game – looked like they’d finally found themselves.

The Pistons could only muster 41 percent from the field as they sputtered to a 38 point second half while the Wizards went into overdrive scoring 52 in the same two periods and peeling away with their second victory of the season, while Detroit fell two games under the .500 mark.

While Luke Kennard dropped two dozen, it marked the first time that Andre Drummond didn’t have a game of 20 points and 20 rebounds. Drummond had been lining up to be the first player in 35 years to post four games of 20+/20+ but Thomas Bryant got in the way.

Former Oregon Duck Troy Brown stepped up big in a reserve role, shooting 50 percent on the night and four-of-four from the line. Rui Hachimura added a dozen and C.J. Miles came off the deep bench to match it.

The I’s Have It in Brooklyn

Brandon Ingram is really cementing himself as another former Los Angeles Lakers that “got away,” playing better for the New Orleans Hornets than he did for the Lakers; Julius Randle was another prior to him. Randle scooted off to New York in free agency – let’s hope the Pelicans can keep Ingram.

Ingram went toe-to-toe against one of the best in the game last night, however, and though Kyrie Irving didn’t quite match Ingram’s point output, it was one of the most fun games to watch in last night’s six set lineup.

It’s tough to watch the Pelicans go 1-6 because they truly are a locker room full of potential. Now, you can say the same about the two-win Sacramento Kings, too, if you’d like; but I’ll take my chances with New Orleans having a ton more upside and stability in the long run.

Playing without Zion Williamson, the Pelicans are utilizing the core of former Lakers (Ingram, Lonzo Ball, Josh Hart) to solidify a team that Williamson can step onto and take to the next level when the time comes. (Hint: Zion, it can’t come soon enough).

The Nets, while playing well last night, though on the winning end of the game, have more question marks than the Pelicans, it seems.

Brooklyn brought on Irving as the face of their franchise (along with Kevin Durant), but have yet to be a consistent competitor through the first 10 percent of the season. For all the talk on social media and advertising in the New York area, they are only two wins ahead of their crosstown cousins, the Knicks.

‘Owning’ New York, being in the Top Eight in your conference with a losing record, it’s not enough. It can’t be – not while the L.A. teams are a combined 10 wins while New York teams have four together.

There’s no glory of playing King of the Mountain atop a pile of manure.

The Nets need to step up bigger – December 17th looms on the calendar; we’ll see who’s the more improved team when the Pelicans host Brooklyn in the Big Easy.

No Westbrook, Gordon Steps Up, Rockets Get Back on Track

After a competitive first half (62-60, Houston) in which the Memphis Grizzlies actually had the lead on the Houston Rockets, the Grizzlies went into hibernation mode from the cold shooting, scoring only 40 points to allow the Rockets to steal what could have and should have been a Memphis win.

The loss was the Grizzlies’ fifth, while the Houston win puts the team back above .500 without the services of Russell Westbrook (load management).

The Rockets actually shot poorer at 37 percent compared to Memphis’ 42 percent, but won because they were better from downtown; Memphis shot only 12 percent from the arc, while Houston hit 34 percent.

The Grizzlies also won the battle in assists and steals, tied the Rockets at 51 in rebounding, stats which should have head coach Taylor Jenkins scratching his head as to why the Grizzlies gave up the ‘W.’

Not one player for Houston shot above 50 percent on the night (Clint Capela and Thabo Sefolosha were the only two right at 50.0, everyone else below – some well below) while Ja Morant and Bruno Caboclo both hit for 62.5 percent.

Eric Gordon finally started earning his pay extension and Ben McLemore scored 12, but also had one of the most boneheaded plays of the game when he was dunked on by Dillon Brooks and then inbounded the ball directly to Brooks, resulting in four Memphis points in about 1.5 seconds.

Memphis had six players score in double digits, but lost the game. Gotta answer questions like that to be better than 1-5.

All Lanes Open Without Towns

The northern part of the country may be going through a cold snap, but conditions were favorable for the Milwaukee Bucks as they traveled to Minneapolis and snagged their fifth win of the season at the expense of the upstart Minnesota Timberwolves last night.

With Karl-Anthony Towns serving the second of a two-game suspension for his brawl with Joel Embiid, the paint was Giannis Antetokuonmpo’s to dominate, as the reigning MVP went ham for 34 points and 15 rebounds against a hapless Gorgui Dieng (10 points, six rebounds, four assists).

The Timberwolves may have been better off if they’d inserted Jordan Bell into the starting lineup last night, who had a better night off the bench than Dieng did starting. Antetokuonmpo shot the lights out at 73.7 percent, while Khris Middleton wasn’t far behind at 60 percent.

Donte DiVincenzo continues to open eyes, adding a 17 and seven game to his resume.

Minnesota’s only true shots came in shooting themselves in the collective foot by hitting only 37 of their 103 shots in their own crib. Milwaukee hit 53 percent without Towns there to defend, crooked baskets or not. The Bucks also came away with 10 more rebounds.

Towns will be back on Wednesday when the Timberwolves head to Memphis to take on the Grizzlies. Expect there to be hell to pay as (1) it’s his first game back, and (2) it’s the Grizzlies.

The excuses will come that Joel Embiid wasn’t in the lineup because he was serving Game Two of a two-game suspension for a fight with the guy in the previous game capsule (see above), but that’s just an excuse – Devin Booker would have just shot over him anyway, and still the Suns would have kicked Philadelphia’s asterisk.

Booker shot 78.9 percent (15-of-19) from the field and 75 percent from downtown Scottsdale to lead the Phoenix Suns to 5-2, but more importantly, a big win over the previously undefeated Philadelphia 76ers last night at Talking Stick Resort Arena.

And my colleague said Booker’s skills were declining; you stick to what you do, Josh, I’ll stick to the truth.

Aron Baynes and Mikal Bridges went for 66.7 percent and Kelly Oubre, Jr. contributed at the high rate of 55.6 as the Suns scorched the nets at a 53 percent to 47 percent clip. They took the rebounding title on the night, too, despite both teams playing without their signature center(s).

Phoenix outassisted and outblocked the 76ers, and had fewer fouls and turnovers. They got to the line 27 times for 77 percent compared to Philly’s 60 percent on seven fewer trips to the charity stripe.

As if Book wasn’t enough, Ricky Rubio resurrected himself and his career, posting ‘Minnesota Ricky’-like numbers at 21-7-10. Oubre finished at 14 and six.

The Phoenix win left solid performances by Al Horford, Furkan Korkmaz and #VFL Tobias Harris in the desert dust. Unfortunately, those were the only three as they got little help from the rest of the Philly roster, in which no one scored above eight points and they only combined for 33 points between the seven of them.

Warriors Still Own the Blazers

Golden State swept Portland in the Western Conference; though the Warriors don’t have the same roster at all (Big Three injured, nine new faces), it seems they still own the Portland Trailblazers.

It’s been said that these San Francisco fans in the Chase Center aren’t anywhere near the same fans that showed up year after championship year in Oakland’s Oracle Arena. Guess what, these Golden State Warriors aren’t your same Golden State Warriors either. This Big Three ain’t your Big Three, but they got the job done last night.

Chuckle all you want at what I’m about to say, but the Golden State Warriors have a new Big Three. Now, Eric Paschall and Ky Bowman and Damion Lee may not ever be Stephen Curry, Klay Thompson, and Draymond Green … but last night they were in their own right as the second string Big Three delivered Chase Center fans their first win in the new arena in downtown San Francisco.

As young and inexperienced as these boys are, they stood in the fire and grinded out a win in the face of Dame Time, something the Oklahoma City Thunder with Paul George and Russell Westbrook failed to do last spring. They also took a licking inside the paint from Hassan Whiteside and kept on ticking.

They outshot the Blazers, 48 percent to 44 percent, and stuck it to Portland at the line by hitting 91 percent of their free throws. They also shared the ball as they had 28 assists to Portland’s 16.

I don’t know what aspirations and plays run through the minds of these young Golden State Warriors, but seize the opportunities, despite the naysayers.

Time for the Bay Area to bring back Journey’s “Don’t Stop Believing.”