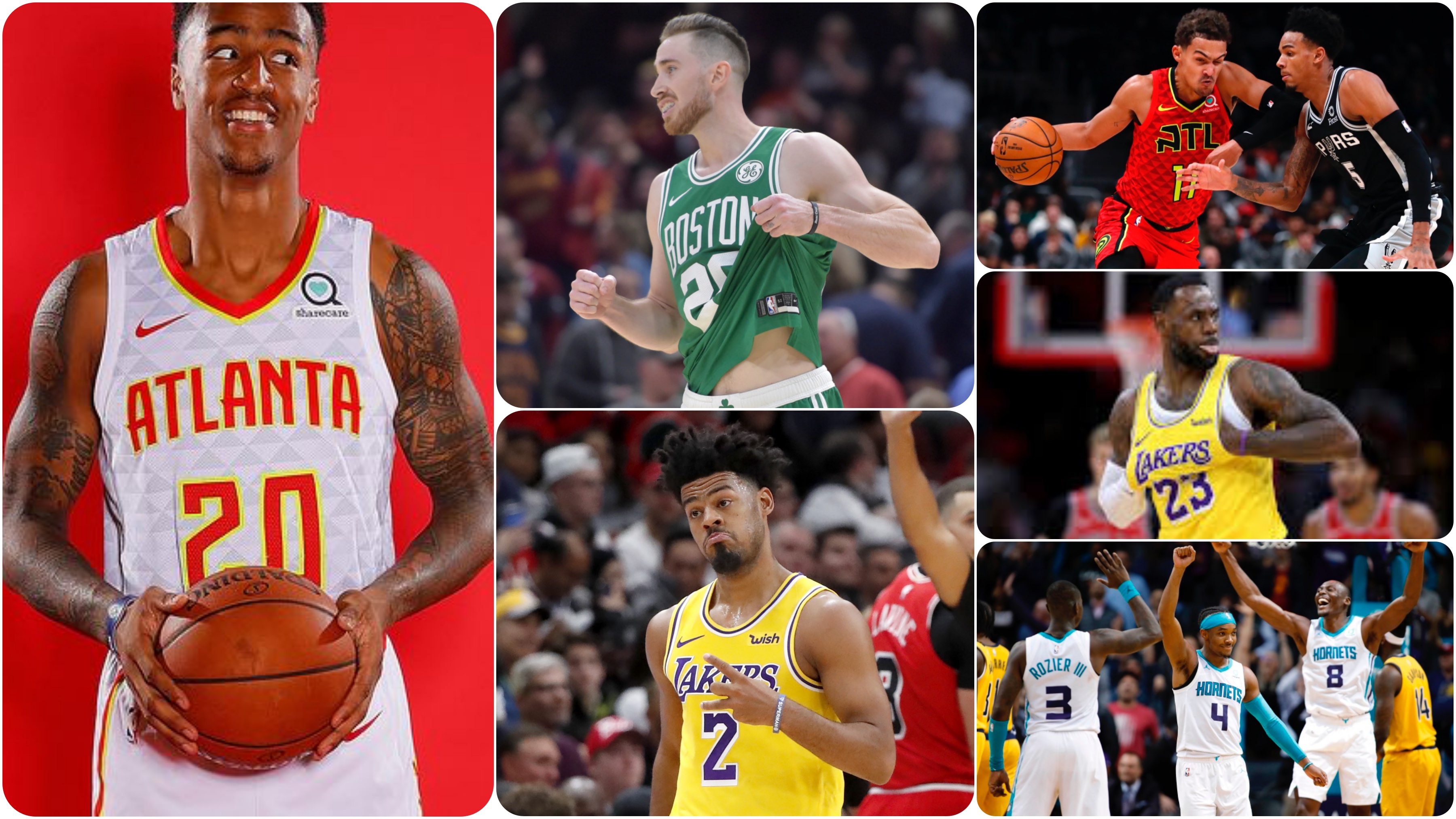 Atlanta gets Trae Young back but loses John Collins, the Lakers are 6-1, and Gordon Hayward and Devonte' Graham have career nights.

It’s nice to go through the phases of autumn in the Northeast – the leaves fall off, and so do the pretenders and also-rans as the NBA season progresses, and team’s true colors show.

Last night it was the Cavaliers showing who they are and have been since LeBron James departed, and falling off like they do every fall since.

However, Boston Green shone bright in Cleveland last night, particularly Gordon Hayward, who played his best game since a 39-point effort versus the Minnesota Timberwolves back on April 7, 2017 when he was a member of the Utah Jazz.

He shot 14-of-22 that night, but was a blazing 85 percent from the field last night, shooting 17 of 20 and perfect in his four trips to the free throw line.

Kemba Walker and Jayson Tatum combined for 43 points in support, and rookie Carsen Edwards finished with 13, one and one.

Collin Sexton continues his evolution, and Tristan Thompson and Kevin Love should continue to be trade bait – Thompson needs to go to Orlando and Love to Portland. Larry Nance, Jr. had 15, and Cedi Osman and Jordan Clarkson each had a dozen, as Cleveland matched every move with Boston in quarters 2-3-4, but lost the first quarter and could never catch up to net the upset.

Graham More than Pacers Can Handle

If you look at Devonte’ Graham’s NBA/G League rap sheet, you’ll see how many times he went down to the G League’s Greensboro Swarm. The No. 34 pick of the 2018 NBA Draft was taken by Atlanta, then swapped to Charlotte for a couple of second rounders, and then Graham was sent down to Greensboro at least 10 times during the 2018-19 NBA season.

Looks like his time there served him – and the Charlotte Hornets – well. He came up big last night, and has been solid all season long

Graham and reserve center Bismack Biyombo (15 points, six rebounds)  were the worker bees in the fourth quarter, as the Hornets put together a 35-21 fourth quarter to erase a 14 point Indiana lead and kick the game into overtime for the close win and to pull a game above the .500 mark.

Graham sank two free throws with 1.7 second in the overtime period to seal Charlotte’s fourth win of the season.

The young guard is proving to be the piece missing after Charlotte traded Kemba Walker for Terry Rozier, whose play is improving as he settles into his new role and locale. But Graham leads the team with 17.3 points per game. He also is averaging 3.9 rebounds and 6.7 assists.

For the Pacers, life has been tough without Victor Oladipo, Myles Turner, and Domantas Sabonis. T.J. Warren has been a champ and the play off Malcolm Brogdon has Most Improved written all over it. If these guys can maintain their health, they should be a very dangerous team when all are healthy.

The news of the night didn’t start out good as Atlanta Hawks forward John Collins was suspended 25 games without pay for a violation of the NBA’s anti-drug program. Collins tested positive for growth hormone-releasing peptide-2, which he claims came from a tainted supplement. He will appeal.

The good news was that Trae Young is back, and led the Hawks back to their winning ways that came to a halt when he got injured against the first of a back to back set with the Miami Heat last week.

Though he facilitated in the first half, it was the second half where Young soared, dropping 28 of his 29 points on the Spurs in the final two periods to give the Hawks a 64 point second half after the Hawks put up a very average 22 points apiece in the first two quarters.

Cam Reddish shot 66.7 percent and went 12, three and one starting alongside Young, while Jabari Parker and De’Andre Hunter kept the Hawks in the game. Vince Carter, Deandre Bembry, and Kevin Huerter added seven each to the effort.

San Antonio had a tough time getting LaMarcus Aldridge, Dejounte Murray and Derrick White going; the trio combined for just 22 points, 10 rebounds, and 10 assists as San Antonio fell to their third loss of the season, losing three of their last four games.

LeBron, Lakers Too Much for Bulls

Give the Chicago Bulls credit, they forced LeBron James into his third straight triple double to beat them last night at the United Center. Nah, I’m just bullsh***ing … it’s LeBron James and the Lakers, man. Anthony Davis and Quinn Cook are hitting, and Kyle Kuzma is back.

You thought the Lakers were dangerous before? It’s just getting started.

In all seriousness, though, the Bulls themselves are looking better and better with each game. While Wendell Carter, Jr. has been the consistency that this team needs (and Otto Porter, Jr. should be), Zach LaVine is its star and Coby White and his super afro have the opportunity to be Co-Rookie of the Year.

Carter had 11 and 11 last night as the Bulls raced out to a 65-48 first half advantage, giving folks in the United Center something to cheer about; and false hope.

James and the Lakers would explode in the second half with a 70-47 response, with James netting his third triple double in a row and leading the Lakers to the expected win.

Kyle Kuzma is rounding back into form – Kuz had 15 and four on 43.8 shooting last night, scored 11 of his points in the fourth quarter. And JaVale McGee, who made it look oh so easy with the first alley-oop bucket of the game, added 10, six and three.

L.A. is off until Friday, but the Bulls swing back into action tonight in the ATL.

Casper Not Enough in OKC

It’s good to finally see Aaron Gordon stepping up into the limelight that honestly should be his in Orlando; unfortunately, last night’s team-leading effort of 15 points wasn’t enough as the Oklahoma City Thunder put Orlando three games under .500 while increasing their own percentage(s).

Not only was Gordon’s effort right around average for NBA standards, but four other players took it upon themselves to only score 13 points apiece – maybe an homage to the departed Paul George? Who knows.

Jonathan Isaac, Markelle Fultz, D.J. Augustin, and Al-Farouq Aminu all dropped 13 points apiece on the Thunder, who don’t know that they’re supposed to be the team three games below .500 given their depleted roster and rebuilding process after the departures of George and Russell Westbrook.

Isaac added 10 rebounds and Fultz is slowly but surely becoming an NBA point guard; he had three rebounds and four assists.

But it’s the mentorship of Chris Paul that’s got the Thunder winning games they thought they wouldn’t. With Paul’s leadership in the OKC locker room, Shai Gilgeous-Alexander is molding into the team face the Thunder see in him, Darius Bazley is poised to have a break out rookie season, and Dennis Schroder has already stepped up and led this Thunder team in a couple of games.

Of course, it doesn’t hurt that CP3 dropped eight of his points in the final two minutes to underscore that leadership. Actions speak louder than words most times.

Steven Adams returned to pst an 11 and 11 night, while Bazley went for 10 and six in the win.

Two of the NBA’s best producing teams went at each other in the Mile High City in last night’s nightcap, with the Denver Nuggets rolling out the welcome mat to the Miami Heat and then beating them by a 20 point margin that was put together in the second and third quarters. Both teams came out 5-2 in the end.

The Nuggets and Heat played to a 29-28 first quarter, with Denver taking the edge into the second, where they outscored Miami by nine points. They came out from the locker rooms after halftime and laid another two by four on the Heat, outscoring Miami 31-21 to salt the game away. Both teams hit 20 in the final period.

Miami was led by Jimmy Butler, but they should go ahead and let their rookies lead like they have the past three games, all wins. Not saying Butler isn’t worth it (I may have arguments from Chicago, Minnesota, and Philadelphia that say he isn’t worth it), but what a nice back pocket option to have. After all, Butler treated the Heat as a back pocket option the first week of the season.

Just goes to my infinitesimal point that while he may be an All-Star in the weaker Eastern Conference, Butler is not the leader he thinks he is.

If you want to see leadership, look down to the other bench. Jamal Murray. Nikola Jokic. Hell, even Will Barton and Gary Harris. They are the reason(s) that the Denver Nuggets have gone from laughing stock to one of the best teams in the NBA.

Jimmy Butler and Kelly Olynyk (who should have stayed in Boston) aren’t going to get it done for Miami. Obviously.