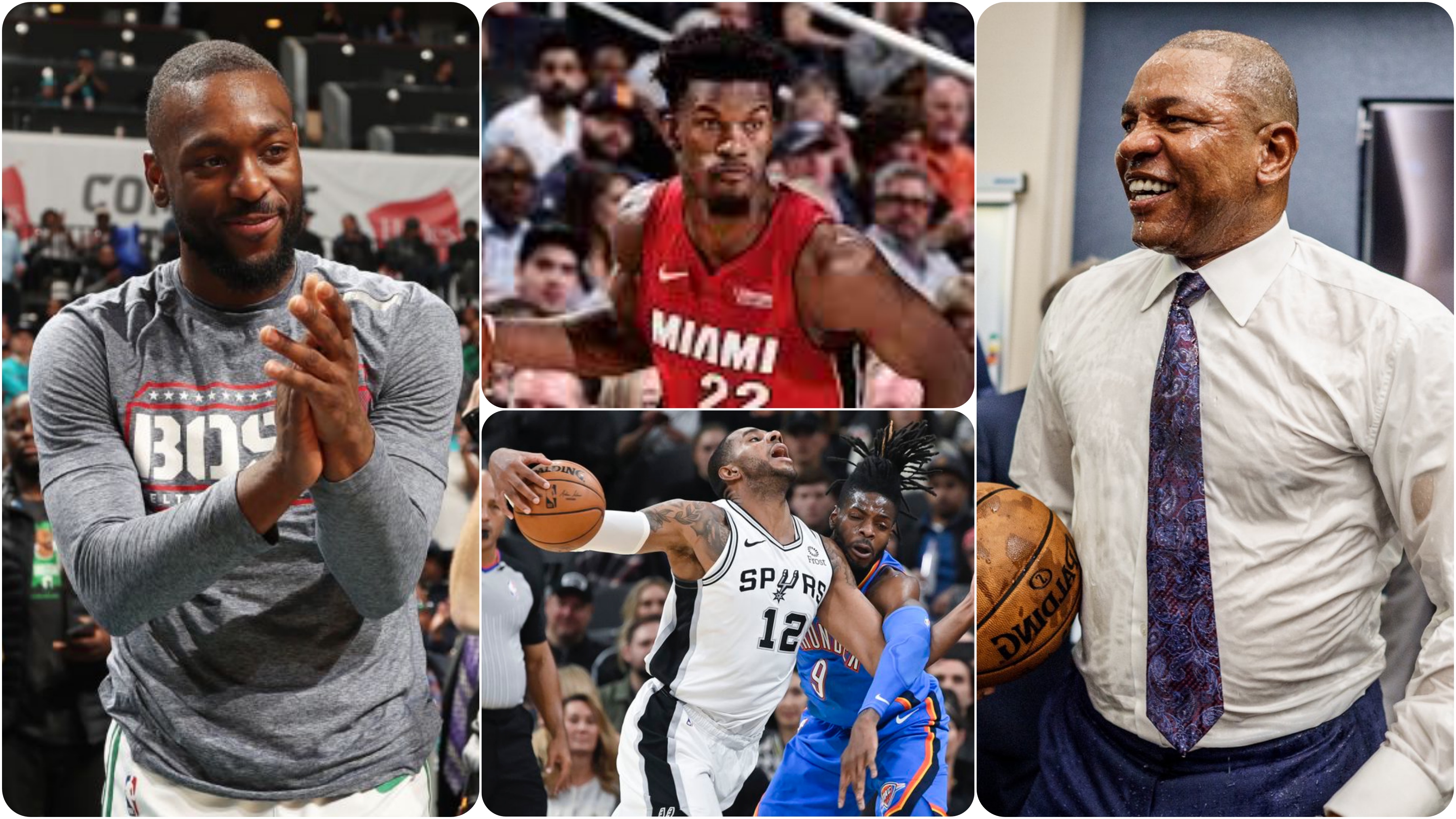 Miami blows past the Suns, Kemba Walker returns to Charlotte, LaMarcus Aldridge gets 39, and Doc Rivers gets his 900th.

Kemba Walker said he “couldn’t hold it in.” After spending eight years in Charlotte, Walker seemed a bit out of place wearing Boston’s white and green instead of Charlotte’s purple. But you wouldn’t have known it by the reception he got from Hornets’ faithful, who gave Walker a rousing tribute. Jayson Tatum and Gordon Hayward, however, went unaffected.

The duo combined for 51.7 percent shooting on the night as the Celtics shot out of the gate to a 30-20 first quarter blitz and led 52-43 going into halftime. They then came out and squashed the Hornets, 56-44 in the second half behind a strong third quarter performance.

Jaylen Brown and Javonte Green also added 12 points apiece on the night, Green’s off the bench.

Charlotte didn’t seem to put up much of a fight, though, whether out of respect for Walker and/or the Celtics, who are the Eastern Conference’s best team at this point.

Only Devonte’ Graham and Miles Bridges hit double digits – 12 Hornets played, the other 10 averaged 5.4 points in a lackluster support performance, their output nowhere near the 4-3 record coming into the game.

Charlotte slips back to .500

After playing to a 57-56 first half lead, it looked as if another sub-.500 team was going to take its shot at the San Antonio Spurs. Tired of playing patsy, the Spurs turned it on in the second half to subdue the Oklahoma City Thunder with a 65-55 second half, powered by a 36-27 third quarter.

LaMarcus Aldridge’s performance was a season high and Dejounte Murray seemed to have found his old self, put the brakes on his recent turnover surge, and turned them into assists, many of which benefitted Aldridge.

Five Spurs hit double digit scoring, with Bryn Forbes and Patty Mills hucking in 14 and 10 points, respectively. Jakob Poeltl came in off the bench and did the work on the glass, grabbing six along with Aldridge, Forbes and DeMar DeRozan.

The Thunder thought they were in this thing and put forth a gallant effort with six people hitting double digits. Hamidou Diallo and Dennis Schroder added 11 points apiece, and Steven Adams finished at 10 and five on the night. Danilo Gallinari matched Adams in rebounds, but the Thunder got beat in that department, 47-31, as Aldridge filled the paint and the bucket all night long.

Butler is the Leader I Said He Wasn’t

I stand corrected on Jimmy Butler – he can lead a team in something other than missed games for no reason. Last night, he went into Phoenix and went toe to toe with Devin Booker’s Phoenix Suns, and while it was a bout that would go neck and neck through the distance, it was Miami who threw the haymaker in the fourth quarter to fly out of the Valley with a win.

Once again, it seems that when I’ve called people out, the cosmos reach out to them and they bounce back with a vigor. Butler punctuated, boldfaced, and highlighted that theory last night when he went out and scored 30 of his 34 points in the first half.

Goran Dragic took over in the second half, dropping 20 of his 25 on his former team in the building where he’s played half of his career. Bam Adebayo nearly had a triple double, and lest I forget the rookie squad, Tyler Herro added 17 and Kendrick Nunn contributed 11 points.

The Suns were no slouches, in this game through three, down only by seven entering the fourth quarter. Ricky Rubio was 11, 11 and six, while Tyler Johnson chipped in 11 of his own.

When you have a shooter like Booker, seven doesn’t seem insurmountable with 12 minutes remaining.

However, Miami scorched the Suns with a 31-22 performance to sear Phoenix and end its win streak.

Thanks to a third quarter where the Portland Trailblazers outscored the Los Angeles Clippers by 13, 36-23, the Blazers were on the top side of the host Clippers, 76-70, heading into what looked like more of a sunset cruise into a win than the Catalina Wine Mixer.

That’s when the Clippers went full sail and took aim at the Blazers, pushing past Portland with a 37-25 quarter of their own in the fourth to glide past Portland and cruise to their sixth win of the season. The only team that L.A. is chasing these days is that other team from L.A. – an all too familiar setting.

Anfernee Simons scored 16 of his 17 points in the fourth quarter for Portland, but that’s because team leaders Damian Lillard and C.J. McCollum were shut out in the fourth. Hassan Whiteside also scored 17 and had 19 rebounds in a losing effort.

The Clippers came down from an eight point deficit with their strong fourth quarter response. Lou Williams seemed to go stride for stride with Kawhi Leonard last night, and Montrezl Harrell matched Ivica Zubac’s 15 points. The Clippers won the battle of the boards, 57-51, with 13 each from Leonard and Zubac, and 10 off the bench from JaMychal Green.