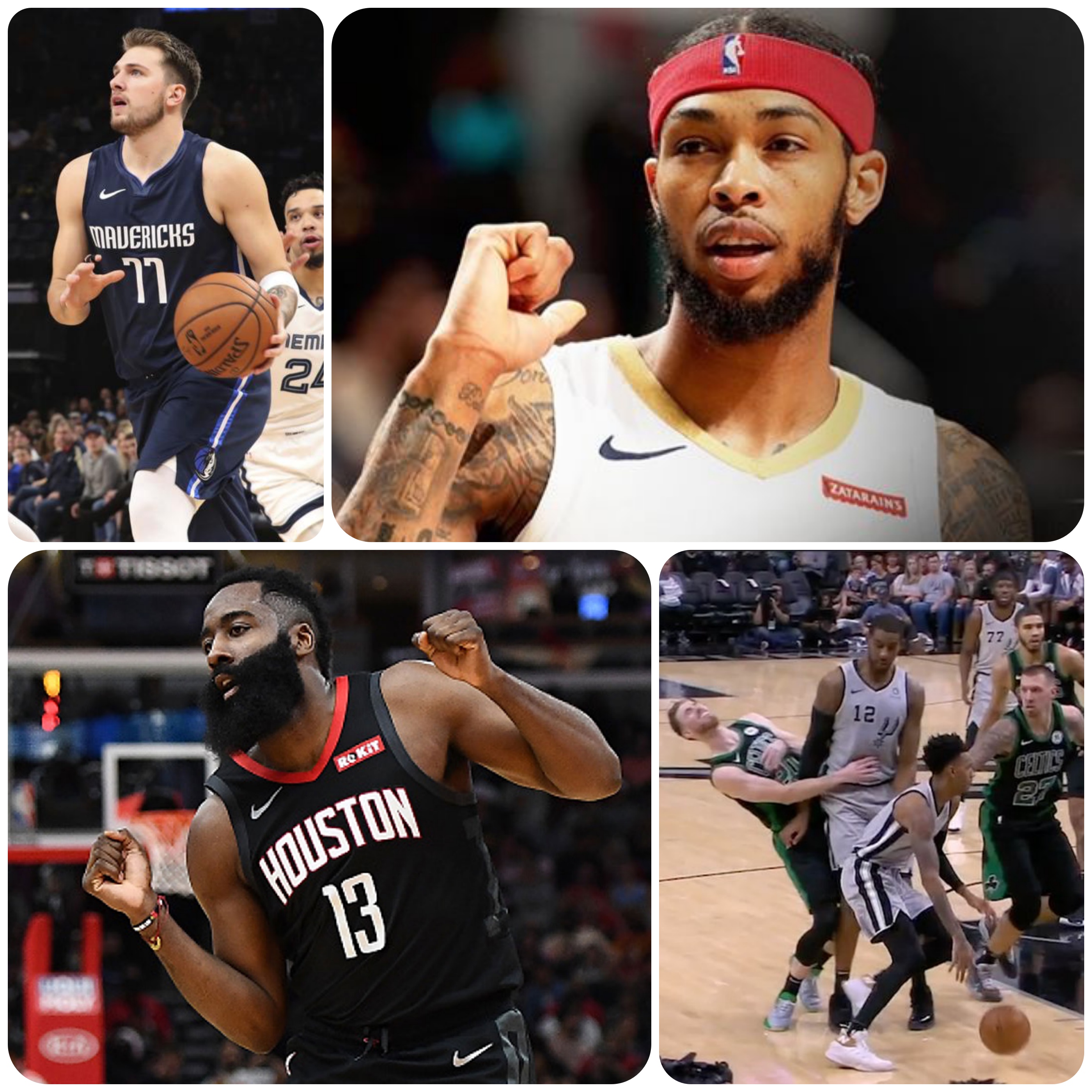 Brandon Ingram helps New Orleans to its second win, Gordon Hayward suffers a fractured hand, while James Harden and Luka Doncic lead their teams to the top of the Southwest Division.

Gordon Hayward, Stephen Curry and Kurtis Blow? What do these three have in common? These are The Breaks …

If there was any doubt that the Boston Celtics were for real, then yesterday afternoon’s throttling of the San Antonio Spurs should have erased any doubts in that train of thought.

However, since it’s 2019 and we’re talking Lakers-Celtics again like it’s 1988, if there was ever any doubt as to which team God is a fan of, then I’m going to have to assume – once again, like 30 years ago – that it’s the Los Angeles Lakers.

Why else, then, would He allow Gordon Hayward to suffer a fractured hand in the early part of the season? Wasn’t it already enough suffering for Hayward, the Celtics, and their fans when he went down in his first game as a Boston Celtic and spent a year out recovering from a horrific leg injury?

And then the punishment of spending a year with Kyrie Irving as he was trying to reassimilate himself with the NBA game after a year’s absence?

The Lord really has it in for Gordon Hayward.

But Hayward’s team stepped up against one of the best coached and best run franchises in all of sports, and left the San Antonio Spurs just one game above .500 after they started the season unblemished through their first four.

Ingram Leads Pelicans to Second Win of the Season

Despite a fantastic performance from Devonte’ Graham, the New Orleans Pelicans got their second win of the season at the expense of the poor-shooting Charlotte Hornets, and a nice outing from Brandon Ingram. Again.

Graham’s heroics shot the Hornets out to a 61-55 first half performance, but the Hornets lulled themselves into a near coma in the second half, outscored 60-49 by the Pelicans with no epi pen in sight.

Forty percent shooting in their own hive while the Pelicans dove in and hit 53 percent of their 75 shots (13 attempts fewer than Charlotte) is what killed the Hornets.

New Orleans also had six players his double figures, including all five starters and Josh Hart off the bench. In addition to the top three, Jrue Holiday hit for 12, five and 11, while it was 10 apiece for Hart and Derrick Favors, who went 10 and 10. Kenrich Williams shot 75 percent and Ingram was at 66.7 percent on the night

Rockets Launch on Bulls in Second Half

The game between the Houston Rockets and the Chicago Bulls was a virtual wash after the first half of play. But the Rockets turned on the afterburners in the second half with a 67-45 blast off that left the Bulls and their fans feeling like they’d just gone for an unexpected flight in the vomit comet.

It didn’t help that the Bulls underwhelmed once again in their own crib, shooting 10 percent less than Houston’s 47 percent night. They also got outrebounded 55-46 thanks to a stellar night from Clint Capela’s 20 rebounds (15 defensive) and James Harden flirting with a triple double like he thinks he’s some bearded version of Russell Westbroook.

Harden added 10 rebounds (nine defensive) and shot a respectable (for Harden) 44.4 percent on the night. He got help from Westbrook’s 26 points on 10 of 20 shooting, and Danuel House, Jr., who had 11 points and six steals.

The Bulls featured seven people in double digit scoring, but it doesn’t help that your high scorer scores 13 and three others follow suit. Chandler Hutchison started and also jumped into the ‘13’ crowd, while Zach LaVine scored 11, and it was 10 apiece for Coby White and Tomas Satoransky.

The Bulls have a shot at redemption against the Knicks this next Tuesday night.

OKC’s 60-Point First Half is Enough

D’Angelo Russell was coming off a 54 point overtime game (loss) versus the Minnesota Timberwolves; he had to be tired. Nope, Russell led all scorers last night in Oklahoma City. So how did Golden State lose its eighth game in 10 tries?

Russell’s fatigue was prevalent and obvious as the Warriors couldn’t keep up with the Thunder, who ripped off a 60-43 first half.

Golden State responded with a stronger second half – outscoring OkCity 63 to 54 behind Russell scoring 17 of his 32 points in the third quarter – but by then it was already over, even though the Warriors led the Thunder by two at one point in the fourth.

For the Thunder, in addition to the top three, Steven Adams went for 13 and eight, and Shai Gilgeous-Alexander added 12, five and three.

Oklahoma City shot 54 percent, outrebounded the Warriors by eight, and had eight more assists. It doesn’t get any more basic than that. Just outdone by consistency.

Everything that has gone awry in the Memphis Grizzlies first 10 percent of their 2019-20 campaign could be summed up by everything that went right for the visiting Dallas Mavericks in last night’s game at FedEx.

Memphis lost the three point shooting battle by almost 10 percent, they were outrebounded despite having the big men like Jaren Jackson Jr. and Jonas Valanciunas, and committed way too many fouls by not playing proper defense.

As I’ve said a couple of time, the key to containing the Dallas Mavericks is to let Luka Doncic and Kristaps Porzingis get theirs, and shut everyone else down. Shouldn’t be hard to do, since many of the Mavericks players are either aging veterans or people who didn’t live up to expectations elsewhere.

Yet six teams have been unable to stop Dallas, is leading the Southwest Division along with the Houston Rockets and are only tied with the Rockets due to strength of schedule, otherwise the Division would be Dallas’.

A huge part of that is people underestimating Rick Carlisle’s ability to coach and get the most out of players.

The problem with not shutting down the Mavericks is that the wins give those other players on the roster confidence, aging or not.

For Memphis, this would have been as big a win as the 137-121 carnage in this very arena last Wednesday night.

Despite the Grizzlies having seven score in double digits last night, Ja Morant (load management) and Brandon Clarke (sore back) sat out, resulting in zero and zero. The rookie duo combined for 44 versus Minnesota Timberwolves.

Dillon Brooks also had a team high 31 against Minny, but only a nickel last night.