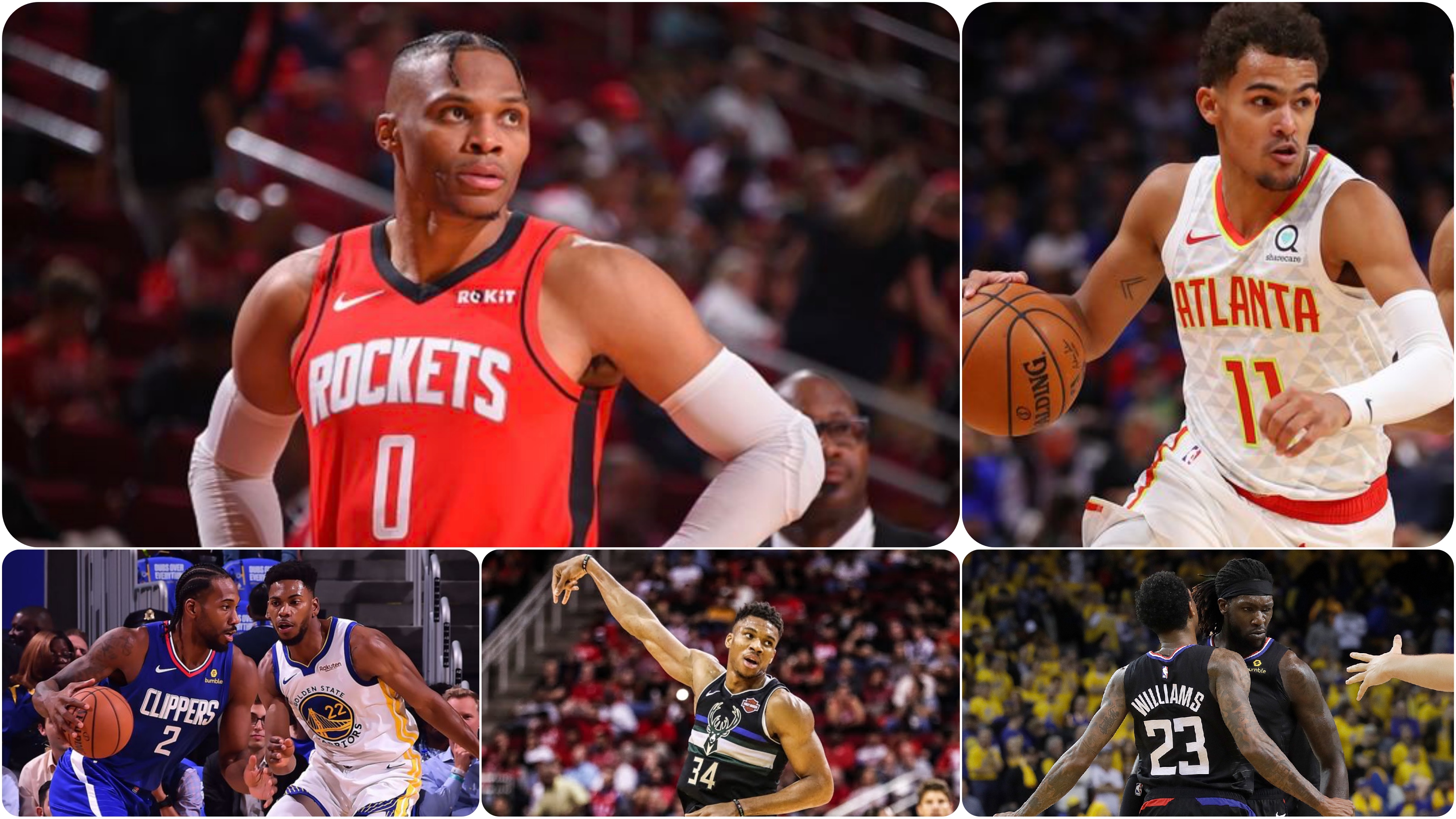 Mr. Triple Double was upended as Giannis Antetokuonmpo recorded the first triple double of the 2019-20 season.

The last three MVPs were on display in the NBA’s third night of Opening Week, all congregating in Houston, while the Hawks landed in Detroit, and the Clippers and Warriors kept true ballers up late on the East Coast in today’s run down of last night’s games. All road teams win in the three games on the list.

The start of the 2019-20 NBA season couldn’t have been scripted any better for the Atlanta Hawks, who swooped into The Motor City and stole a 17 point win from the 1-1 Detroit Pistons.

Unlike their nine-point, opening night win against the Indiana Pacers the night before, though they had the same Top Three, Luke Kennard’s shooting fell off against the Hawks at home. Kennard followed one of his best nights in the NBA with one of the worst, shooting just 25 percent on his own floor.

Meanwhile, Derrick Rose and Andre Drummond carried the weight, while the rest of the team barely mustered 39 percent of the point total, on 35-of-85 shooting … again, in their own building.

On the other side, I said in my pre-season preview of the Atlanta Hawks that this young core could be exciting, given the right direction and patience from both head coach Lloyd Pierce and the folks in the front office.

Watching Trae Young shoot with ease from almost 40 feet out and bury the three, it made me hearken back to this summer, when he kept his workouts flowing by going back to Oklahoma and playing all but anonymously in the Skinz League to sharpen his game.

To see that kind of young leadership, to see Jabari Parker bounce back, and to see De’Andre Hunter come out like he did, made me almost overlook the fact that Cam Reddish went 0-for-6 and score one point. Next time, Cam, next time.

In a game where the last three Most Valuable Player award winners were in the house, the most recent winner showed the other two why he’s Most Valuable, as the Milwaukee Bucks stifled a 16-point blast off from the Houston Rockets.

For anyone wondering how Russell Westbrook and James Harden would gel, one only had to see the dish (Harden) and dunk (Westbrook) at the 7:43 mark of the fourth quarter. Of course, as I mentioned on SB Nation Live on Wednesday night, I think they complement one another, with one able to pick up the slack when the other is struggling.

Such was the case last night as Harden’s second half effort was single digits, while Westbrook caught fire after a single digit first half. Harden spent most of the game in foul trouble, and as Giannis Antetokuonmpo and the Bucks got aggressive in the second half, the Greek Freak eventually fouled out, leaving the burden of winning the game on the shoulders of Khris Middleton (11 points), Ersan Ilyasova and Brook Lopez (11 points).

For anyone watching, the Bucks winning going away means it’s likely that Milwaukee wins the season series when these two play again in Milwaukee on March 25, 2020. By then, both these teams will be well entrenched in their respective conference races.

NEXT UP
Miami @ Milwaukee on Saturday

The Golden State Warriors got a little dose last night of what they’ve given to the rest of the league the last five years, and judging by the demeanor of the team hosting the game in their new digs last night, the taste is bittersweet at best. What felt like it should have been a good contest was nothing of the sort and L.A. beat the breaks off the home team.

For Golden State to have any shot at all at the playoffs in this highly competitive Western Conference, Stephen Curry is going to have to average about 40 points per night; he fell far short of that last night, hitting 23 on eight-of-20 shooting in the new Chase Center. Jacob Evans III was a team best 55.6 percent, but the Warriors fell worse than the final score indicates by shooting 39 percent as a team, while the Clippers hit for 62 percent on the road.

The Clippers led wire to wire – again, without the services of Paul George – including a 46-33 third quarter that put the game out of reach for Golden State and ruined their home opener in their new arena.

Aside from the Top Three, Ivica Zubac finished with 16 and 10 in 18 minutes, Montrezl Harrell was a beast with 18 and six on 88 percent shooting, and Landry Shamet added 11, Moe Harkless 10.

Kawhi Leonard looks unstoppable after two games, but the reason the Clippers were so sound was because of the play and demeanor of Patrick Beverley. The pesky guard had five steals to match his points output.

The NBA commercial is right, as George says it, “Showtime is in the 213.”

NEXT UP
Los Angeles @ Phoenix on Saturday