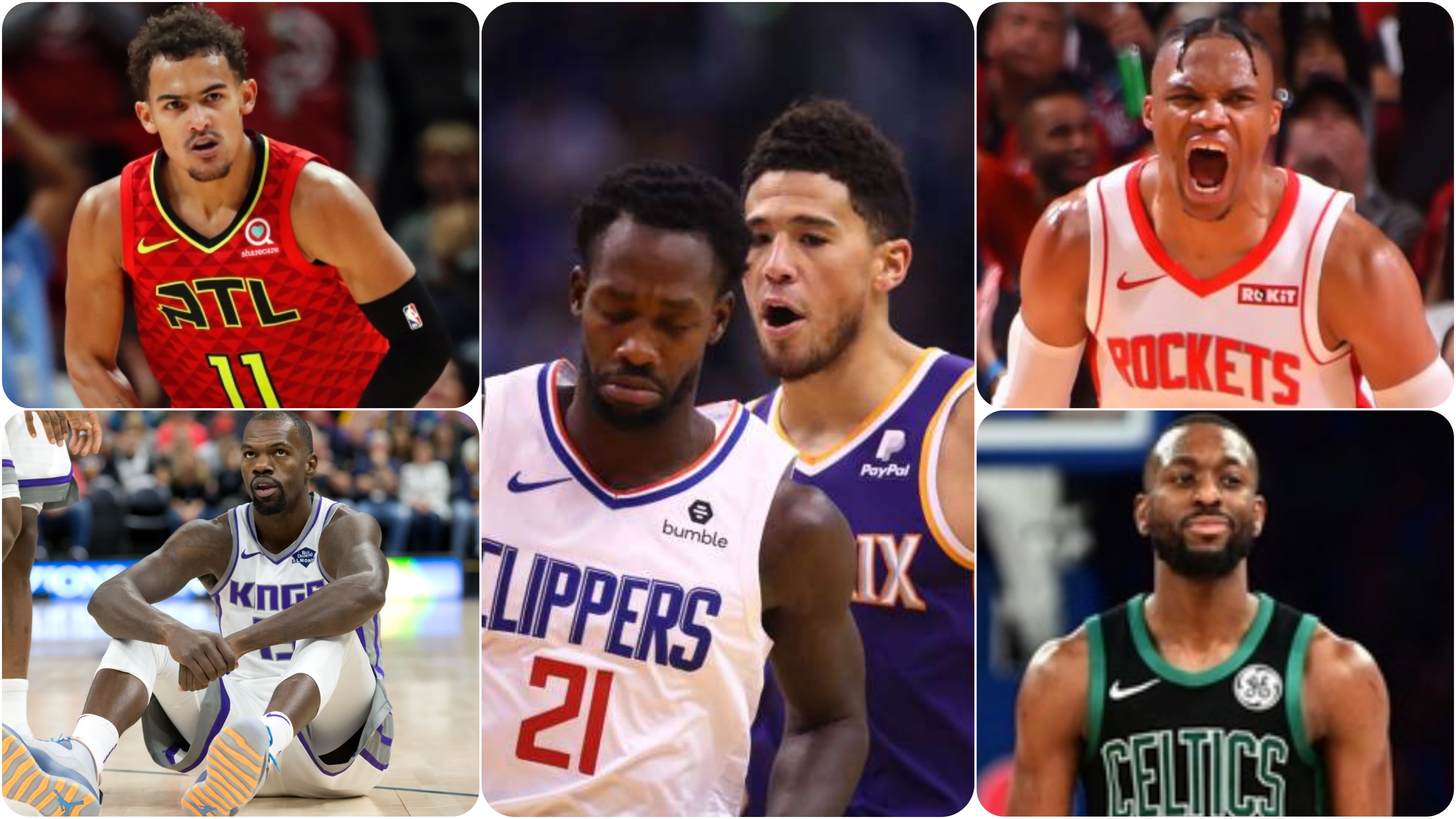 The Suns hand the Clippers their first loss, Kemba Walker comes into his own, and Trae Young lights up the Magic.

GAME OF THE NIGHT

One cannot take playoff experience and go into a visiting arena and count on that experience to carry you through against a young team, shoot 35 percent and expect to steal a win.

But that’s what the Orlando Magic did last night in Atlanta to no avail.

For the second straight game, Trae Young was on fire, shooting a blazing 64 percent from the field as the Atlanta Hawks shot to 2-0 with wins over the Magic at home last night and over the Pistons in Detroit on Opening Night.

Orlando attempted to make its living on the free throw line, where the Magic went 24-of-26, but they were beaten soundly in rebounds and assists, and of course, scoring.

Markelle Fultz continued his comeback, scoring 12 points and the entire Magic team made as many three-pointers as Young himself.

Cam Reddish and DeAndre Hunter dropped six points each in their home debut.

NEXT UP
Orlando @ Toronto on Monday

Milwaukee Gets an Early Heat Check

All things looked good, as the Milwaukee Bucks mounted their comeback and rallied in the second half against Houston in Houston the other night, looked like the old Bucks team mentality was back.

Guess they left that on the plane ride home somewhere.

Undrafted rookie Kendrick Nunn and the Miami Heat spoiled the Bucks’ home opener at FiServ Arena last night by sticking with the program the entire game, while the Bucks were like a deer in the headlights in the second half, before the teams headed to overtime.

Though Giannis Antetokuonmpo flirted with another triple double, he fell short and the Heat took advantage, including a 54-47 rebounding edge and shooting over 100 shots to end the night at 45 percent.

Bam Adebayo was fantastic for the Heat, dropping 19 points, 13 rebounds and dishing out eight dimes.

NEXT UP
Miami @ Minnesota today

With no Joel Embiid, it was finally time to see what the Philadelphia 76ers were made of, with all the offseason money thrown around and bringing in a free agent who is a center on paper, but not like Embiid in the arena.

Well, people are going to have to adjust to Al Horford’s game and not try and pigeonhole him into what we think a center should be like and play like, especially when you get results like this.

And as far as the $180 million that Tobias Harris and his father negotiated over the summer with the Sixers, money well spent. Ben Simmons also added 13 points and 10 assists for Philly.

For the Pistons, it meant their second loss of the young season already, despite Derrick Rose having a nice 31-point effort, without the services of Blake Griffin and Reggie Jackson.

But Rose can only do so much. The Pistons committed 23 turnovers, which led to 31 points for Philadelphia; if Detroit could have cut back on half of those turnovers, they might have had a fighting chance.

NEXT UP
Philadelphia @ Atlanta on Monday
Indiana @ Detroit on Monday

Kemba’s Coming Out Party on the Road

As the New York Knicks have struggled to find an identity the past, oh I don’t know, two decades, I’ve longed to see a guy like Kemba Walker come, play, and carry teams to victory at Madison Square Garden. I just didn’t expect it to be in a Celtics uniform.

I’d always the 32 point, five rebound, four assist night would be in a Knicks uniform, with Walker running the Knicks back into relevancy in the States’ biggest media markets.

But it was nice to see it for the Celtics, and for Walker, who had struggled in his previous two attempts to fit in with and lead this Boston team. He had help from the J’s, who for all intents and purposes are the identity and make-up of this Celtics team.

“I’ve been playing here since I was a kid in high school; it’s always good to come back,” said Walker. Brown and Tatum combined to add 34 to Walker’s efforts.

The actual face of the Knicks had a successful outing last night; R.J. Barrett hit for 26 points to lead New York; only three other Knicks scored in double figures, with New York’s Monster Mash trio of Julius Randle, Marcus Morris, and Mitchell Robinson combining for 39 points and 23 rebounds. Bobby Portis had 11 boards.

The Knicks were outscored 72-44 in the second half.

The Knicks have lost four straight at home to the Celtics.

It’s difficult to have any sympathy for the Bulls organization when they tease you with consistent play enough for you to begin to buy into the product they put on the floor.

The reality hits with a game like last night’s, where they’re too lazy to even phone it in.

Only Wendell Carter, Jr. and Zach LaVine showed up last night at the United Center, and barely at that. LaVine was a guy who, a year ago, was averaging about 27 a night. Workouts over the summer vlogged on the internet don’t translate into anything impressive if you don’t bring your A game night in and night out for this team.

That includes upper management and ownsership. Attitude reflect leadership and it’s been nothing short of a dumpster fire for Chicago the past few seasons.

Meanwhile, the reigning NBA Champions come to town and embarrass the Bulls by 24 in their own crib. It was Toronto’s 10th straight win over the Bulls.

Cavs Will Grab One if You Offer It

It’s taken a few seasons, but it appears Tristan Thompson is on a mission – even if it’s only to produce enough visibility to get him traded to a playoff contender.

Thompson has been a man possessed since the beginning of the season, determined to establish the Cavaliers in the post-LeBron James era, as a team that can win without the coattails of the superstar.

Kevin Love, on the other hand, would probably just like to get back to being the Kevin Love that was so dominant in Minnesota.

Both combined for a great game last night as the Cavaliers found a way to get into the win column in their home opener against a team that is supposed to dominate the NBA’s Central Division; instead they’re 0-2 and at the bottom of the Eastern Conference.

Still without Victor Oladipo, the Indiana Pacers are struggling to say the least. Not only to get a win, but to establish their identity with their star players on the sidelines. He’s been able to scrimmage, but has not yet been cleared for full contact basketball.

Mr. Triple Double is Back

It only took one game, but Russell Westbrook is right back where he belongs, ringing up triple doubles like you and I ring up breaths.

Westbrook nearly had one in the team’s first outing, the other night against Milwaukee, but it wasn’t to be; last night, a different tune.

You know the pairing of Westbrook and James Harden is going to be very harmonious if the result keep ending up like last night’s.

The pair overcame a nice effort by the former Lakers’ young core, who all came over in the Anthony Davis swap. Combined, the brotherhood of Brandon Ingram, Josh Hart and Lonzo Ball were responsible for 76 of New Orleans’ 123 points.

But it wasn’t enough to cover the efforts led by Harden and Westbrook and Houston gets its first win of the season. Meanwhile, the Pelicans remain winless.

Wizards with the Near Upset in San Antonio

It was DeRozan whose final shot of last night’s game sent the Wizards packing and sent the Spurs to 2-0. DeRozan split the defense of Rui Hachimura and Thomas Bryant with a shade over five seconds remaining to hit the winning bucket.

Davis Bertans, who was traded to the Washington Wizards, dropped five of five from downtown in his old gym, but it wasn’t enough for the Wizards to beat the Spurs. He was a perfect seven of seven from the field. Hachimura and Bradley Beal rounded out the top three in scoring for Washington.

LaMarcus Aldrige led the Spurs and Dejounte Murray put out a nice game, with Derrick White joining Aldridge and Murray as the only Spurs to shoot better than 50 percent from the field.

NEXT UP
Portland @ San Antonio on Monday

The Jazz needed a game like this. They needed to get Mike Conley on track and functional as a member of this offense. It was the last thing the Sacramento Kings needed – more of the same.

Bojan Bogdanovic returned to the Jazz lineup to lead the assault on the Kings, shooting 55.6 on his way to a game high 26 points, including five-of-five from downtown.

Conley came to life in Game Three, upping his shooting percentage to 45.5 percent and hitting for a dozen, along with eight assists. Georges Niang also chipped in another dozen and Emmanuel Mudiay added 10.

The Kings could barely muster an answer with only two players hitting for double figures … and totalling 21 points between them. Certainly not the effort the Kings were looking for after an 0-2 start.

NEXT UP
Sacramento @ Denver on Monday

Looking at the Los Angeles Clippers’ schedule, you’d have never pegged the Phoenix Suns as the team to take America’s favorite down. But that’s exactly what happened when the Suns jumped out to a decisive 36-30 third quarter to humble the Clippers in Phoenix last night.

The Suns shot 50 percent as a team in the win, led by Dario Saric’s 62.5 percent for 15 points and 10 rebounds, 60 percent from Mikal Bridges, and 50 from Devin Booker, who led all scorers with 30 on the night.

Montrezl Harrell was his typical beast self, keeping the Clippers in the game along with Kawhi Leonard and Lou Williams. Harrell shot 90 percent while JaMychal Green hit for 13 on 80 percent from the field.

But it wasn’t to be, even against a team missing its starting center due to a 25 game suspension. The way to beat L.A., apparently, is small ball, feeling like it used to feel in Phoenix.

NEXT UP
Charlotte @ Los Angeles on Monday