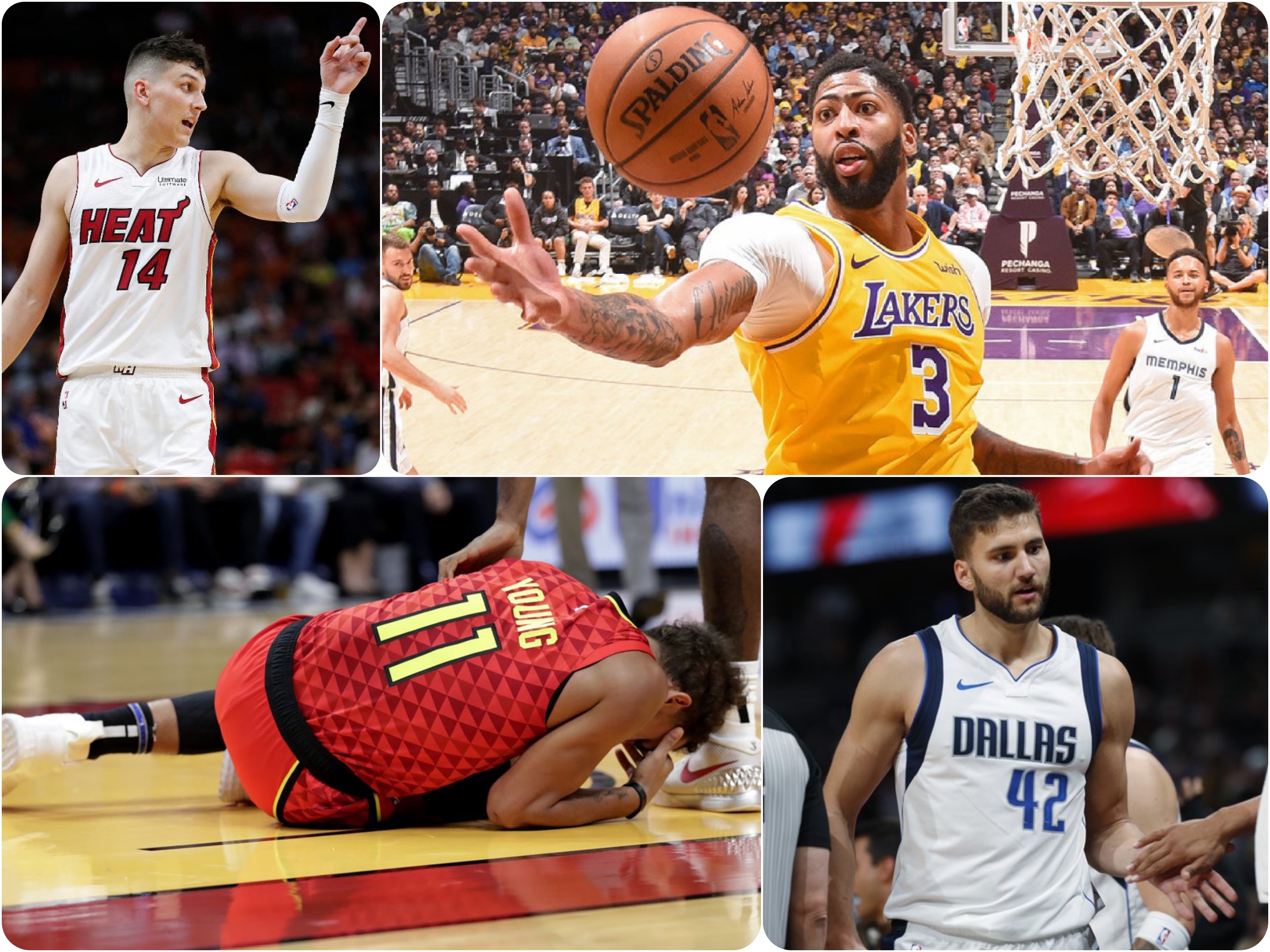 The Atlanta Hawks lost their hero while another Herro was made, all the other Dallas Mavericks stepped up, and the Lakers keep pace with the Clippers on Anthony Davis’ shoulders.

The Atlanta Hawks lost their hero while another Herro was made, all the other Dallas Mavericks stepped up, and the Lakers keep pace with the Clippers on Anthony Davis’ shoulders. Three games in the NBA last night …

The Atlanta Hawks lost Trae Young last night as he drove through the crowd and landed on Justise Winslow’s foot early in the second quarter, and severely rolled his ankle. The bad news is, the Hawks lost their leader, their momentum and ultimately the game. The good news is that the x-rays came back negative, but count Young out when these two teams meet again in Atlanta on Thursday.

That doesn’t mean it wasn’t a fun game to watch, unless you’re an Atlanta Hawks fan. Rookie Tyler Herro made his presence felt by leading all Heat scorers, including 19 points in the second quarter alone, shooting 77.8 percent from the field and 75 percent from downtown.

Yes, Jimmy Butler finally showed up in Miami, but was overshadowed by Herro’s heroics. Undrafted rookie Kendrick Nunn continues to make his presence known as well, dropping 17 in a starting role, albeit with 38.9 percent shooting. Maybe make Herro his travel roomie and shootaround partner and there’s your future, Miami. Unlike Butler, these guys will show up every night.

For Atlanta, although it’s another loss, they have a fairly light schedule to work on a plan for when Young goes down, God forbid he ever does again. (But it’s the NBA, it’s inevitable). Beyond John Collins they had/have nothing. Rookies DeAndre Hunter (4-3-2) and Cam Reddish (6-3-6) are bring rookie-like number to the table, and – like Reddish – Jabari Parker is nowhere near his Duke days.

Time heals all. Hope the Hawks medical staff can rebuild Trae Young. They have the technology.

It’s like the Dallas Mavericks are reading my column (they’re not). But, over the last week, I have asked repeatedly, “who’s going to stand up on this team besides Luka Doncic and Kristaps Porzingis?” Last night, the Mavericks answered me: EVERYONE!!!

Nine Dallas players scored in double digits to ease the pressure put upon Porzingis and Doncic, in a very balanced attack. Actually, so balanced that it’s easy to see why the Nuggets had a fourth quarter collapse – they were stampeded.

Paul Millsap finally showed up, but the biggest story lies in the stat lines – assists, specifically. The Nuggets only had 24 assists and lost the shot block battle 5-1, despite having one of the best centers in the league on their roster. Nikola Jokic had a nice, quiet triple double of 10, 10, and 10, but lost out in the paint to a cast of also-rans.

This Dallas team is making me want to do a road trip, if they keep playing like this.

The Next Great Lakers Center Is ….

I love seeing this type of game from Anthony Davis, who before the game was being checked for shoulder soreness and who hurt his thumb in pre-season. #FakeNews No shoulder soreness when you can shrug off the Memphis Grizzlies and go 40 and 20 on the night.

Davis gave Lakers fans a glimpse into the crystal ball of the next legendary Lakers center, built for the evolution of today’s NBA, not Shaquille O’Neal’s or Michael Jordan’s. This boy can do it all, including going 26-of-27 from the line last night – take that, @SHAQ!

Kentavious Caldwell-Pope finally decided to start earning that two year, $16 million extension last night, showing up to the party in Game Four. Avery Bradley (12 and three) and JaVale McGee (10 and nine) also showed, too, giving Davis and LeBron James some help in what hopes to be a grinding, fortuitous, and hopefully injury-free season.

That’s the only thing that can slow or stop James and Davis’ Lakers – injury. We have to remember that LeBron James has carried the brunt of responsibility and load for 15+ seasons now. Injury is inevitable, so the Lakers duo have to take this time to develop the rest of the team. The good ones went to New Orleans. The great one stayed back and I cannot wait until the return of Kyle Kuzma.