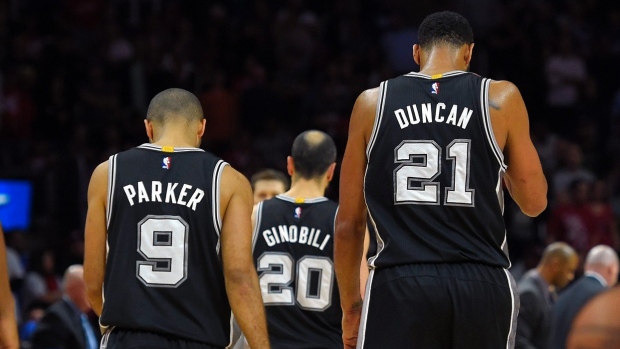 Throughout the San Antonio Spurs’ history, they’re known for being a team that’s all about the fundamentals, but also there were a couple of key players that helped add to their rich legacy. With 2,200 wins, 41 playoff appearances, and four championships in their 47-years, the Spurs are no strangers to victory. Ordered from the worst to best tenure, here are the top eight San Antonio Spurs players that have impacted the organization the most.

Throughout his career, Bruce Bowen was known throughout the league for his lockdown, aggressive defense that made him a sheer pest on that end of the floor. Thanks to his blitzing defense, it got him on the NBA All-Defensive Team for eight consecutive years. Opponents never caught a break from Bowen, he was constantly on the floor wreaking havoc. Bowen played around 80 games in the seven of eight seasons with the Spurs. Amidst the 2002-2003 season, Bowen led the league in three-point percentage with 44.1 percent. He made the second-most threes in franchise history, with 661 shots made from behind the arc. Three championships and a myriad of irritated opponents later, Bowen gets his jersey retired by the organization in 2012.

Alvin Robinson spent the first half of his career wearing silver and black wasting zero time whenever he was on the floor. Robertson was an extremely well-rounded player, able to create on both ends of the floor, averaging 16.2 points, 5.4 rebounds, 5.4 assists, and 2.9 steals per game during his time with the Spurs. He led the NBA in steals with 3.7 and 3.2 steals per game while adding 3.0 per contest during two other seasons. Robinson’s quick hands landed him a spot as the third-highest steal-getter in franchise history. Robinson made four NBA All-Defensive teams, one All-NBA team was selected for three All-Star games, and won Defensive Player Of The Year and Most Improved Player awards in 1985-86.

Someone who needs little introduction, David Robinson scored the second-most points in franchise history and once held the record for rebounds and most blocked shots. Not only was the 10-time All-Star a great scorer and he rounder, but he also had the fastest hands in the organization’s history. He holds the career mark for most steals with 1,388 steals during his 14-year career. Robinson rarely missed games throughout his career, but two injuries set the 7-footer back, preventing him from playing all but six games of the 1996-1997 season. David “The Admiral” Robinson won two championships, was the 1994-’95 league MVP, and appeared on eight NBA All-Defensive teams. Shortly after his last season, the San Antonio Spurs retired his jersey in 2003.

George “The Iceman” Gervin, is one of the best scoring two-guards in NBA history. He boasts career averages of 25.1 points through both the NBA and the ABA, Gervin showcased a silky smooth touch with his game that included, but are not limited to, the patented “finger roll” among the myriad of moves in his arsenal. With the Spurs, Gervin averaged 26.3 points (including the ABA) while shooting 50.8 percent from the field. The IceMan earned four scoring titles in the NBA, tied for third-most in NBA history, in addition to his 11-All Star appearances, he also has the fourth-best win shares with the San Antonio franchise retiring his jersey in 1987.

Sean Elliot had two trades split up his time with the Spurs, but he most certainly made the most of his tenure during his 11 years with the team. Elliot compiled the most third-most three-pointers made, eighth most-points, and 10th-most rebounds, in addition to playing the sixth-most minutes. Elliot averaged 15.5 points per game, 4.7 rebounds, and 2.8 assists for his career, made two All-Star teams and was a member of the Spurs’ 1999 championship squad. The Spurs retired Elliot’s jersey in 2005.

Manu Ginobili is undeniably one of the most beloved players to ever throw on a silver and black jersey. Spurs nation has loved the Argentinian shooting guard for most of his career since he came into the league as a mysterious 25-year old who led Argentina to a gold medal in 2004. Ginobili is the poster child for players who put aside personal accolades for the sake of winning. He wasted no time making an immediate impact on the Spurs. Establishing himself as one of the most dynamic two-guards in the league with his insane drives to the basket, introducing the “Euro-step” move, and marksmen-like shooting. Eventually, he became the franchise’s cornerstone. With that being said, he never pouted to coach Gregg Popovich, when he put him in a reserve role coming off the bench. In turn, he became one of the best “sixth men” in the league and won the Sixth Man Of The Year Award in 2007-2008. His new role didn’t stop him from making an impact especially during their championship runs as a key contributor. Although he only made the All-Star team twice it’s no debate that Manu Ginobili is a Hall Of Fame candidate.

Tony Parker is easily one of the best point guards to ever wear a Spurs Jersey. Despite only being 6-foot-2, Parker became one of the nastiest finishers in the league and a true offensive force throughout the NBA. Entering the NBA at 18-years old the raw young player often heard an earful from coach Gregg Popovich. Popovich was known throughout Parker’s early years for giving him some tough love throughout his career. It appeared to pay dividends, as the Frenchman became one of the most consistent floor generals in the league. Parker made the All-Star Team six times, made the All-NBA team four times, and averaged 15.5 points per game throughout his 17 seasons with the franchise. Overall, he won four championships with the Spurs along with winning finals MVP in 2007.

Tim Duncan, better known as “The Big Fundamental”, is easily one of the greatest bigs to sport a Spurs uniform. Widely considered as one of the best power forwards of all time, when the San Antonio Spurs drafted the kid from Wake Forest in 1997 their chances at a championship increased greatly. They became championship contenders nearly every year with Duncan on both ends of the floor. Duncan’s also known for being the most fundamentally sound player of all time. He had an all-around offensive game to compliment his extraordinarily high basketball IQ. Evidently, Duncan became Popovich’s anchor for his top-notch defense. Despite his reserved demeanor, the 15-time All-Star was a man amongst boys on the floor. The two-time league MVP was the driving force for all of their five NBA championships during their runs when he was a sophomore in the league and when he was a vet during their 2014 championship win. In the 19 seasons with San Antonio, The Big Fundamental averaged 19.0 points, 10.8 rebounds,3.0 assists, and 2.2 blocks. Out of his five titles, Duncan won finals MVP in three of them, making it the most in franchise history. He was recently inducted into the Naismith Basketball Hall Of Fame alongside Kevin Garnett and the late, great Kobe Bryant.

Jared Dudley is the Face of Bench Mobs, But He Now Has to do It in a Suit
The Philadelphia 76ers Just Missed Their Best Opportunity to Trade Ben Simmons