The Top Eight Houston Rockets of All Time 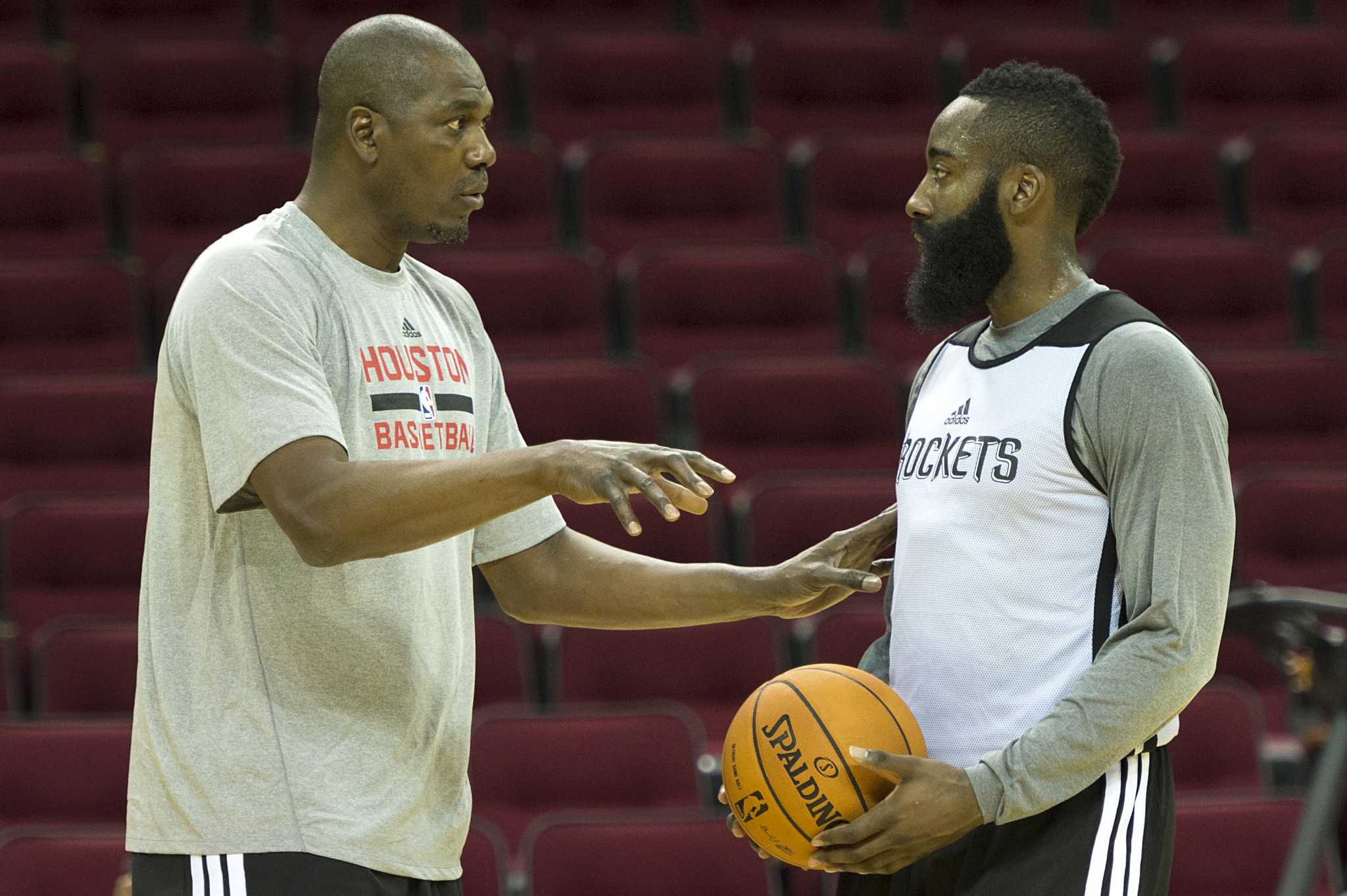 Ranking the top eight players for any team in any sport can be a daunting task, particularly when attempting to do it in order of greatness. In the case of the Houston Rockets, the top spot is obvious, but things get a little divey from there. Without further ado, let’s break it down, noting that only players who spent at least three seasons on the team qualify.

If you don’t know, you’d better ask somebody. The greatest defender of all time, as demonstrated by his secure spot atop the NBA’s all-time blocked shots record, Olajuwon redefined the role of the big man in the NBA. As agile and quick as any point guard but with the post moves to dominate any center or power forward, Dream will always go down as the greatest player to ever wear a Rockets uniform. Among his honors: 12 time All-Star, nine-time All-Defense and two-time Defensive Player of the Year, two-time NBA Finals MVP . . .and the list goes on. It would be impossible to quantify Olajuwon’s ongoing impact on the NBA.

The first player to ever lead the Rockets to the NBA Finals, Malone was as dominant an old-school low post player as there ever was. In his six seasons with the Rockets, Malone averaged 24 points and 15 rebounds per game while shooting better than 51% from the field. His 1981 Rockets made it all the way to the Finals before succumbing to one of the great Boston Celtics teams of all time – a team Olajuwon’s Rockets would also meet and lose to in the 1986 Finals. Two seasons after leading Houston to the Finals, three-time MVP Malone would win a championship with the Philadelphia 76ers. In an era largely dominated by paint play, Malone was among the very best.

It only seemed appropriate when the Houston Rockets, known for dominant big men, drafted Chinese phenom Yao Ming with the first overall pick in the 2002 NBA Draft. Like Olajuwon and Malone before him, Yao was a game-changer. Standing 7’5” but with the shooting touch of a guard and court vision of, well, Olajuwon, Yao could score and create offense in any number of ways. It took him some time to adjust to the NBA game, but once he figured out that it was OK to embarrass opponents he became as dominant a post player as there was in the league. The only thing that could slow down the eight-time All-Star and five-time All NBA First Team Yao was the dreaded injury bug. Due to his size and athleticism he simply couldn’t stay healthy. He even missed the entire 2009-2010 season, an injury which would prematurely end his career after just five games the following year. One of the great tragedies in Rockets history is that they never got to see Yao realize his full potential.

Clyde “The Glide” Drexler spent the majority of his Hall of Fame career as a member of the Portland Trail Blazers, but when the Houston native and former Houston Cougar returned home to pair with best friend and college teammate Hakeem Olajuwon it was one of the greatest moments in Houston sports history. With Olajuwon injured, Drexler led the Rockets to a playoff berth by averaging 21.4 points, 7.7 rebounds and 4.4 assists over the final 35 games of the 1994-95 season. The “Phi-Slamma-Jamma” duo of Olajuwon and Drexler then led the Rockets to their second title. Among his other accolades, Drexler was a 10-time NBA All-Star, five-time All-NBA  and second only to Michael Jordan among the top shooting guards of their era. He led the Blazers to two NBA Finals appearances before finally winning his lone title with Houston.

The only person who comes as close to being as beloved as Olajuwon in the hearts of Rockets fans is “Rudy T.” Younger fans may recall him as the head coach who took Houston to two championships and coined the now iconic phrase “never underestimate the heart of a champion” following his team’s repeat championship in 1995. Older fans may recall that before he joined Houston’s coaching staff Tomjanovic was a member of the Rockets team which played in San Diego before moving to Houston in his second season. One of his more remarkable achievements as a player was bouncing back from being punched by LA Lakers forward Kermit Washington. The facial blow was potentially life-threatening, yet Rudy T returned the following season to average 19.0 points, 7.7 rebounds and shoot better than 51% from the field. The five-time All-Star was a consistent 20-10 threat for the Rockets and was recently inducted into the Basketball Hall of Fame as a coach. His number 45 hangs in the rafters of Toyota Center alongside Olajuwon’s, Malone’s, Drexler’s and our next two finalists.

San Antonio Spurs guard Manu Ginobili may have brought the Euro-step to the NBA, but it was James Harden who turned it into one of the most lethal offensive weapons in all of basketball. When the Oklahoma City Thunder refused to offer Harden, their sixth man, a maximum contract extension, Houston jumped at the chance to land him via trade. As Houston’s starting shooting guard he led the NBA in scoring three times, won an MVP award and even led the league in assists once. His lack of attention to the defensive end of the court played a role in costing Houston a title shot during his tenure and his unceremonious exit left a nasty taste in the mouths of Rockets fans, but for a period of time Harden was one hell of a player to watch. Like J.R. Ewing in Dallas, Harden is now the man Rockets fans love to hate, though team owner Tilman Fertitta says he will retire Harden’s #13.

Another player who dates back to the San Diego Rockets is one of the best point guards to ever wear a Rockets uniform. A prolific scorer as well as a dynamic playmaker and defender, Murphy was part of the first Rockets team to ever make it to the NBA Finals (alongside Malone). His 17,949 career points stood as a Rockets record until Olajuwon eventually surpassed him as the franchise’s top scorer of all time. Murphy also made a name for himself at the free throw line, where he set a record with 78 consecutive free throws made (now stands as third-best ever) and also set an NBA record when he shot 96% for the 1980-81 season (now second behind Jose Calderon’s 98%). He was inducted into the Hall of Fame in 1993.

With a tip of the hat to other great Rockets like Elvin Hayes and Tracy McGrady, Robert Horry absolutely deserved to make it onto this list, just as he deserves to be in the Hall of Fame. There are a few players in NBA history whose statistical averages don’t tell the whole story, and Horry is hands-down the all-time leader in this category. His reputation for hitting big shots started with his first team, and his heroics in Houston’s two championship runs make him the stuff of legends in Rockets history. One such shot was the one that beat the San Antonio Spurs in Game One of the Western Conference Finals in 1995. Olajuwon drew the triple-team, dished to an open Horry, who took one dribble and calmly drained the winning bucket. Days later, then in the NBA Finals against the Orlando Magic, Horry drained a three that gave Houston a win in Game Three. He was a tremendous defender, did all of the dirty work that elite players do, and established himself as perhaps the most clutch player of all time. He is one of only nine players to have won seven NBA championships and the only one who didn’t play for the 11-time NBA championship Boston Celtics of the Bill Russell era.

Have a different take? Leave it in the Comments section below!

Bill Ingram is Senior NBA Editor for BackSportsPage.com and has covered the NBA for more than 25 years.

Socios.com and the Orlando Magic Join Forces to Innovate Fan Experiences
How Markelle Fultz Will Fit Alongside a Crowded Orlando Magic Backcourt