The Top Prospects In College Football 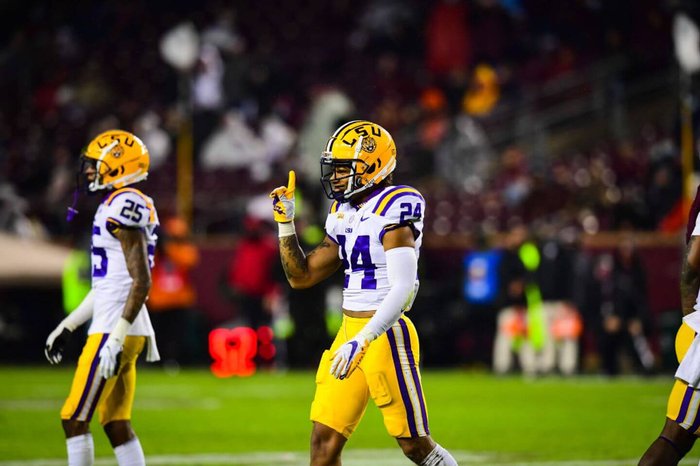 Football is back, and so is draft talk! I know college football and the NFL just got underway a week ago, but we’re only 224 days away from the 2022 NFL Draft. The 2021 NFL draft class made quite an impact during the opening weekend of the NFL. Number one overall pick Trevor Lawrence got beat up, but still managed to throw the ball 51 times on Sunday. Ja’Marr Chase hooked up with his old teammate, Joe Burrow, for a touchdown and 101 receiving yards. Trey Lance and Justin Fields saw some of the field in Week 1, whereas in New England, Mac Jones got his first NFL start. However, it’s time to look forward to next year’s draft. It’s early in the college football season, but here are Back Sports Pages’ top ranked NFL Prospects.

Non-QB’s are never locks to be the number one overall pick, but Thibodeaux is without a doubt the best player in this draft class. He has the perfect edge rusher build at 6’5” 258 lbs. His first step is second to none. My favorite part of his game is the fact that he’s excellent against the run as well. Sometimes these top edge rushers come out as pass-rushing specialists, but they aren’t great at stopping the run. Thibodeaux will hear his name very early in the 2022 NFL Draft, assuming he declares.

The LSU corner is by no means a perfect prospect. He had one of the best seasons we’ve seen by a true freshman cornerback in 2019. In 2020, it was a different story. He was not bad by any means, but was not the dominant lock down guy we were used to seeing in 2019. He has all the traits you want in an NFL corner, and I expect him to return to form in 2021 to solidify his draft value as one of the top prospects in the entire draft.

Neal has bounced from one spot to the next each of his seasons at Alabama. He played and started every game as a true freshman in 2019 at left guard. Then, he moved to right tackle and started every game there in 2020. Neal entered the 2021 season as the starting left tackle. The big man has been dominant at every spot. He is a mammoth of a human being, and is absolutely a top five prospect in this draft class. He fits in any blocking scheme. I can see him rising ahead of Stingley by the end of 2021.

Hamilton is a freak-athlete at his size. Standing 6’4” and 220 lbs, he is loose with his hips and has good speed. He is extremely versatile. You can line him up in the slot, play him in the box, drop him as a single high safety, or split zone safety. He should remain a top five prospect throughout the 2021 season and continue to standout on the Notre Dame defense.

Rattler is a really fun watch. His ability to make throws off-platform and on the move is impressive. He can make every throw you want him to. He has really good athleticism. We aren’t looking at a Kyler Murray or Jalen Hurts type athlete quite, but still a very athletic QB that can make every throw and extend plays when they collapse. My favorite part of Rattler’s game is his eyes. He really knows how to move a defender off the spot he wants to throw to. Rattler is an impressive prospect and should be the top QB in the class.

Leal is a player that can move all across the defensive line. At 6’4” and 290 lbs, he can truly win on the edge or inside at will. He definitely has the strength you want in a guy playing inside on your defensive front. He’s dominant against the run with patience, allowing rushers to come to him before he throws his blocker off and makes a play. His pass-rush has some work to do, but his strength alone helps him collapse the pocket and create pressure on opposing QB’s.

The Georgia Bulldogs offense is have already missed Pickens a whole lot this season. He is absolutely my number one receiver in this class. I wish we were going to see him this year, but I don’t think it is very likely. He has everything you would want in a number one receiver. The Bulldog wide receiver stands 6’3” and 200 lbs. Pickens is an excellent receiver at the catch point. He wins pretty much every 50-50 ball thrown to him. He has a really clean route tree. He’s a great athlete with long-speed and short-area quickness. I think he is going to be a late-riser once he is fully healthy and can do workouts in the pre-draft process. He’ll climb boards and be in the conversation as the number one receiver and a top ten selection.

Hutchinson has a ton of short-area quickness and strength. He stands 6’5” and 270 lbs. Hutchingson is the ideal size of a defensive end on the edge. He doesn’t have a ton of experience in college ball, but he has a ton of upside. He’s a great athlete for his size as well. He gets off the ball extremely quick, and creates tremendous problems for offenses to deal with. I think he will make a statement with his play in 2021 as he already has begun to do early on.

The Clemson Tigers cornerback has waited his turn to start on the outside and I expect him to solidify his value as a top player in this class. He’s a physical corner that has elite coverage skills. I expect him to have a dominant year for Clemson. It’s been a solid start already with a very good game against Georgia in the opener.

Olave has been a problem for defenses this season. He’s a very good athlete, runs terrific routes, and has solid size at 6’1” and 188 lbs. It’s likely he is the best receiver in this draft, especially with George Pickens out for the year. Olave will be at the top of mock drafts throughout the season.