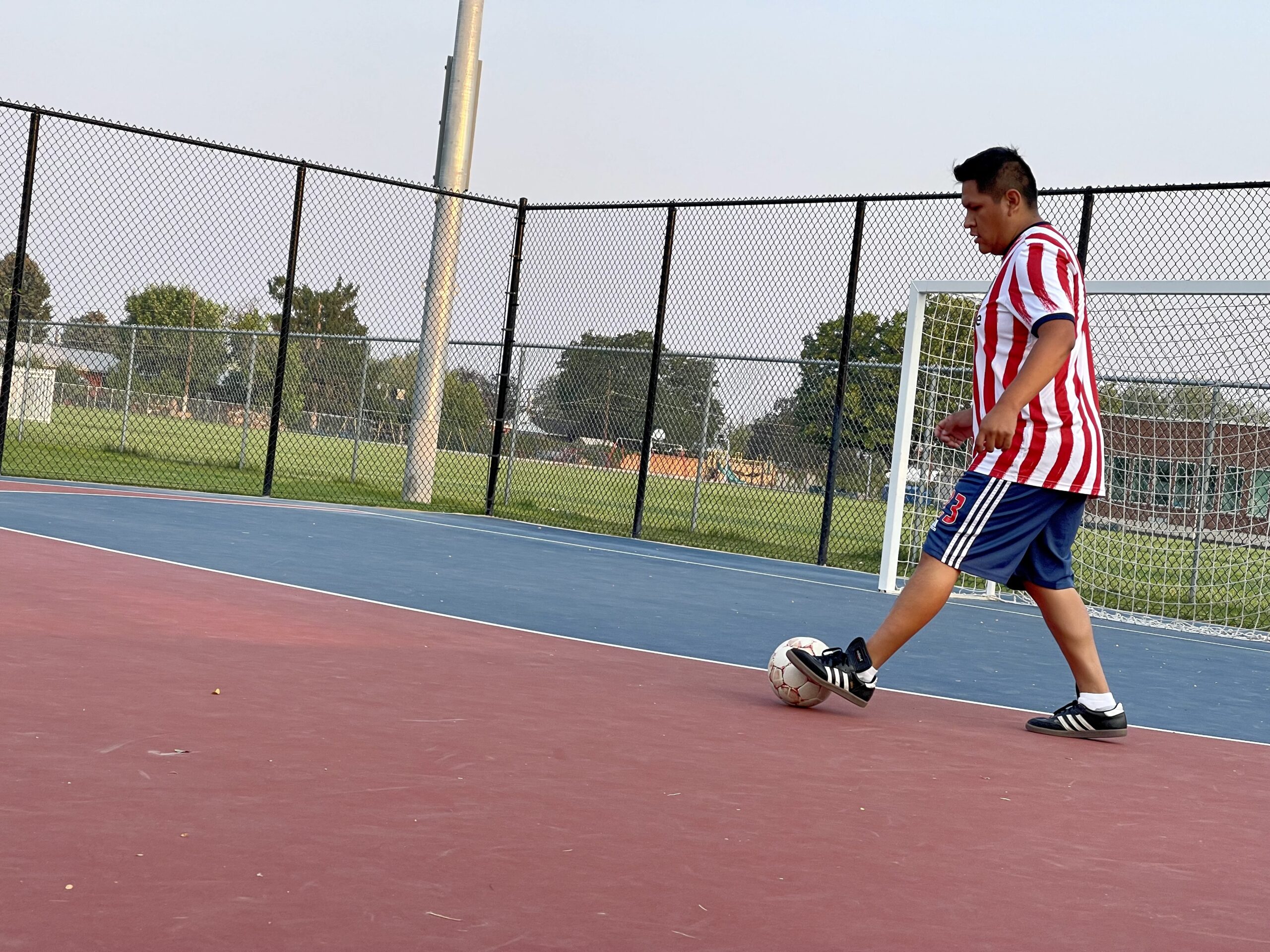 On any given morning in Orem, Utah, under the shadow of the Wasatch Mountains, a dozen or so men play futsal. This tradition began fifteen years ago, and six days a week since—every single morning—players show up.

Helaman Pesqueira, the organizer of this underground Utah futsal experiment, knows that the players might be different each day, coming and going with the years, but the spirit of the competition remains the same. The consistency, he found over the past decade and a half, has been in the game itself.

For some regular players, though, like Amoran Taylor, the early morning pick-up games are the closest thing to a formal league they’ve ever had.

“I never played for a team,” Taylor said. “I just played on the streets.”

And with this league, it seems, the streets have come to Orem.

Unlike formal soccer, played on a vast expanse of manicured lawn, there remains something distinctly street-like about the fast-paced, high-scoring hardcourt version of the game, known as futsal. Even when  university students, professional project managers, financial experts, and business owners are the ones battling out the match, there remains a wildness about it, too

The teams form as the sun rises, naturally and without comment. Each game is played to five points, win by two. In colder months, the men play inside on a gym floor. In August, though, they meet at Geneva Park. The futsal area, provided to the city by the MLS team Real Salt Lake, sits empty so early on a Saturday morning. It’s a sticky court, the players warn each other, stickier than the gym floor they’re used to. Then it begins, and any comments made become clipped, quick.

Their feet moved as fast as their words. Brightly colored shoes flashed and danced across the red and blue court, kicking above and around the ball too quickly for eyes alone to follow. Some of the players, Pesquiera especially, maintained an astonishing amount of control over the tiniest movements. His boot at the ball stopped time, or at least any expectation that comes with it. The precision of movement as the ball was flicked forward or passed back was perfect. In fact, the game that took place on August 28 was formed almost completely of short bursts of perfection—perfection that comes in glimpses and comes in futsal. 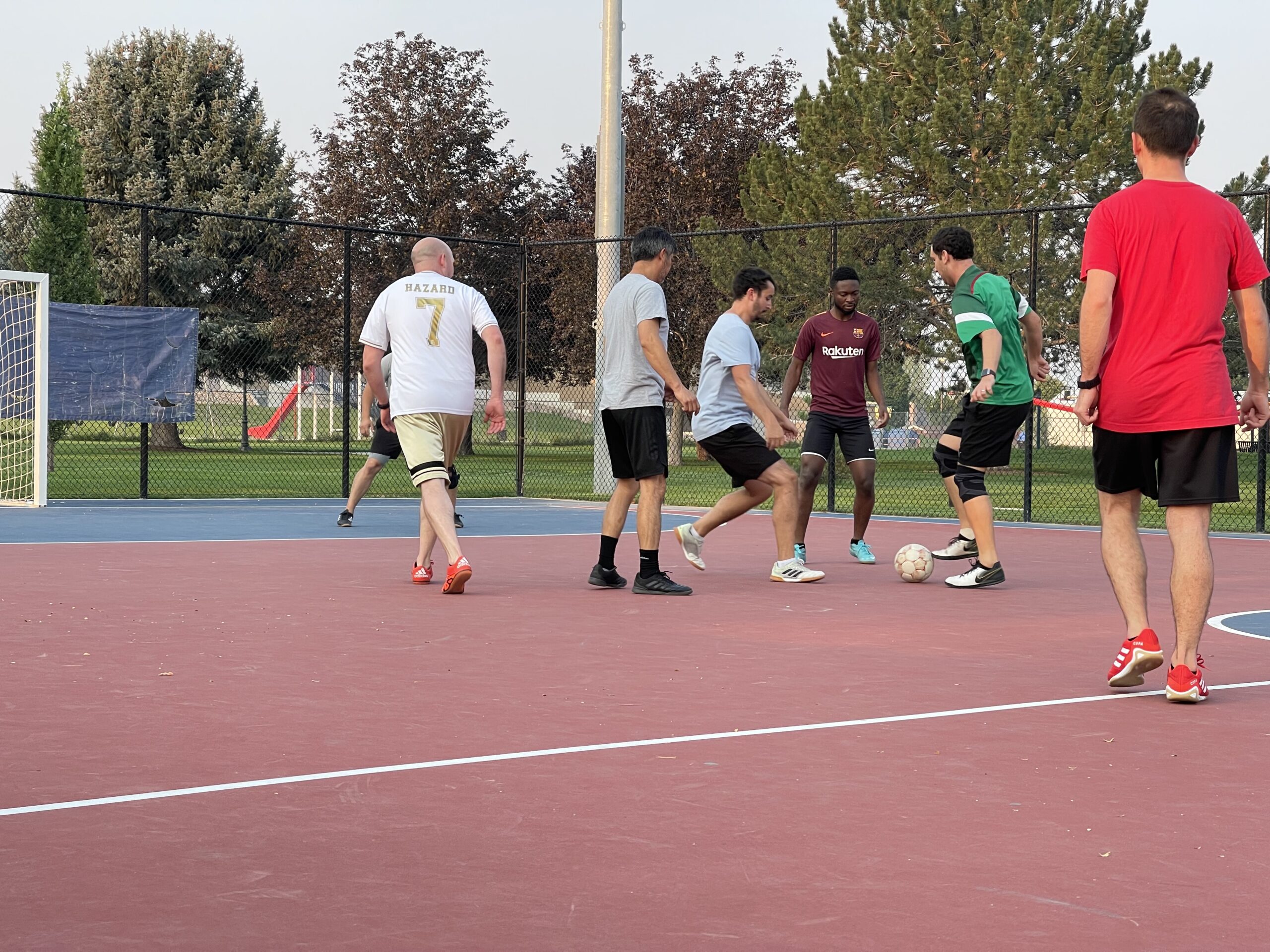 The competition heats up

After three quarters of an hour, the competition and the court heat up. The men shed their jackets, and for some, their hustle flagged. This version of the beautiful game is not really a young man’s arena, not with this crowd, but what it lacks in youth it seems to find in dogged continuation. Pesquiera’s father, in his 60s, still plays. He crosses with impossible accuracy, and he sips from the water bottle he holds in his hand as he runs around the court.

“Note to self,” Pesquiera said after watching his father pickup an assist, “that’s how you pass the ball.”

But age is not the only type of diversity the underground futsal league features.

Utah is 86.43% white, according to the 2010 US Census. But on any given morning in Orem, nearly every continent gets represented. In fact, on August 28, shouts or murmurs of four languages could be heard on the court. Brazilians, Mexicans, French, and Congolese gathered to play an international sport in a western American state. A beautiful game, indeed.

Jaaron Eller, one of the long time players, explained that the team works, in part, because of one, unwritten, unbreakable rule. The cultural and generational diversity makes the team stronger. But the mutual respect keeps them together.

“Have you noticed the lack of screaming or yelling?” Eller asked, smiling. “If someone messes up, there’s laughing instead of screaming. If there’s any frustration, it stays internal.”

And it does—remarkably so, especially for such a typically emotional sport. New players join up because they want competition, but they stay because they find camaraderie. That attitude, the pure love of the game, resonates from the court. It attracts.

After somewhere near a dozen games to five, it’s 8 am. Sweat soaks through the greys and reds of the t-shirts and old jerseys worn by the players. More people start showing up at the park, ready to support their kids’ teams on the field nearby.

In fact, one man, who lingered outside the fence to watch, explained that he was there to see his daughter play soccer on the next field over. Then he asked, as he laced up his tennis shoes, if he could jump in and even out the teams for a game or two. He should be over there watching her, he explained, as the players welcomed him onto the court. But he has time for a quick match first.

Half a dozen more games passed. No one was keeping track of how many which team won. A few men, including the soccer dad, drifted away to their rest of their days. Eventually, the remaining players decided the next goal would win. 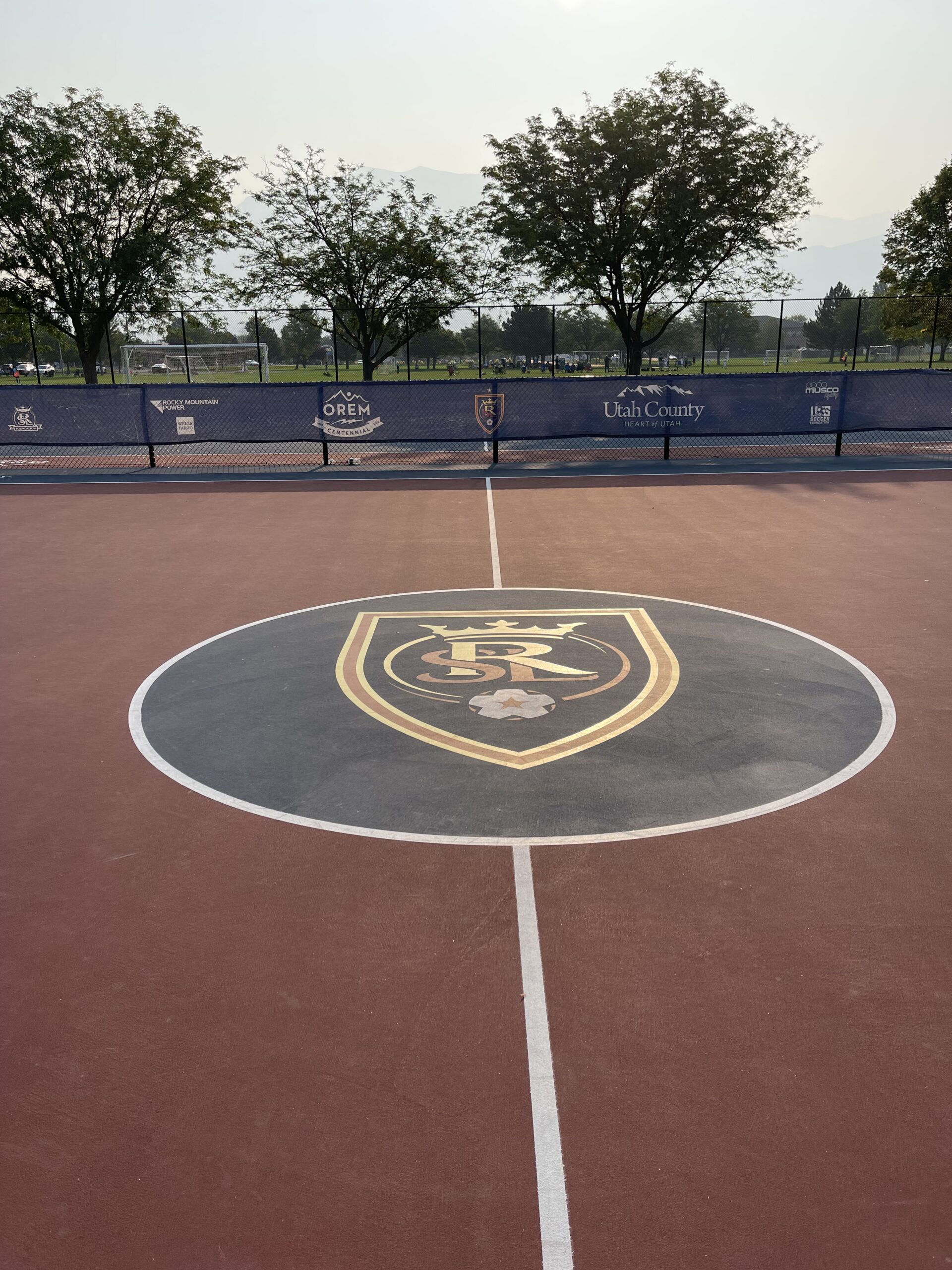 The whole sport of futsal is an exhaustive effort—far more shots missed than scored, and then, even if a team won, another game just started up again. After someone scored the next goal, everyone agreed to wait for another goal. And another. Finally, the next “last goal” was declared the golden goal, and all the men established it would mark the true end. Or at least, the true end for that day.

Because the game might be an exhaustive effort with an unknown result. But everybody won at least some of the time. And everybody would be back to play again tomorrow.