The Yankees Should Have Won the 2019 ALCS 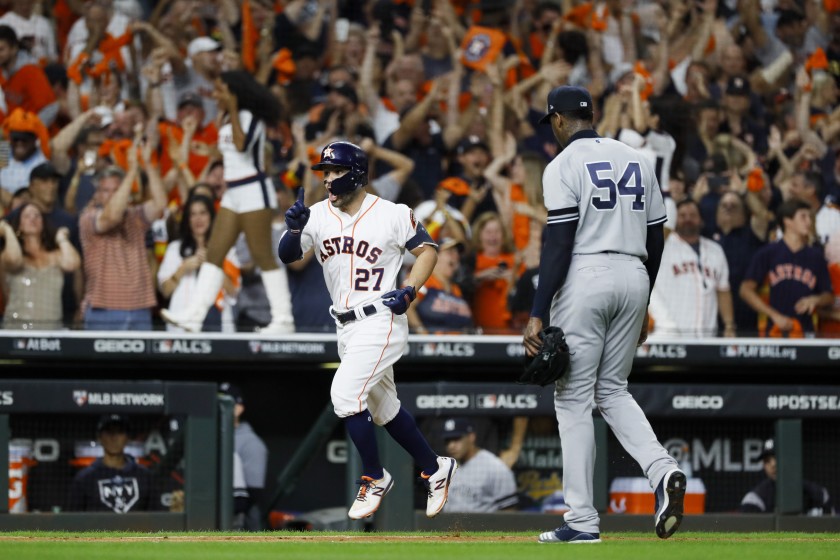 The Yankees tried their best to make their first World Series since 2009, but ultimately lost to the Astros in six games. It is the first time since the 1910s that the Yankees have not appeared in a World Series within a decade. Many fans and analysts alike blame the Yankees for their starting pitching woes, poor outings from the bullpen, and not being able to cash in with runners in scoring position as reasons why they lost the ALCS.

Relievers such as Adam Ottavino pitched terribly in the ALCS (11.57 ERA in five games and a blown save), and two of the Astros walk-offs came off starter-turned reliever J.A. Happ in Game 2, as well as closer Aroldis Chapman in the clinching Game 6.

Despite having a league best .294 batting average with runners in scoring position (RISP) thanks to players such as DJ LeMahieu and Gio Urshela, the Yankees had just a .200 average in the ALCS. It didn’t help that Carlos Correa threw out DJ LeMahieu at home, who would have been the go-ahead run in Game 2. In Game 3, Gerrit Cole walked five batters, and the Yankees ended up 0-6 with RISP. Besides, in Game 4 the Yankees had the bases loaded twice, but only managed to get a run on a bases-loaded walk.

Similar to the hitting chart, the Astros were superior in every pitching category. However, in the ALCS the Astros only had a better K/9 than the Yankees. Besides the K/9 category, the Yankees outperformed the Astros in every other category as evident by the % diff.

Even though the Yankees were statistically stronger than the Astros throughout the ALCS, they still failed to capture their 28th ring. One of the main reasons the Astros won the ALCS was because the Astros made the most of their opportunities, such as Correa’s Game 2 walk off, Jose Altuve’s Game 6 walk off, and Gerrit Cole still pitching seven strong innings despite not having his sharpest outing in Game 3. Another explanation, not listed on the charts, can be explained by the Astros taking advantage of the opportunities that arose with runners in scoring position. Despite hitting .109, the Astros still managed to hit three home runs. Two of these homers were go-ahead homers from George Springer’s three-run jack in Game 4, and Yuli Gurriel’s three-run bomb in Game 6. Capitalizing on openings such as these led the Astros to their second pennant in the last three years.

After the surprising loss of the series, many fans and analysts believe that the Yankees should be active in the offseason. Yes, some activity is warranted; for example, if they can afford Gerrit Cole, he should be worth the investment. In addition, if they can retain free agents Didi Gregorious, Dellin Betances, and Brett Gardner, they can bring back a productive core. Such expenditures would be useful, but it should not be forgotten that the Yankees were a 103- win team, while having a MLB record 30 players on the Injured List. Because key hitters such as Miguel Andujar, Luke Voit, Gary Sánchez, Aaron Judge, and Giancarlo Stanton missed extended periods of time during the regular season, but should be healthy for 2020, the Yankees’ offense can be expected to be stronger. On the pitching side, Masahiro Tanaka, J.A. Happ, and James Paxton were all effective in September. Furthermore, the Yankees missed nearly a full season of Luis Severino, and on a lesser note, Jordan Montgomery, both of whom should return to the rotation. Meanwhile, pitchers such as Domingo Germán, Jonathan Loaisiga, and even top-pitching prospect Delvi Garcia can all see time in starting roles. As a result, the Yankees don’t necessarily have to make many major changes this offseason; with their current roster, they should be just as strong or even better than in 2019.

ALCS: American League Championship Series. A best-of-seven series where the winner gets to play in the World Series.

RS Y/A: The Yankees and Astros regular season performance in a specific category.

ALCS Y/A: The Yankees and Astros ALCS performance in a specific category.

RISP: Runners in Scoring Position. The batting average when there are runners on second or third base. MLB average in 2019: .261 BA.

OBP: On base percentage. Hits+walks+hit by pitches divided by plate appearances. MLB average in 2019: .322 OBP

Bold Move by Cubs: David Ross to be Named Manager
What if the Yankees trade Giancarlo Stanton?