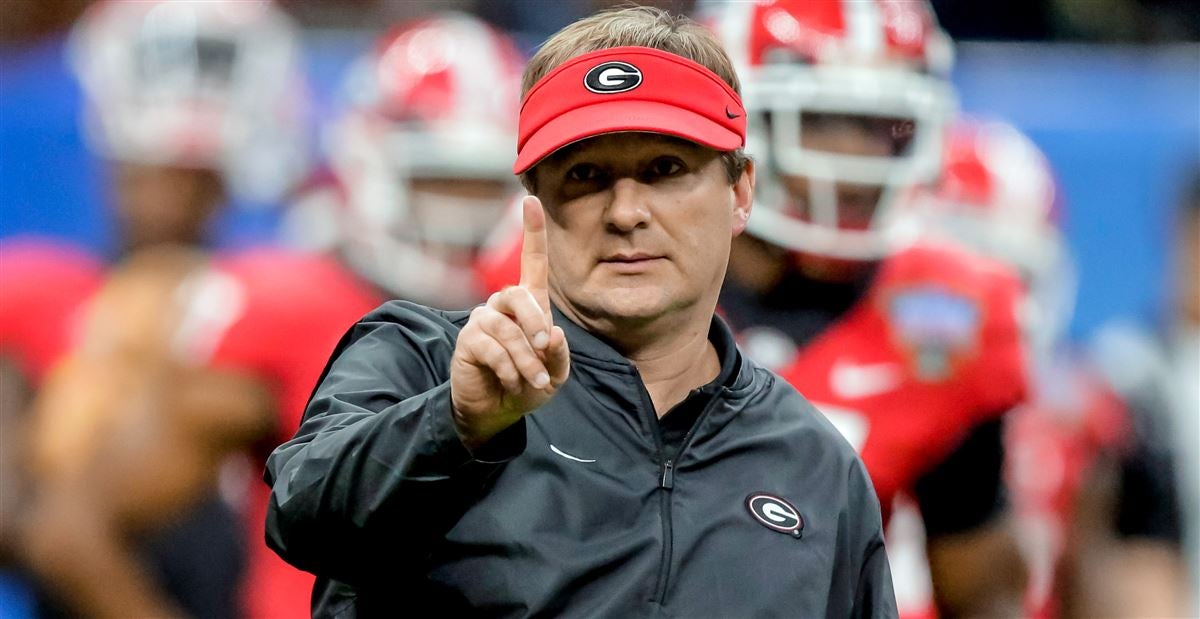 You can catch up on what you missed, or get a quick refresher on all four parts of this series posted as of now:

Well, today is the day we are going to wrap up my five part series. Over the past few days we’ve covered Nick Saban’s coaching tree, the first impressions Kirby Smart made on the Georgia faithful, the quick rise of Georgia football, and finally it’s free-fall back into the mediocrity of college football. Coming off a disappointing 2018 campaign which ended in back to back losses, Georgia’s off-season would be a crucial one.

Justin Fields, the number one ranked player by ESPN in the class of 2018, was done sitting on the bench. For the entire 2018 season he was attached to the end of the bench, just sitting and watching Jake Fromm make mistakes that he would not have made even if he was in high school. On December 18, 2018, Justin Fields officially entered the transfer portal of college football. On top of that, he was looking to be granted immediate eligibility because of an altercation he was involved in on the Georgia campus.

When Fields first announced his intent to transfer, Georgia fans and critics weren’t exactly surprised. Jake Fromm struggled at times in 2018, but overall he completed 70% of his passes and threw only five interceptions to 27 touchdowns on the year. He had all but locked himself into the starting role for the 2019 season, and the 2020 season, if he had decided to stay at Georgia for his senior season.

This is where we get to see if Kirby Smart was capable of being an elite coach. Sure Jake Fromm had a great freshman season, and a pretty good 2018 season as well. However, if Justin Fields were in the same position, would he have done better? Could he have been the missing piece Georgia was looking for to finally break through into the college football elite. On these types of matters, I like to refer to none other than Nick Saban on decision making like this. Had Nick Saban been the coach at Georgia would he have played Justin Fields, even though Fromm had established himself as the starter? I honestly believe Saban would have played Fields about half-way through the season. He did the same thing with Jalen Hurts and Tua Tagovailoa, except in that scenario, the national championship was on the line.

The Fall to Mediocrity

When Fields entered the transfer portal, Georgia players, coaches, and fans all simply moved on and were content with a one-dimensional Jake Fromm at quarterback. To each his own, I guess. The good news is that the Bulldogs came out of the 2019 season gates with a little bit of pep in their step. The Dogs reeled off five straight wins to start the season. Fromm was great early, completing almost 80 percent of his passes for eight touchdowns and no interceptions. At the moment, it looked like Georgia didn’t miss Justin Fields at all.

In the fifth game of the season, the Bulldogs hosted one of their rivals, the University of South Carolina. South Carolina was on another down year, and Will Muschamp’s seat was getting hotter by the day. When the Bulldogs showed up in Columbia, they expected to grab an easy win, and start to look forward to their match-up with sixth ranked Florida in two weeks. However, the Bulldogs should not have overlooked the Gamecocks.

On Saturday October 12, 2019, the Bulldogs were beaten at home by the Gamecocks of South Carolina. Georgia kicker, the reliable Rodrigo Blankenship, missed a 42-yard field goal in the second overtime to give the Gamecocks the 20-17 win over number three Georgia.

Fromm was well below average in the game against the Gamecocks. He was 28-51 passing, for 295 yards, one touchdown, and three interceptions. It was around this time people really started to question Kirby Smart’s philosophy of sticking with Fromm over the more talented freshman. All three of Fromm’s interceptions were bad throws, or they were lofted in the air out of desperation. The loss to South Carolina, would go down as the day Georgia began its final descent into college football mediocrity.

The Bulldogs reeled off six straight wins after the loss to the Gamecocks. However, they ran into the giant that was the 2019-2020 LSU Tigers in the SEC Championship game. LSU easily breezed by the Bulldogs 37-10, on their way to winning the 2020 College Football Playoff National Championship. Georgia would go on to accept a bid to play in the Sugar Bowl versus number eight ranked Baylor. The Bulldogs took care of business 26-14, and in what would be his final game as a Georgia Bulldog, Jake Fromm was average. Completing 66% of his passes for 250 yards and two touchdowns.

On January 8th, 2020, Jake Fromm officially declared for the NFL Draft. Funny enough, his announcement came a little over a week after watching Justin Fields and Ohio State lose a heart-breaker in the College Football Playoff Semi-Finals to Clemson.

For you to really understand my point of view here, we need to go back to look at Jake Fromm’s stats from the last eight games of his career. During that time the Bulldogs beat (6) Florida, Kentucky, Missouri, (13) Auburn, Texas A&M, Georgia Tech, (1) LSU, (8) Baylor. In those eight games combined Jake Fromm completed 120 of 223 passes for 1,489 yards, 15 touchdowns, and two interceptions. His touchdown to interception ratio is still off the charts, but he was only completing about 50% of his passes for only 186 yards per game. In their loss to South Carolina, the Gamecocks came in with a game plan to force Jake Fromm to beat them through the air, and he could not.

All in all, Jake Fromm really did preserve Smart’s job at Georgia, but after having two five star quarterbacks leave your university all because a four star quarterback had eight good games when he was a freshman, but he may also have doomed it.

Heading into the 2020 season, the Bulldogs were incredibly lucky to pick up JT Daniels, the former five star quarterback out of California, after he transferred from USC. In the weeks leading up to the season, it was clear that Daniels would not be ready to go for the season opener, as he was still recovering from a knee injury he suffered in USC’s first game last year. With Fields off the board, Smart had his choice of Stetson Bennett, the former walk-on, and D’Wan Mathis, the little known three star recruit, to start at quarterback.

Just like Smart, he found a way around naming a starter, and said both players would play in the season opener versus Arkansas. The Bulldogs cruised to a 37-10 victory. Bennett had a decent game, throwing for 211 yards and two touchdowns, Mathis on the other hand, struggled mightily, completing less than 50% of his passes for only 55 yards. He also threw Georgia’s only interception.

After the Arkansas win, it seemed to be the time that JT Daniels would finally make his first start at Georgia. Kirby Smart came out and said to the media that JT was healthy and a go for their match-up with (7) Auburn. However, that was not the case for Smart, as he trotted out Bennett to start again. Bennett was 17-28 throwing for 240 yards and one touchdown. However, the main catalysts in Georgia’s big win were the Bulldog defense and the running attack.

Georgia ended up getting pummeled by Alabama two weeks later, 41-24. Bennett was again under center. This time, he was not very good at all. He was 18-40 for 269 yards, two touchdowns, and three interceptions. JT Daniels would not see the field until the seventh game of the year versus Mississippi State. Daniels was a major upgrade at quarterback, going 28-38 for 401 yards and four touchdowns. Daniels would go on to start the rest of the season for the Dogs. He was 80-119 for 1,231 yards, with ten touchdowns to only two interceptions. The question must be asked, why didn’t Smart start Daniels earlier if he was healthy from week two?

I’m not here to make people angry, or to try and get into an argument, I am just simply stating the fact that Kirby Smart is not an elite college football coach. What other college football coach had two five-star quarterbacks leave their school for other universities because you had such loyalty to a guy who up until his junior year, hadn’t proved much at all? Georgia recruits, and acts like an SEC powerhouse, but in fact they are not. Nick Saban knew when to make a change at quarterback to give his team the best chance to win, so why wasn’t Smart capable of this. I will just end my series by leaving it open to the reader. Do you think Kirby Smart is an elite coach? If not, who would be some names to replace him. If the Georgia jump opened up, every coach in America, employed of unemployed, would be vying to take it over.

I appreciate you following me on this story for the entire week. I had a lot of fun writing this series, and I will continue to look deeper into the Georgia football program, because I think there may be another reason JT Daneils didn’t play at Georgia until week eight this year. Finally, I leave you with one stat: since 2017, Smart has recruited 23 five-star players out of high school, the most by any school, yet Georgia has won only one SEC Championship.

Brady Vs. Mahomes: A Battle Of Style
Matthew Stafford: A New Era in Los Angeles