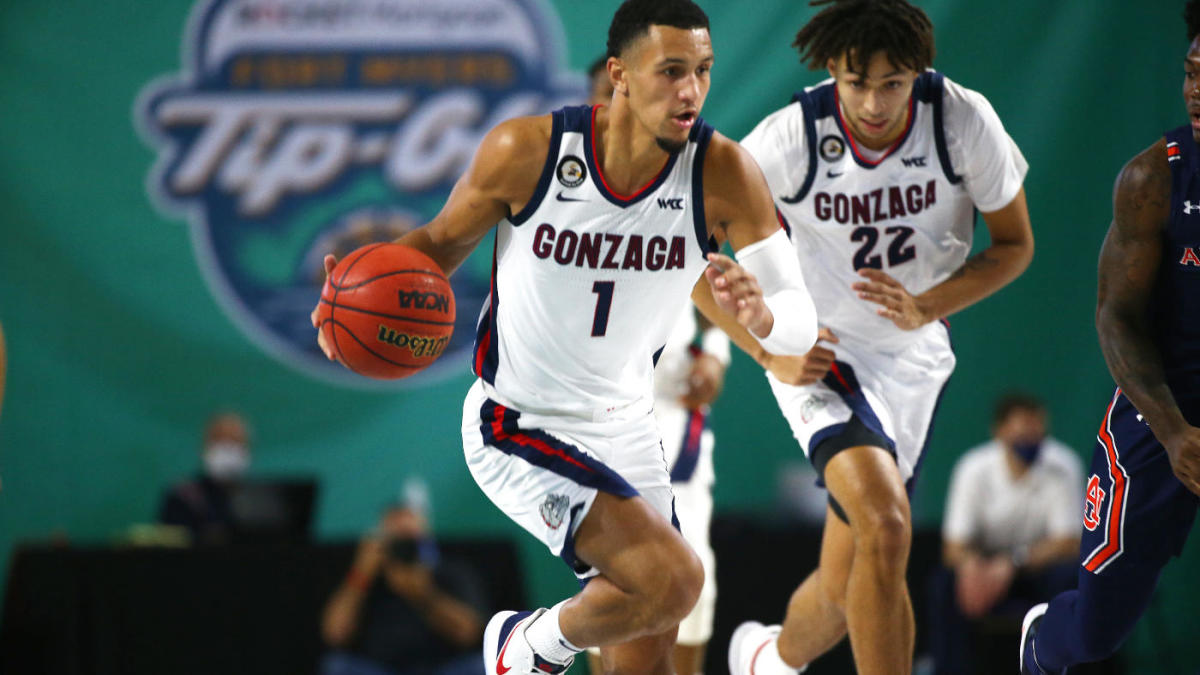 UPDATE: This game has been postponed because Gonzaga had one student athlete, and one non student athlete test positive for the virus. Both teams will look to re-schedule. I will keep you updated!

It is a beautiful day where I am currently at right now. There’s about six inches of snow on the ground, slowly melting, and the slate of college football games is an exciting one. You have (4) Ohio State at Michigan State, (1) Alabama at LSU, you even have (13) BYU at (18) Coastal Carolina, which might be the sneakiest best game of the day. However, around 1 PM Eastern time, I will be getting ready to cover some Cavs media availability, and watching the first half tick down in the Ohio State game. I will turn my gaze onto college basketball and the mammoth match-up in Indianapolis today (1) Gonzaga vs (2) Baylor.

Both of these teams are deep and incredibly balanced. On top of that both teams have passed early season tests versus good opponents. (1) Gonzaga has already defeated (6) Kansas this year 102-90 in the Fort Myers Tip Off. On top of that Mark Few’s Zags also took care of a scrappy, defensive-minded (11) West Virginia team 87-82, in the first game of the Jimmy V Classic. As for (2) Baylor, they have already beaten the fifth-ranked Illinois Fighting Illini, in the night cap of the Jimmy V Classic. The final score was 82-69. Now they both head into today’s game, looking to add another big win to their resumes. Here are the three match-ups you should be on the lookout for during this early-season big game.

Both teams average about 90 points per game. However, Gonzaga gives up 80 points per game to their opponents, while Baylor holds teams under 68 points this year to date. Baylor’s defense revolves around their perimeter defenders, and off the ball defenders. The Zags have five players on their roster that average double-figures. They include freshman point guard Jalen Suggs (13.3), junior guard Andrew Nembhard (11.7), guard Joel Ayayi (13.7), senior forward Corey Kispert (22.3), and sophomore big-man Drew Timme (23.3). The Zags are fully capable of out-scoring anyone in the NCAA.

However, if anyone has the perimeter defenders to beat the Bulldogs, it’s Baylor. They are led by junior point guard Jared Butler, who averages 16 PPG, and almost three steals. Sophomore big Jonathan Tchamwa Tchatchoua, will have the task of defending Drew Timme of the Bulldogs, but if anyone is up for the task, it’s Jonathan. He hauls in 8 rebounds per game and also has a block per game. Junior guard Davion Mitchell, who also handles the rock for Baylor, is averaging almost seven assists per game and almost three steals per game. He should be able to lock down Ayayi or Suggs. Baylor runs pretty much a 4 out 1 in concept, with four guys on the perimeter and one big to flash in the lane. Baylor starts Mitchell at the point, Butler at the two, MaCio Teague at the three, Mark Vital at the four, and Flo Thamba at center. That means that Baylor will bring Tchamwa Tchatchoua off the bench along with Adam Flagler.

In the end, this category is pretty even, because of Baylor’s perimeter defense, but the edge goes to Baylor as they are older and more experienced and have a deeper bench full of athletes that can guard. Edge: Baylor Because of Perimeter D, and Depth

This is the match-up everyone is dying to see. The freshman scoring phenom from Minnesota, Jalen Suggs, versus the defensive-minded, terrific on and off-ball defender junior guard, Jared Butler. Butler has had a tremendous career at Baylor under coach Scott Drew. He has averaged just over fourteen points per game in his career. However, on the defensive side of the ball is where he gets things done. He is averaging close to three (2.7) steals per game this year, and just under two in his three year career. Butler is also a threat when pulling up behind the arc, as he shoots 44&% from behind the three-point line. Drew has turned Butler into a pretty damn good facilitator on the offensive side of the ball. Butler is averaging four assists per game this year, up from 2,7 and 3.1 his freshman and junior seasons.

Now we move on to Jalen Suggs, the highest recruit Mark Few has ever brought into Spokane. Suggs stands at 6’4 and 205 lbs, which is quite frail for a bigger point guard such as himself. However, Suggs is living up to the hype around him. Mark Few has handed the keys to his offense over to Suggs, who is shining in that role. Suggs, the freshman, from Minnehaha Academy in Minnesota, is averaging just over thirteen points per game, 4.7 rebounds per game, and over six assists per game for the Zags. When it comes to being a true point guard, Mark Few has found his man. Suggs is a threat from deep, but doesn’t shoot them often, only when he’s wide open will he put up a long range jumper. Possibly the most incredible stat for the freshman, is that he has only five turnovers on the year. That’s a little over one per game. So if he is averaging just over 1 turnover per game, that makes his assist-turnover ratio about 6-1, which is very good for anybody, let alone a freshman for the nation’s number one team.

All in all this should be an exciting match-up. Both players have pretty much been given the keys to the offense by their head coaches. Both players can play at any pace, even though if you asked them, I bet both would say they like the game being played quickly, as it suits their strengths. However, in the end the edge goes to Baylor, by a nose. Butler is just more experienced and his on-ball pressure can match anyone in the country. EDGE: Baylor and Guard Jared Butler

Both of these coaches like the game played in a certain way. Few and the Zags like to leave the game wide open and fast paced, so they can get all their capable scorers enough shots to go around. Few has been the best coach on the west-coast for quite a while. It’s a surprise that Suggs was the highest rated recruit Gonzaga has ever had (Suggs was the #6 overall recruit in the ESPN100 2020 Rankings). Few has also had his fair share of big games he has played in in March/April. Few has spent his entire career up out west in Spokane. From 1989-1990 he was a Graduate Assistant, he then became an assistant coach for ten years from 1990-1999, and finally he has been the head coach of the Zags 21 years, since 1999. His Zags have won the West Coast Conference Tournament 16 times, and won the regular season WCC title 19 times. He was the AP Coach of the Year in 2017, and has been the WCC Coach of the Year 13 times. However, the big knock on Few is that he can’t seem to win the big one. Few’s Bulldogs have only made the final four once, in 2017, where they lost to North Carolina in the National Championship 71-65. Could this be the year the Zags break through, and finally bring a title back to Spokane? They are good enough and well coached enough, but today’s game versus Baylor will be a real test for the young Bulldogs.

Scott Drew, head coach of the Baylor Bears, started his career as a student manager at Butler. From then he was an assistant at Valparaiso from 1993-2002, and in 2002 he took over the head coaching responsibilities at Valparaiso. He was only head guy at Valpo for one year before Baylor hired him away in 2003, and he has been the coach at Baylor since then. Drew hasn’t racked up all the awards and trophies that Few has, but he did win Big-12 Coach of the Year in 2020. He also won the NIT for Baylor in 2013. Even though Drew isn’t as decorated as Few, he seems to finally have found his guys, in last years and this years Baylor team. He preaches defense, and is definitely a defensive-minded coach. With guys like Teague, Butler, and Mitchell at the guard positions, on-ball pressure is a must in Drew’s defensive scheme. They won’t always have the biggest guys, but they will always have pesky guards that annoy you.

In the end the edge here has to go to Mark Few. His longevity and familiarity of the Gonzaga basketball program is second to none. However, Drew is no slouch himself, he’s put the best defensive basketball team in the country on the floor the last two years. This is the type of game where the players should determine the outcome, but don’t fall asleep on the coaching genius on Gonzaga’s sideline. Edge: Mark Few, Head Coach Gonzaga

Well there you have it the three keys to today’s huge game. That game has now been… Postponed. I was just finishing the article when I saw the news. One student athlete and one non-student athlete from the Gonzaga traveling crew, tested positive for the virus this morning. Both teams will look to reschedule the game, but it won’t be a top priority. It’s such a bummer, because this was going to be a great game. Well at least you now know something about arguably the two best teams this year in college basketball. I will update this post if a reschedule date is found. But anyways, that’s your college basketball news for the day.