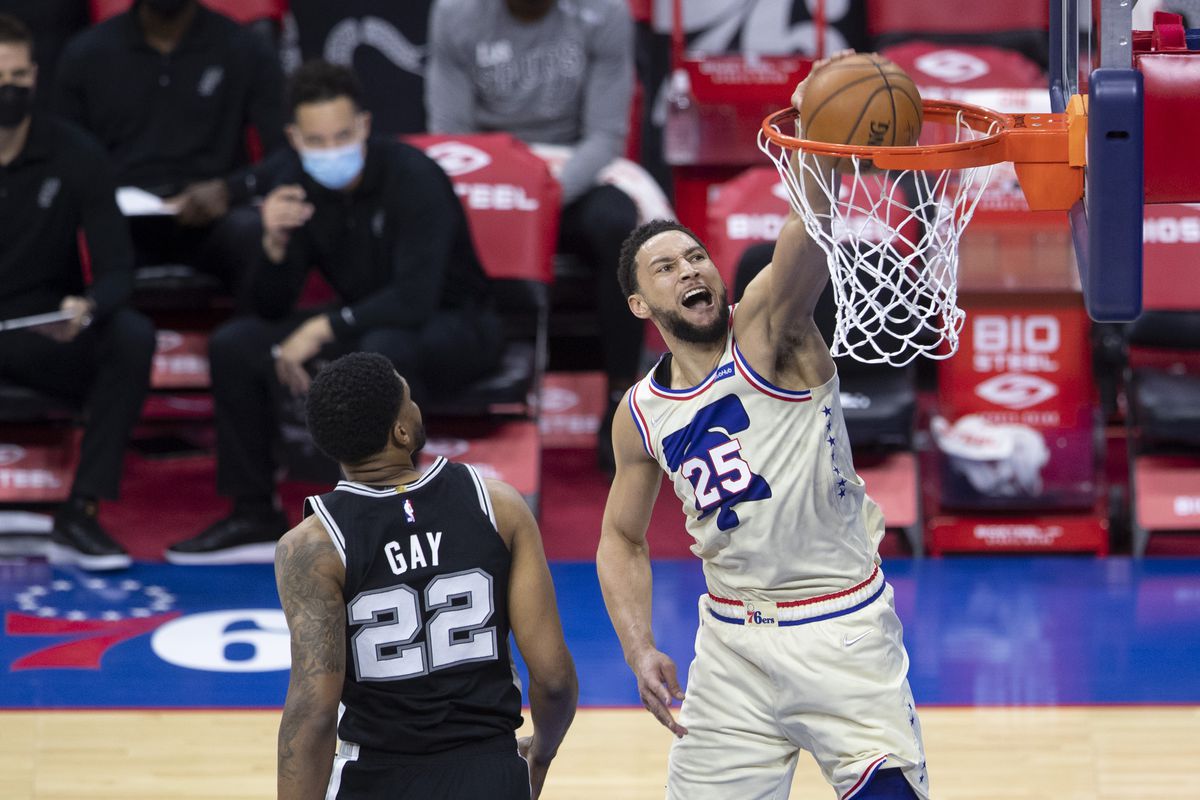 I previously did this article for the 76er’s losing streak, so it feels right to do it for this win streak as well! The 76ers are playing some really great basketball right now. After the All-Star break, the Sixers have won four straight (six total, tied best in the league), and now have the second best record in the entire NBA. They are only trailing the Utah Jazz, who they beat right before the break anyways.

All of this without their two main stars, Joel Embiid and Ben Simmons, both playing at the same time. Not only that, three of the wins were blow out victories by over 20 points. Check out their ratings from their first three games. They’ve been doing fantastic on both ends of the floor, and not only are the starters playing well, the bench has come alive. That brings up the first observation.

1. The Bench is Playing Great

Honestly this article could basically be the reverse of the last one. The struggles of the bench and how Daryl Morey needs to bring in reinforcements don’t need repeating. While that sentiment still may be true, the bench is certainly proving themselves right now. A lot of factors go into bench scoring, so raw numbers aren’t the end all be all, but the 76er’s second unit has outscored their opponents 200-151. They’ve won each game’s matchup as well, so it’s not just one game carrying the load. The starters are doing what they do in building leads. This time however, the bench isn’t just keeping the lead (or losing it), but expanding on it. That’s a total 180 from the reserves during the losing streak.

Dwight Howard has been a man possessed, averaging a double-double off the bench. He’s turned back the clock, skying for dunks, putbacks and vicious blocks. Furkan Korkmaz has also been playing great. While he’s still the most dangerous from three by far, he’s shown a bit more to his game every now and then, flashing some handles and a mid-range jumper. He’s the least shy to shoot on the whole team, and has the quickest release, meaning his percentages can dip when he’s forced to take the last shot. Even still, he’s averaging 15.5 points per game over this stretch on 45% from deep. The 76ers don’t necessarily need the other stuff Korkmaz can occasionally do, but that three-point threat is critical.

Finally, the last main member of the bench, Shake Milton has been more up and down. Though his game looks a bit shaky (heh) at times right now, the fact is the bench plays better with him out there. These last two games he’s been uncharacteristically shy, but he’s still the one running the point and making plays for others, averaging 3.5 assists during the winning streak. His shooting has struggled for sure, especially from long-range. He also seems to lack confidence at the moment, but nothing suggests he can’t get it back.

2. Matisse Thybulle Will Be a Starter Soon

It probably won’t be this year, as Danny Green (sans yesterday) has also been playing quite well. But Matisse Thybulle has been playing his tail off during the streak, including in two starts. His defense has been excellent as always, limiting Bradley Beal and Zach Lavine to under 20 points (when they average 30). That doesn’t compare to the absolute stocks (steals+blocks) he’s amassed. During this win streak Thybulle has averaged three steals and 1.25 blocks. Diamond hands indeed.

The most important thing he’s shown however is an improved offensive game. He went into the double digits for the first time this season against the Chicago Bulls, and did it again two games later against the San Antonio Spurs. Last night’s game against the New York Knicks was a bit of a step back, but he’s still 6/8 from the three-point line. Tiny sample size of course, but if he can shoot league average from deep and play Defensive Player of the Year type defense, it would be a waste for Thybulle to not play 30+ minutes a game.

Tobias Harris may not have made the All-Star game, but that only seems to have made him angrier. Since his snub, Harris has been better than ever, even without Simmons or Embiid. He seamlessly took the role of primary scoring option in Embiid’s absence, something many never thought he could do. This man looks completely different from the player that struggled so immensely against the Boston Celtics last year. This Tobias Harris is a beast. He’s creating opportunities for himself, driving aggressively or posting up and taking it up strong. He’s even showing the ability to make the really tough shots, with quite a few turn around fades to his name recently. He abused defense multiple times, barreling to the rim early and often on his way to 30 crucial points against the Knicks.

Harris is also doing it when he needs to. Again, Embiid and Simmons have not played together during this win streak. Harris has stepped up, scoring 22.8 points a game on wild 55/55/93 splits. This is the same guy that shot 38/13/79 against the Celtics in last year’s playoffs. While he hasn’t had many opportunities to score in the clutch during the win streak (due to three huge blowouts) the one time he has had too he did. Harris was the one that broke the 92-92 deadlock with two minutes left to go last night. He did it all by himself, bursting past Reggie Bullock to lay the ball in, and then backing Bullock down before hitting a sweet fade away to put it away.

The last time we saw Harris in the clutch? Just five games ago against the number one Utah Jazz, where he dominated in overtime. Harris has turned some sort of corner this year, and the Sixers have a true super team of three bonafide stars right now. This Harris can go get a bucket at will. That’s the most important thing to have in the playoffs. The way he’s playing right now he deserves to be in the same breath as Simmons and Embiid.

While he wasn’t specifically included in this list, special attention should also be made to Seth Curry. He scored 20+ point in back-to-back outings. He also looks more aggressive, especially from deep. He’s letting it go even when not wide open and he’s also pulling up from way beyond the line. Curry and Harris have been carrying the offensive load without Embiid, and they are doing an amazing job.

When Embiid went down against the Washington Wizards the city of Philadelphia held their breath. Luckily, the injury wasn’t a season-ender. Unluckily, the games that Embiid must miss might just take him out of the MVP race. In a bittersweet way the 76ers pulling this win streak off without him also isn’t helping his case. It’s a far cry from earlier in the year where the 76ers were almost helpless when Embiid didn’t suit up.

This new look 76ers sans-Embiid will face their true test tonight. They face down the Milwaukee Bucks, who are on a four game win streak of their own. The Bucks, Sixers and Brooklyn Nets seemed destined for the top three seeds in the East, which makes the number one seed that much more crucial. Winning games against the Wizards or Bulls without Embiid is one thing. Defeating the Bucks will be a whole other ordeal. If they can pull it off though, with Harris and the bench continuing to play the way they have…that’s a true championship favorite.