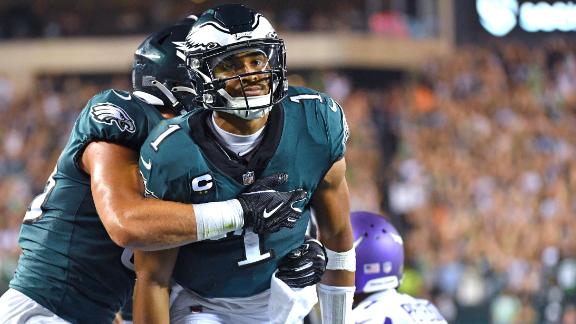 The Philadelphia Eagles sent a message to the rest of the NFL on Monday Night Football. In all three phases of the game, the Eagles showed up and dominated. Philadelphia fanatics should love that the hype over the offseason is for real and not a gimmick. The Eagles are one of six teams still undefeated going into week three. Here are three takeaways from Philadelphia’s home opener:

As I’ve stated all offseason, this team will go as far as Jalen Hurts can get them. And it seems like Hurts has made serious growth to be able to make the Eagles Super Bowl contenders. Hurts went 26/31 for 333 yards and one touchdown in the air. On the ground, he had 11 carries for 57 yards and two touchdowns. Hurts was also able to connect with eight different receivers throughout the game. He is dominating in all aspects of the game and has led the Eagles to back-to-back wins.

If Hurts can keep tearing defenses apart, his name will be in that MVP conversation. The biggest question out of Philadelphia this offseason was, “Can Hurts do enough to lead this team to victory week in and week out?” And it seems that two weeks into the season that question is yes. Keeping up his talented performances will only get more difficult as teams begin to scheme against his strengths. But Hurts is certainly making his case for MVP early.

Slay was already one of the best cornerbacks in the league since his Detroit Lions days, but Slay is performing extremely well to start the 2022 season. While covering one of the best receivers in Justin Jefferson, Slay held him to zero catches on six targets while covering him. He added three pass breakups and two interceptions to that too. Just one week ago Jefferson had nine catches for 184 yards and two touchdowns against the Green Bay Packers. The Vikings have a high-powered offense and the Eagles only allowed seven points and forced three interceptions. This is a great game after giving up 35 points to the Lions last week.

Performing this well on primetime Monday Night Football has gotten more and more people talking about how Slay is again a top-five cornerback in the NFL. He also has the fifth lowest passing rating allowed with 25.2. This team is going to make a deep playoff run if Slay and the defense can keep this kind of performance up throughout the season.

The Eagles Are Serious

As I’ve stated, the offseason hype is certainly getting backed up by the Eagles. Winning in that fashion in primetime is surely a way to impress the NFL. With all the offseason additions from A.J. Brown to James Bradberry to Haason Reddick, all have contributed so far. As the season progresses the team will only gain chemistry and get better. That is something that the rest of the NFC East will not be happy about. Although the rest of the division has played well too, with the New York Giants also sitting at 2-0.

The Eagles will have to continue to play well with the season being a long one. This team has all the talent to make 2022 a memorable season, they have shown that all three phases are talented. Shutting down the Vikings this week truly showed that the Eagles are serious. This Sunday they will play their first division game against the Washington Commanders at FedEx Field.