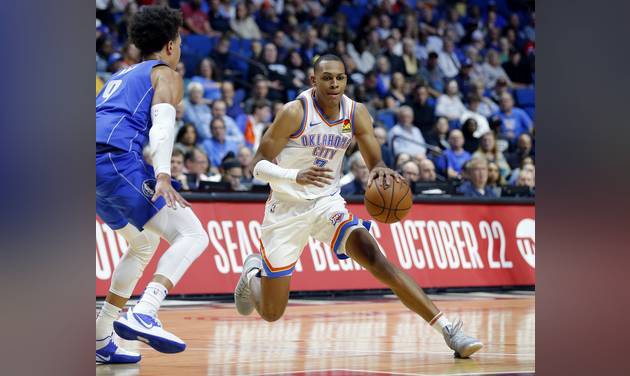 Shai Gilgeous-Alexander had a nice pre-season debut for the Oklahoma City Thunder on Tuesday night in Tulsa.

C’mon, admit it … just like I did, you thought the no-name Oklahoma City Thunder were going to come out flatter than the anvil top clouds that get sheared and peter out across the Oklahoma prairies, didn’t you?

With Chris Paul as the only marquee name in the forefront of your mind, we all thought – okay, this is CP3’s chance to mentor some young men and improve his tradability with that gargantuan four year, $160 million deal he inked last July in Houston.

Stop lying to yourself. I thought it, too.

Even more so with the Dallas Mavericks coming to Oklahoma. After all, they have last year’s Rookie of the Year Luka Doncic and the Latvian beast, Kristaps Porzingis, on the roster.

On paper, the boys in blue, orange and white were primed to show the basketball community how a team goes from perennial playoff contender to basic rebuilding with few big names outside of Paul.

Oklahoma City surprised more than the Mavericks by racing out to a 33 point first quarter, and then matched it in the second quarter to take a four point lead into the locker room at the BOK Center in Tulsa.

The Thunder would go on to outscore Dallas in both the third and fourth quarters – by four in the third and seven in the fourth to win the game, 119-104 in front of over 12,000 Thunder faithful.

It was a breakout game for the young man the Thunder look to take on the mantle of the team, Shai Gilgeous-Alexander, acquired from the Los Angeles Clippers (along with Danilo Gallinari) for Paul George.

Gilgeous-Alexander finished with a team-high 24 points, shooting 58.3 percent. Steven Adams, recent subject of trade rumors, hit for 17 points, but just had three rebounds and three assists. Dennis Schroder shot over 83 percent for 13 points, six rebounds and five dimes, Terrance Ferguson added a dozen and Gallinari hit for 10 points in 17 minutes. Paul had a modest six points in 17 minutes and a meager four assists.

As for the aforementioned Porzingis and Doncic, both registered a DNP along with Dwight Powell and J.J. Barea, a huge reason that the Mavericks didn’t move the barometer on OKC.

Dallas was led by Justin Jackson and Maxi Kleber who popped for 14 points apiece and not much else. Fourteen other Mavericks played and scored at least a deuce, with Jalen Brunson being the only other Maverick to hit double digits at 10, the team going for only 36 percent from the floor in Tulsa.

While it may have been a gift game for the Thunder (who play these very same Mavericks again on Monday night in Dallas), it gave the team some basic first wins of the pre-season, building blocks to use to get the young team through what will be an otherwise tough season.

Thank you, Rick Carlisle. I know it won’t be this nice on the 14th.

LA Clippers Preseason Check-In
Have we seen the last of Mr. Triple Double?