Time to panic? Kentucky falls to 1-4

With Saturday’s 63-64 loss to the Notre Dame Fighting Irish, the Kentucky Wildcats have reached a historic low with a 1-4 record to begin the season. Including now four straight losses, two coming at home, this start is the worst since Joe B. Hall’s 1984-1985 team. That includes John Calipari’s previous low water mark of the 2012-2013 season, in which the team managed to start 4-3 before eventually sputtering to the NIT. 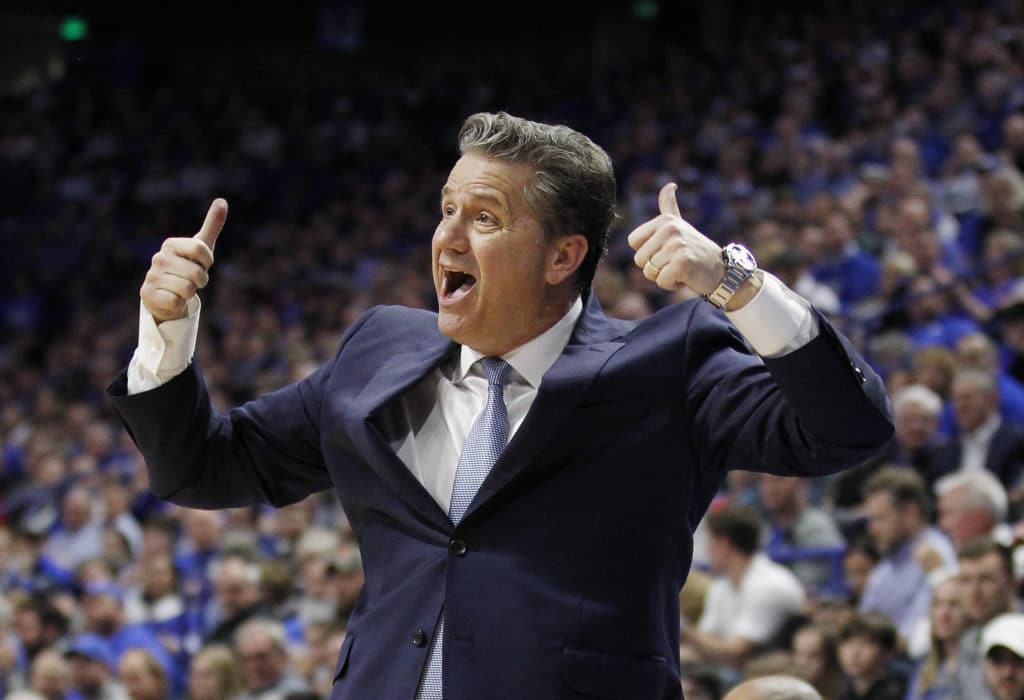 With Saturday’s 63-64 loss to the Notre Dame Fighting Irish, the Kentucky Wildcats have reached a historic low with a 1-4 record to begin the season. Including now four straight losses, two coming at home, this start is the worst since Joe B. Hall’s 1984-1985 team. That includes John Calipari’s previous low water mark of the 2012-2013 season, in which the team managed to start 4-3 before eventually sputtering to the NIT.

For what it’s worth, Kentucky did show some life in the second of Saturday’s loss. After a first half where Notre Dame couldn’t miss and Kentucky simply couldn’t hit, the cats trailed by 22 at the midway point. Kentucky’s 16-0 second half run for made it a close game in the final minutes, but ultimately senior transfer big man Olivier Sarr missed a potential game winning bucket as time expired.

So, what’s the deal? Kentucky does have a young roster, but that’s pretty much a given at this point. The veteran leadership they do have consists of two transfers, Sarr and Senior guard transfer Davion Mintz. The only returning Wildcat from last year’s team, Keion Brooks, is still nowhere to be found with a calf injury that Calipari described as “nothing major” back in October.

Couple the lack of returning experience to the lineup with the fact that the COVID-19 pandemic severely limited their ability to practice playing as a unit against other teams and you have the imperfect storm, a 1-4 start. To make matters worse, the supposedly star-laden freshman class has struggled to make an impact, to put it kindly.

Guard/forward BJ Boston entered the year as Kentucky’s highest ranked recruit at 7th in the nation, according to ESPN. From a distance, Boston’s early numbers look pretty good with 14.6 PPG and 6.2 RPG, but the freshman has been inefficient in getting there. He’s only shooting 38.4% from the floor, including an offense-crippling 19.2% from behind the three-point line. Boston has played out of control at times, exhibiting questionable shot selection and turning the ball over too frequently at 2.5 times a game.

Following Boston, guard Terrence Clarke was the next highest ranked recruit for Kentucky at number 10 in the nation. Like his counterpart Boston, Clarke has struggled to find traction in the young season. He too has scored well, with 13.8 PPG, but turnovers have been an even greater problem for Clarke, with 3.4 a game. Clarke has been more efficient from the field with a 49.1% overall, but it seems he may need to improve his perimeter game, handle, and passing given the team’s lack of a go to guy in the backcourt.

Speaking of the backcourt, freshman guard Devin Askew has been far worse than both Boston and Clarke. It’s still early obviously, but the five-star, number 26 player in the country is averaging 5.4 PPG, 1.8 APG, shooting 38.1% from the field and turning the ball over 2.6 times a game. Furthermore, the freshman guard has struggled to defend the perimeter, as he and the rest of his teammates have surrendered three-point baskets at an alarming rate. In recent games, Askew appears to be taking more of a back seat to Mintz, but both guards may sit more if Calipari instead runs Clarke at the point.

After Saturday’s loss to Notre Dame, Coach Cal insisted that the offense “must run through Clark and Sarr, nobody else.” Which certainly seems to indicate that Kentucky may be moving forward with Clarke as their floor general. Feeding Sarr, the former Wake Forest standout, seems wise as well, considering the big man has scored efficiently around the rim and from mid-range as well. Sarr tried to take over down the stretch against Notre Dame, but his 22 points, seven boards and three blocks weren’t enough for Kentucky to climb out of the hole they dug in the first half.

In addition to featuring Clarke and Sarr, Kentucky will want to get freshman forward Isaiah Jackson involved as well. The 34th recruit in the nation certainly needs to refine his game, but the athleticism as a finisher, rim protector and rebounder are evident. Jackson has averaged 9.4 rebounds and 2.8 blocks per game, chipping in 6.4 points per contest as well. He doesn’t yet possess much touch around the rim but if he can use his frame and hops to get offensive put backs or to keep possessions alive, Calipari will want to find space for him on the floor. Or one would think at least. Jackson was sort of in foul trouble, with three early in the second half against Notre Dame, but finished the game still with three fouls, only playing 16 minutes in the one-point loss.

From an overall team’s perspective, Kentucky has struggled to score. These offensive woes have been even more pronounced from behind the three-point line. That can make it awfully difficult to keep pace with opponents who hit as many threes as the Wildcats have been allowing on the early season. If you’re trading twos for threes, you need to take care of the basketball, score efficiently and play good defense. Kentucky hasn’t really done any of those three things effectively and their record reflects it.

The road ahead doesn’t appear to be much easier for Kentucky. The cats will take on the 5-1 UCLA Bruins in the CBS Sports Classic in Cleveland, Ohio on December 19th.  Following that game, they’ll hit the road to Louisville to play the archrival Cardinals on December 26th. Regardless of how those next two games go, Kentucky will enter conference play with a losing record for the first time since Eddie Sutton’s 1988-1989 team. Now that’s a low water mark that I’m sure Calipari and company will be eager to rise above quickly.

There is still plenty of basketball left to be played, but Kentucky will have to improve quickly if they want to have any hope of a March Madness birth. Calipari teams typically do age well as the year progresses, but it remains to be seen whether this unit has too much aging to do in too little time. Kentucky’s season is hanging in the balance at a time when teams can usually shrug it off and insist that it’s still early. Power conference bubble teams don’t usually have that many more than 10 losses after all. Kentucky may have the talent to turn things around, but until they can improve on 1-4, many will be left to wonder if the sky is falling.