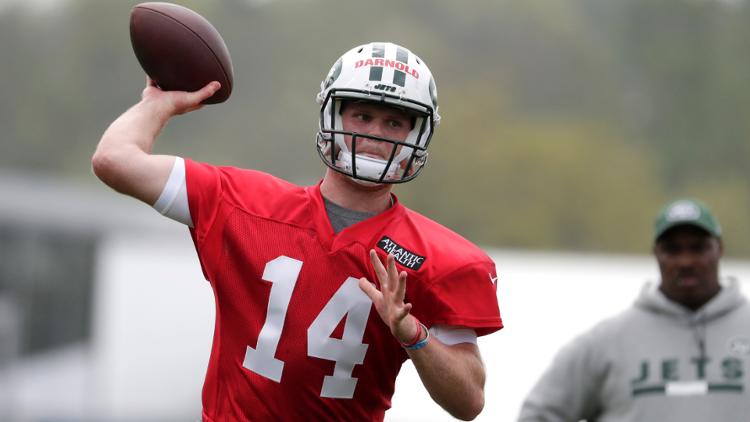 When asked if all three quarterbacks would play Bowles said “Everybody on that field dressed better be ready to play.” Has he made any decisions for Friday’s game? “In my head I have, but again I haven’t met with the coaches yet. We are going to meet in the next two days and discuss it and we will go from there.”

Sam Darnold who missed the first three practices of camp has had reports of under-thrown balls and interceptions in practice. When asked about Darnolds struggles Coach Todd Bowles was quick to defend his rookie quarterback.

“I don’t think he struggles, I think that’s part of it. I think everybody on the field is just working to get better. It’s not Sam struggling, there’s days when defense misses some things and individual positions, it’s just part of being in camp. It’s part of being a quarterback and part of the position. I am very happy where he is right now and we’ll go from there.”

Bowles talked what he has seen as far as the under-thrown balls and how to fix it by saying “It could be the route run wrong, it could be his feet aren’t set, it could be over extending the arm, it could be a hand in his face. There’s a lot of factors that go into those things. When you sit down and look at film you get to see all that.”

When asked if a possible rotation for Friday’s game would be McCown, Bridgewater, and then Sam Darnold he said “There is a chance, yes. ” Which he later confirmed on ESPN Radio by saying The most likely scenario is Josh McCown starting and playing a series or two, then Teddy Bridgewater playing the rest of the first half and rookie Sam Darnold getting the second half.

Besides Darnold the Jets coach noted he is looking forward to see some of the other Jets rookies in the game on Friday when asked said “I’m anxious to see all of them. I got my eye on a lot of people, some free agents as well and some guys we got from different teams. It’s going to be interesting Friday night seeing everybody in action.”

In addition to Fridays game there will be opportunities to see some of the rookies, potential free agents, and the other new guys get reps when the Jets travel to Virginia for a week of joint practices with the Washington Redskins, Bowles talked about that decision and what he expects going in. “We have been trying to have them over the years, and it’s great to see some of the younger guys get more reps. Whoever doesn’t play that much in the games get to play in practice and it’s good to go against a different scheme. You get tired of going up against the same offensive and defensive schemes, and they’re a very good football team and they have a lot of things they do well. It will be a good test for some of the guys that won’t play in the game a lot next Thursday. ”

As a coach Bowles was asked if the return to Virginia brings any concern for Terrelle Pryor and any back and forth with his old teammates “No Coach Gruden, he coaches his team well. It’s just talk and banter. We are going down there for them to make us better, hopefully we make them better and we can get better as a team. Anything else to me, is nonsense.”

Some quick injury and lineup updates Bowles had this to say.

On Lorenzo Mauldin limping off at practice:

“I didn’t see him limp off. I’m sure his leg was tight when he came out. I don’t know if that’s it, but I’ll go check and see what is wrong with him. ”

“No, just a little tight. We just hold him out a few days here and there, no different than anyone else in camp. ”

On Brent Qvale getting time at left tackle:

Top Five Questions the Giants Have In The Pre-Season: #5 Who is the Backup QB?
Giant Take Away’s From The First Pre-Season Game