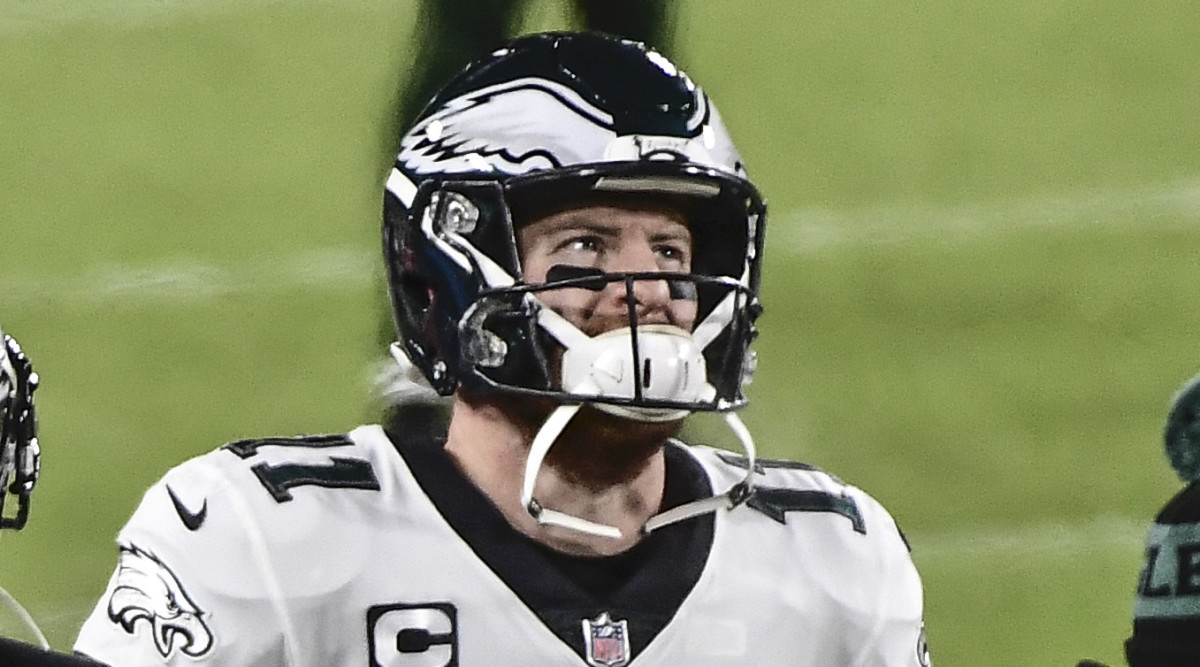 Coming off one of the more interesting weeks in an extremely interesting season, the NFL began Week 13 with a great slate of games yesterday. Featuring multiple games with playoff implications and some wild finishes, Sunday brought a lot of intrigue as we head into the final month of the regular season. Let’s take a look at some of my favorite moments from yesterday in this NFL edition of Tommy’s Top 3.

Let me be upfront here. Carson Wentz has not looked good this season. Yes, you can look at the fact that his receiving core has changed almost every week or the fact that his offensive line has been a revolving door for defenses. But the former MVP candidate has made poor decisions week in and week out that have cost his team and may have finally lost him his spot in Philadelphia. Wentz has made a career out of playing hero ball, trying to will his team to victory by making the “OMG” play. He loves to roll out to his left and force passes into tight windows which has led to a lot of turnovers this year and head coach Doug Pederson finally saw enough yesterday.

Pederson made the move to second-round pick Jalen Hurts after Wentz and the Eagles offense put up only three points midway through the third quarter. And in my opinion, it was the right move at the right time. Hurts came in and gave the Eagles a chance in this game, but it was too late as the Packers closed it out for a 30-16 victory. His first career touchdown on a 4th and 18 was beautiful, rolling to his right and delivering a touch pass to Greg Ward over one of the better corners in the game in Jaire Alexander. The young rookie looked comfortable running the offense, creating plays with his legs and delivering accurate strikes to his receiving core, giving the team a possible glimpse into the future. The Eagles season is over and the end of the Wentz era may soon be over as well. It will be interesting to see who Pederson names the starting quarterback for next week’s game against New Orleans, but heading into the 2021 season, the Eagles may look completely different from the team that won the Super Bowl just three seasons ago.

Going into Sunday, the most anticipated game was easily the Cleveland Browns versus the Tennessee Titans. Both teams entered the game with 8-3 records and with division opponents nipping at their heels, yesterday’s game was must-win. For Browns QB Baker Mayfield, this was the game for him to prove that he could play against solid competition and he certainly answered the call. This game wasn’t even close in the first half with the Browns taking a 38-7 lead going into the half thanks to four touchdowns from Mayfield. The third-year quarterback has quietly played well the last few weeks, going five games without throwing an interception and leading his team to their first winning season since 2007.

Head coach Kevin Stefanski has turned this team into a powerhouse, even without stud wideout Odell Beckham Jr., and has made Mayfield look more and more like the #1 pick he was drafted to be. Mayfield’s deep touchdown strike to Donovan Peoples-Jones was a beauty, delivering a perfect strike on a play-action boot that completely confused the Titans secondary. I’m still not fully sold on Mayfield, but you can’t deny the progress he has made since the Browns made the switch to Stefanski before the season. He will have the chance to silence his doubters some more in the final stretch of the season with the Browns playing both the Steelers and Ravens as they try to make the playoffs for the first time since 2002.

In what was arguably the biggest win of the day, the New York Giants went to Seattle and beat the NFC West-leading Seahawks 17-12. Even without QB Daniel Jones, the G-Men found a way to win with Colt McCoy at the helm thanks to a solid defensive performance and a great game from running back Wayne Gallman. Gallman finished the day with 135 rushing yards, with 121 coming after contact. That’s an insane stat and one that shows Gallman as being one of the best young backs in the league. While the Giants probably won’t make any noise come playoff time, this is a team that has fully bought into Head Coach Joe Judge’s culture and one that just might find itself playing January football.

On the other hand, the New York Jets had the ultimate tank job as they continue to try and lose for the chance to pick highly-touted QB prospect Trevor Lawrence. The Jets seemed well on their way to their first victory of the season, leading the Raiders 28-24 entering the final seconds of the game. And then Defensive Coordinator Gregg Williams made the two worst play calls I have ever seen. With the Raiders on the Jets 46, Williams called a dime look with only one high safety, allowing Raiders QB Derek Carr the time to deliver a strike to Nelson Agholor that just fell out of reach of the speedy receiver. On the next play, Williams called a Cover Zero blitz, giving no help to his secondary and allowing Henry Ruggs to run right past his defender for the game-winning score. A bone-headed decision that ultimately cost Williams his job this morning, this is one of the many reasons we may see Lawrence pull an Eli Manning and force a trade come draft night. This franchise is going nowhere fast, and trust me, even if Lawrence puts on the green and white next season, it won’t make much of a difference.

Dawg Pound Report: Three Takeaways from the Browns Win in Nashville
The Jets Will Have the Most Attractive Head Coaching Vacancy