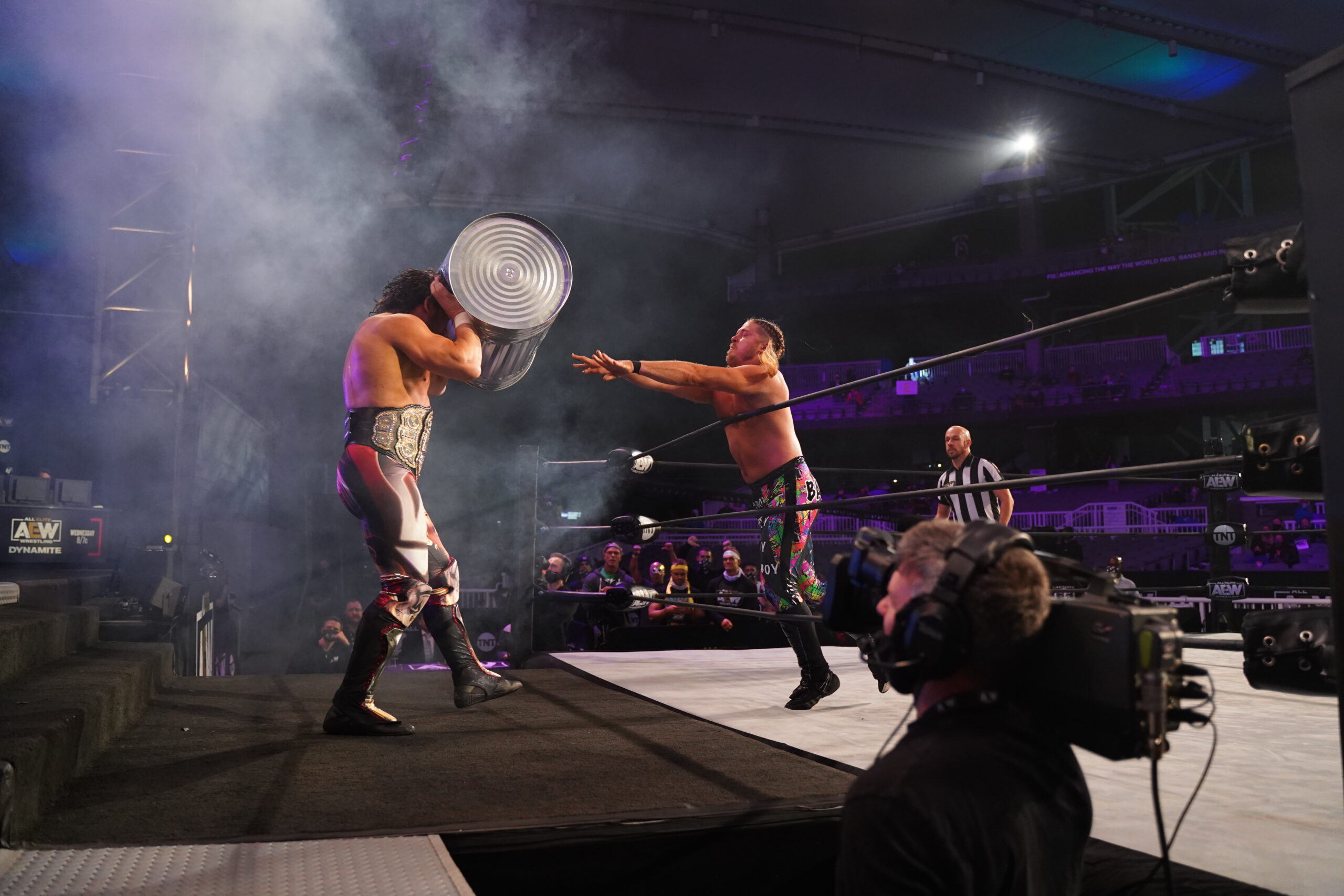 After blurring the lines of the wrestling world over the last two weeks, AEW Champion Kenny Omega found himself in a No-DQ main event against Joey Janela on this week’s episode of Dynamite. With a huge 12-man tag match and another appearance by Sting announced, AEW continued to build to next week’s special Holiday Bash. Let’s take a look at my favorite moments from this week’s episode in this edition of Tommy’s Top Three.

#3 The Inner Circle Continues Their Dominance

Following last week’s ultimatum, The Inner Circle had the chance to show their synergy in this huge 12-man tag team match. Facing off against Best Friends, The Varsity Blondes and Top Flight, Chris Jericho’s group found a way to eak out a win in what was a solid contest. Tag team matches with more than six participants are hard to pull off due to the lack of time normally given to them. However, this match was given a good amount of time in the middle of the show, allowing all 12 participants the chance to show what they can do in the ring. I really like what I’ve seen from Top Flight and this match was no different. The two brothers are extremely young and have a lot more learning to do in the ring, but they can be a staple of AEW’s loaded tag team division sooner rather than later. The Inner Circle picked up the win here, but I still expect the group to disband due to Jericho and MJF constantly trying to one-up each other. Overall, this was a solid match that let everyone involved shine, while also setting up a match between Top Flight and Jericho/MJF next week.

After Cody Rhodes’ victory over Angelico, Team Taz made their way to the ring to put the newly-announced father on “paternity leave”. Before they could make their way down the ramp, the lights went out and Sting appeared, holding off the heels with his signature baseball bat. He didn’t need to say anything and he didn’t need to get into action, but Sting sure made his presence known here. I’m amazed at how well AEW has handled Sting since he made his debut two weeks ago, hinting at future altercations with both Darby Allin and Rhodes without doing or saying much. This seems to be building to a multi-man match with Team Taz and Allin/Rhodes/Sting and another partner, and I’m all here for it. The only thing with Sting is the need to protect him, and I think AEW will put him in the ring with only the safest in the company. If and when that happens, I’m sure The Stinger will deliver.

#1 The Cowboy Finds Some Partners

For weeks, The Dark Order has been trying to recruit “Hangman” Adam Page to their group after Page split from former partner Kenny Omega. Page finally agreed to tag with two members of the group in Alex Reynolds and John Silver against Matt Hardy and Private Party in the best match of the night. The match opened the show and got the action rolling quickly with all six competitors flying around the ring. I can’t get over how good Page is in the ring. All of his moves look so fluid and they shouldn’t for a man of his size. The combination of Page with Silver and Reynolds led to some comedic moments and great action, but they couldn’t pick up the win against The Hardy Party. I implore anyone who has not seen the Being The Elite Youtube series to check it out because Silver is consistently one of the funniest members of the show and one of the main reasons I watch every week. Whenever fans return, I think he will be among the crowd favorites because of his BTE shenanigans and his awesome in-ring skills. This story is moving more and more to Page joining the Dark Order in the future, and I think it’s the right move. The Dark Order needs another big name in the fold, and Page is just the guy to fill that spot. It will be interesting to see how it develops over the coming weeks and if Page will continue to team with members from the group. A great opener that I recommend checking out if you missed the show.

And with that, we wrap up another edition of Tommy’s Top Three. This week’s episode of Dynamite wasn’t the best, but it still had some great moments that will advance storylines over the holiday season. Be sure to check back next week for my review of Wednesday’s special Holiday Bash!