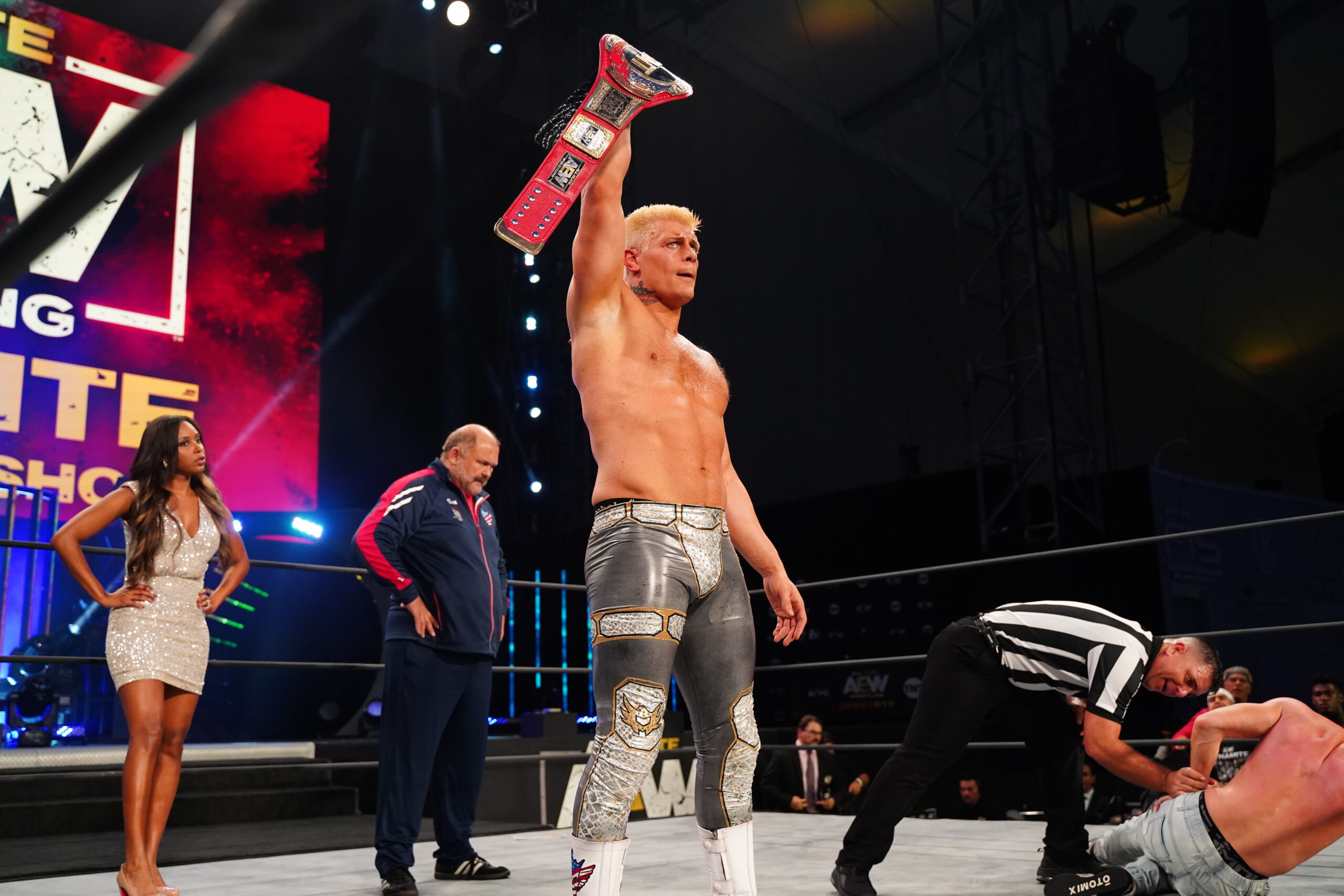 With the first full calendar year of All Elite Wrestling almost in the rear-view mirror, we’ll take a quick look back at 5 of the top matches from the last 12 months. Between singles competitions, tag team contests, championship bouts and even a ten man brawl throughout TIAA Bank Field, it was definitely a tall task to narrow down the list to just five.

Starting off the list is one of the more hard hitting AEW matches that we’ve seen. The defending champion Moxley had his hands full with one AEW’s brightest future stars in Darby Allin. A slap in the face from the challenger was met with a stiff right hand from Moxley. The physicality of the first 30 seconds was a bit of foreshadowing on yeh at was yet to come. The match was a showcase of the endurance and grit that the eventual TNT champion had inside of him and Moxley was the perfect opponent to bring that out. Moxley wanted to inflict just enough damage to keep Allin down without injuring the upcoming star. Even a piledriver was met with only a two count as Allin would refuse to yield. Finally it took Moxley’s paradigm shift, dropping Allin on his head and neck once again, in order to finish the match. That night Darby Allin showed the audience and everyone backstage that he had what it took to go toe to toe with the best in the world.

August was a hot month for dynamite in more ways than one. As temperatures fluctuated through the 90’s, another white hot match took place between the “American Nightmare” Cody and the leader of the Dark Order, Mr. Brodie Lee for the TNT Championship. Three months after his loss to Moxley for the AEW World Title, Mr. Brodie Lee had his chance to seize another championship and did he ever deliver. In just over 300 seconds, the title shifted hands as the pair came flying straight out of the gate. Cody was able to get in a few strikes on the Exalted One before he was pushed away and that was all the offense he would get. After eight successful title defenses, Cody finally met his match. The Exalted One tossed Cody around the area outside the ring like an empty track suit for about 3 minutes before a pair of power bombs and a discus lariat took the defending champion out. The match and what followed put over the power, strength and danger that The Dark Order had led by their leader Mr. Brodie Lee.

3. Private Party and Joey Janela vs. Matt Hardy and The Young Bucks – May 27

The Young Bucks and Private Party have history stretching back to one of the first episodes of Dynamite when Private Party upset The Young Bucks in the first round of the AEW Tag Team Tournament. The action in the ring, while it was a great match, was in my opinion overshadowed by all of the fallout. It was a back and forth action packed match with both The Young Bucks and Private Party showcasing their chemistry. At the end of the match Marq Quen picked up a knee injury and was helped by his tag team partner and Matt Hardy to the back which informed the relationship that would come to be known as Hardy Party between the three. Following the loss, Joey Janela decided that he needed a change of pace in order to start picking up victories. He then began teaming with Sonny Kiss in the following weeks. Which just leaves the Young Bucks. The Butcher and the Blade jumped the barricade and attacked the brothers still in the ring. At that point the newly signed FTR made their debut appearance in AEW to come to the aid of the Young Bucks. A match between FTR and the Bucks is something that fans have been crying out for years since both pairs claimed that they were the best in the world. The dovetailing stemming from this one match speaks volumes to the storytelling that AEW is capable of and it seems that everything happens for a reason in this company.

While the rest of the matches on this list were fought in the ring, this one took place in the parking lot outside of Daily’s Place in Jacksonville, Florida. The bad blood between these two teams had reached a boiling point and the only prescription was an all out fight in the parking lot, a fitting background after Sanata and Ortiz destroyed the van of Trent’s mom. All sorts of weapons were utilized by both sides including windshields, side mirrors, a lead pipe and even an engine block. With both pairs battered and bleeding, the four men gave their all to steal the show and came away with one of the top matches of the year. Nothing felt out of place and there were no awkward pauses when a combatant was looking for a weapon. The finish came when Orange Cassidy popped out of a car trunk with a chain wrapped around his fist and nailed Santana with an “Orange Punch.” The Best Friends closed the bout with two more moves, one for each of their opponents to put them away and grab the pin before being driven away in the back of Trent’s mom’s new van.

On one of the final shows with crowds in attendance before the global pandemic Kenny Omega, Hangman Adam Page and The Young Bucks put on one of the greatest matches of all time. With tensions between former friends at a high, the emotion was palpable in the air. Now adversaries, the four battled it out in a physically demanding 30 minute war. Adam Page, as the youngest competitor, felt the need to prove himself worthy to not just his partner Omega but himself after being discounted by Matt Jackson of the Young Bucks. Not a hair was out of place with this match, the story telling between the four in the ring alone would put this in contention for match of the year not to mention the athleticism from these men. Both sides gave everything they had for 30 minutes with a roaring crowd cheering them on for every single minute. This match had everyone watching on the edge of their seats. From before the bell rang to the last minute of the contest, nobody could be sure who would come out on top. Would the unlikely pairing of the Hangman and the Best Bout Machine be able to retain their belts or would The Young Bucks finally claim the titles for themselves? Adam Page was the deciding factor as he delivered Omega’s One Winged Angel finisher to Matt Jackson and then his own Buck-Shot Lariat to each of the brothers to pin Matt in the middle of the ring and continue their title reign.

With a remarkable track record, excitement abounds as fans eagerly wait to see what All Elite Wrestling has in store for them in 2021.