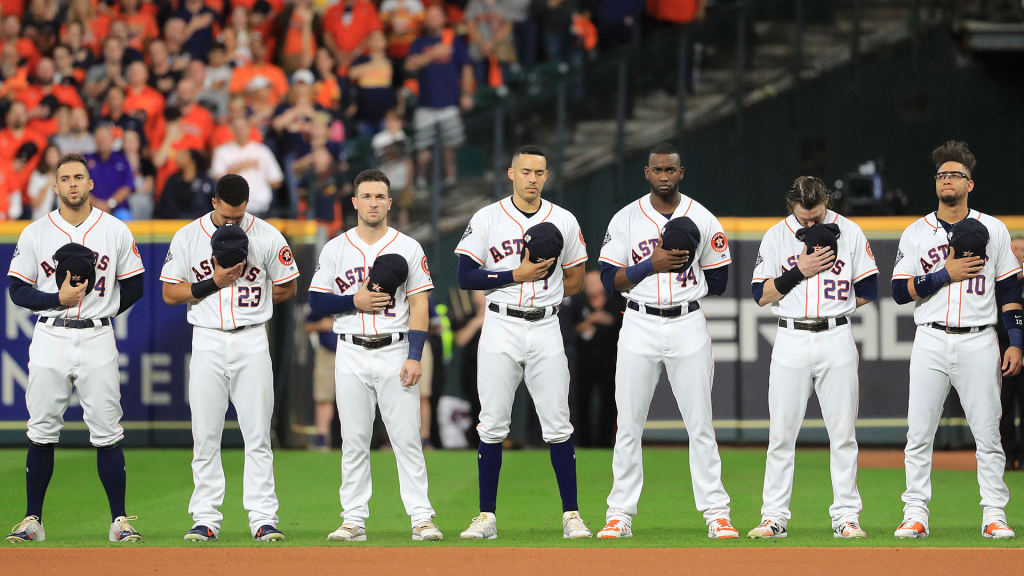 The Houston Astros just swept the New York Yankees in the 2022 American League Championship Series. As we await the World Series with the Philadelphia Phillies, here are five of the wildest Astros postseason moments.

Prior to Game 4 against the Royals, believe it or not—the 87-win Astros were up 2-1 against the 97-win Royals. Houston made the postseason for the first time in a decade, and they were poised to make an improbable run. At Minute Maid Park, the ‘Stros were leading 6-2 and heading into the 8th inning. The Astros sent in reliever Will Harris, needing six more outs to complete the upset. They had a comfortable lead due to strong performances by rookies Lance McCullers Jr. and Carlos Correa.

It was shortly given up.

The Royals climbed back using their pesky playstyle, knocking in four straight singles off Harris. The score was 6-3 with still nobody out. Manager AJ Hinch replaced him with lefty specialist, Tony Sipp, to hopefully stop the bleeding. It got worse. After giving up a fifth straight hit, a ball hit up the middle went off of Sipp’s glove, into a potential routine double play. Unfortunately, the ball bounced off Correa’s glove as well, into center field. This error scored two more runs, tying the game.

Luke Gregerson came in the game to keep it tied, but gave up an RBI groundout and the Royals took a 7-6 lead. They held on to win and beat the Astros, 9-6. This took their momentum to win Game 5, sending the Astros home. Kansas City eventually won the World Series that year. Fun fact: Houston was the closest team to beat the Royals during that postseason, so that’s something to brag about.

Every Astros fan remembers this game. A long, grueling, 6 hour behemoth of a game that lasted 18 innings. To this day, this is currently the longest postseason game in the MLB. Like the 2015 ALDS, Houston was also up 2-1, needing one more game to advance to the NLCS. Astros’ Brandon Backe took the start against veteran Tim Hudson. At the early going, it looked like the Braves were running away with this game. Leading 6-1 heading into the bottom of the 8th inning, they were six outs away from forcing a Game 5.

After a strong outing from Hudson, reliever Kyle Farnsworth took over in the 8th, in an attempt to get out of the inning after Hudson allowed Brad Ausmus and Eric Bruntlett to reach. Farnsworth was able to get Ausmus out at third base on Craig Biggio’s ground ball, but couldn’t get the second out due to a bad throw that took Adam LaRoche off the first base bag. With one out, runners were on first and second. Luke Scott came up to bat. The first pitch to Scott went off the glove of Catcher Brian McCann for a wild pitch, moving the runners to second and third.  Now there was first base open. After walking Luke Scott, Lance Berkman was up to bat.

He took Farnsworth deep, into the left field Crawford boxes to make it a 6-5 lead. His grand slam brought back Houston within striking distance. The Braves were able to take one run lead to the bottom of the 9th inning, looking to force a game 5 heading back to Atlanta. After two quick outs, Ausmus went up to bat.

Ausmus wasn’t known for hitting home runs, but this was the postseason. On a 2-0 count, the veteran backstop took a fastball to deep left center field that just barely made it over the yellow line for a home run, tying the game at six. All these runs were due to Kyle Farnsworth, as he was questionably still in the game after giving up the grand slam to Berkman an inning ago.

The Astros and Braves were now headed to extras. For the next seven in a half innings, neither team scored a run. Terrific pitching from both sides kept the game tied. This didn’t last forever, as both teams emptied their bullpens. Eventually, someone was going to give up the lead. That led to the 18th inning. Finally, Chris Burke of the Houston Astros, took a deep fly ball off a depleted Braves bullpen to left field into the Crawford boxes. After nearly two back to back nine inning games, the Astros prevailed, taking a 7-6 walk-off win, sending them to the NLCS. They eventually went on to make their first World Series appearance that year.

This game was otherworldly. After taking a 2-0 series lead against New York, Houston went on to lose three straight games in Yankee Stadium. Now at a 3-2 hole, Houston was on the brink of elimination. New York needed one more game to advance to the World Series for the first time since 2009. Luckily, the Astros took care of business in Game 6, winning 7-1. Veteran Justin Verlander was on the mound and silenced the Yankee bats.

But would they win Game 7?

Charlie Morton was supposed to start Game 7, but how well would he pitch? He got rocked in Game 3, allowing seven runs and didn’t make it out of the 4th inning. Fortunately, Morton bounced back in Game 7, going five shutout innings. After his contribution, who was going to replace him? The Astros bullpen was completely depleted during Games 3-5 in the Bronx. Manager AJ Hinch had a plan. He sent in another starting pitcher, Lance McCullers Jr.

The Astros needed four more innings from Lance to seal Game 7 and make a trip to the Fall Classic, their first since 2005. Although McCullers held on to a 4-0 lead during the first two innings, he started to lose control on his fastball. Additionally, both him and catcher Brian McCann noticed how Yankee hitters were having trouble laying off his power curveball.

The Birth of the “Snapdragon”

After giving up a leadoff work at the top of the 8th inning, McCullers elected to use only his curveball for the rest of the game. He threw 24 consecutive breaking balls to New York’s hitters, fooling them on every pitch, and earned the save, taking the Astros to the World Series. It was exhilarating to watch.  It’s utterly unbelievable how the Yankees knew that the “snapdragon” was coming, yet they had trouble executing good at-bats. Talk about completely taking over the game. This performance put Lance’s curveball on notice.

Yankees matchup Round 2: Astros were leading 4-2 heading into the ninth inning. Pitcher Roberto Osuna was on the mound looking to close out the series and make their way into the World Series. In 2019, Osuna led the American League in saves. However, he wasn’t as sharp in Houston compared to his Toronto Blue Jay days. Acquiring Osuna in 2018 was a polarizing issue, as he dealt with a personal domestic issue, which didn’t appeal to most MLB rosters. Nevertheless, his numbers were solid, and general manager Jeff Luhnow pulled the trigger anyway.

Whether or not this hindered his performance on the Astros, he was given a task to get three outs and win the game. Third Basemen Gio Urshela lined a ball into left field for a leadoff single. After striking out Brett Gardner, DJ LeMahieu was up to the plate. Throughout his career, LeMahieu has always been a tough out. He rarely strikes out, and almost always has loud contact on the baseball. After a 10-pitch at bat, LeMahieu smacked a deep fly ball, barely getting over the glove of RF George Springer. It landed just over the right field stands for a home run. Game was tied. 4-4.

Silence in the Stands

Osuna was able to retire the final two hitters, sending the game to the bottom of the ninth. The Yankees sent out hard throwing closer Aroldis Chapman to the mound. From 2014-2019, Chapman was one of the top three relievers in the game. His fastball topping at 105 mph blew by hitters in a hurry. Chapman got the first two outs, retiring Martin Maldonado and Josh Reddick. The lineup flipped, sending George Springer to the plate. In the Astros favor, Springer was able to work a walk that extended the inning, sending Astros favorite Jose Altuve to the plate. Altuve is known to love fastballs, so Chapman elected to use his slider.

However, he fell 2-0 after two straight fastballs well out of the zone. Chapman’s next pitch was a slider that was in for a strike. Altuve read his release point and was waiting for his next pitch. Chapman needed to find some way to get into the strike zone, but didn’t use his fastball for obvious reasons. He elected to use his slider again. While it found the zone, it also found the barrel of Altuve’s bat, hitting it to deep left field for a walk-off home run.

This was an exhilarating moment for Houston as they advanced to their second World Series appearance in three years. Yes, the Astros took the series in six games, but this was no easy task. Both teams appeared evenly matched. The run differential was one between both teams, with Houston edging the New York Yankees.

Strap in, this moment consists of the entire game, a three-part epic with suspense, constant action, and multiple lead changes. The series is tied 2-2 with Game 5 playing in Houston. It all started with Dallas Keuchel having a shaky start, giving up four runs in 3 2/3 innings of work. At this point, it looked like Dodgers ace Clayton Kershaw was going to run away with this four run lead. But here came the Astros, as Carlos Correa ripped an RBI double to get Houston on the board.

This later led to two men on base for Yuli Gurriel, who smacked a home run into left field to tie the game. After nearly four innings, this game was already nuts. Houston and Los Angeles began trading leads, as Cody Bellinger belted a three run homer in the 5th inning, taking a 7-4 lead. This was squandered quickly, as MVP Jose Altuve hit a three-run homer of his own, tying the game again at seven.

Heading into the top of the 7th, the Dodgers scored a run due to a defensive miscue by George Springer. Springer attempted to dive for a line drive but it went past him, leading to an RBI triple. LA took a 8-7 lead. Deeply frustrated by his defense, he sought revenge. Leading off the next half inning, Springer sent the first pitch onto the left field train tracks to tie the game again at 8-8. Houston finally gained control of the game by scoring three more runs in the same inning, leading 11-8.

The game was 12-9 heading into the ninth inning. Reliever Chris Devenski was on the mound to shut the door. Attempting to take a 3-2 series lead heading back to LA, he was unsuccessful. LA tied the game again on a two-run homer by Yasiel Puig and a game-tying RBI single by Chris Taylor. The game was 12-12.

Up to this point, pitching was just not going to win this game. If the Astros wanted to win this game, they needed to walk it off, and that’s exactly what they did. At the bottom of the 10th in extras, Catcher Brian McCann got on base due to a HBP. Next was Springer, who walked. Manager AJ Hinch needed more speed on the basepaths in case a ball was put in play. His decision was to replace McCann with speedster Derek Fisher. This proved to work, as the next batter was Alex Bregman, who drove Fisher in with a walk-off single. Finally, the slugfest of a game ended, with a final score of 13-12. This proved to shift the momentum, as Houston eventually finished off LA in seven games, securing their first World Series title in franchise history.