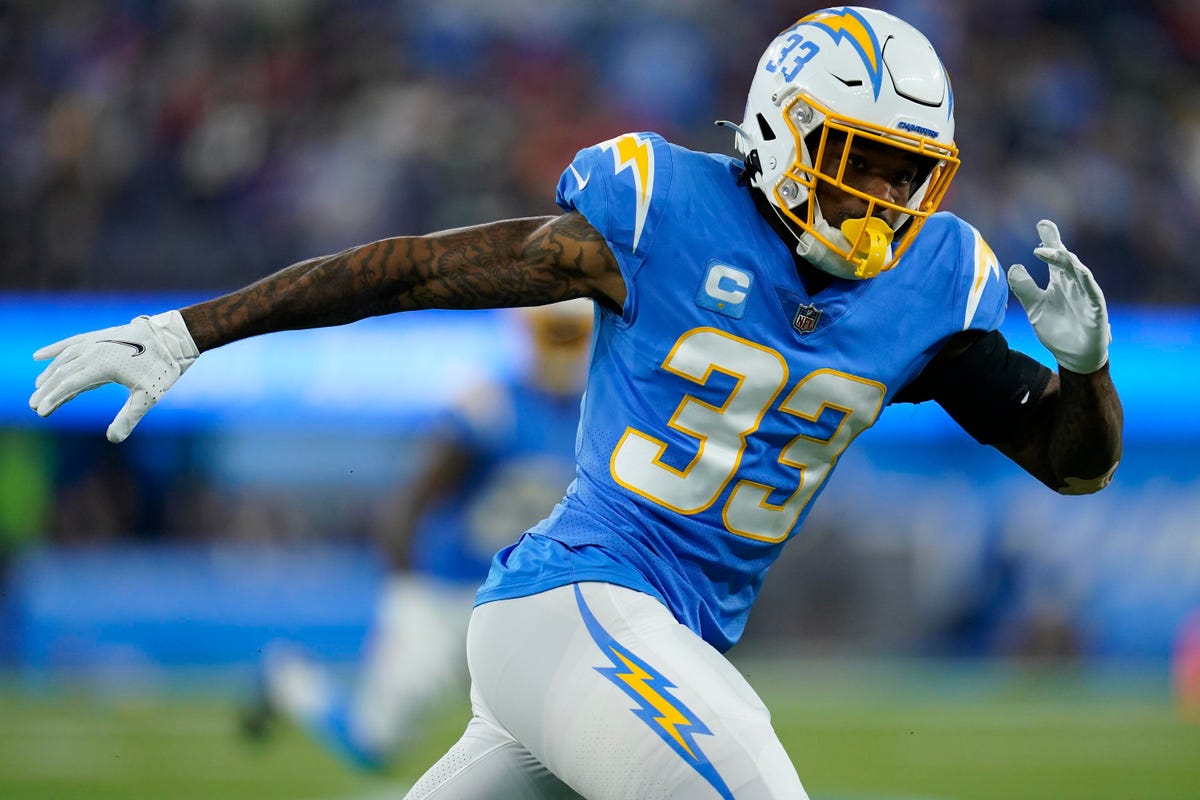 Wednesday was an interesting day to say the least. The commute to Jack Hammett Sports Complex in Costa Mesa was smooth. To my surprise there were only 5 people in line when I arrived. However, a half hour before the gates were to open the line was as long as any of the other day. Today the Chargers hosted some local football teams including Edison High School, their affiliated peewee team out of Huntington Beach, the team from California School for the Deaf, and Pasadena City College.

Another day and still no contract for Derwin James. The mystery of where James disappears to was solved today. James along with some of the injured players go to the soccer field to get some work in. Players included defensive back, #29 Mark Webb, and tight end, #88 Tre’ McKitty. Due to the distance, I could not tell if the coaches and trainers were team affiliated or personal. It is a positive sign to see that James is participating in some way. Hopefully, when his contract is finalized he stays healthy.

Another good sign for the Chargers was seeing Kyle Van Noy suited up today and a full participant in the full padded practice. Andrew Trainer was still sidelined and did not participate.
Today’s practice was as much promising as it was concerning. Michael Bandy continues to impress and show off his solid hands. I know I keep up on the fan train, but I see something special in his play. The chemistry he has with Justin Herbert was on full display. They will undoubtedly only get better with time. This will be greatly beneficial for the Chargers down the stretch. Josh Palmer continued to impress. With the Chargers leaning towards a bigger lineup, Palmer fits the bill while providing a good safety valve for Herbert. This creates a field that allows Herbert to feel more comfortable in the pocket and could force the defense to condense leaving open the deep ball. Trey Pipkens III continued to take the majority of first team reps at right tackle. I believe, barring any injuries, he will be the Chargers’ choice for starting right tackle.

This was where things reached a peak, but also hit some lows. It peaked with a beautiful pass by Justin Herbert to Keenan Allen down the right sideline. The pass was perfectly placed and Allen not only beat the corner, but was able to split the safety and score. The refs called the play dead and said he would have been tackled, but I believe Allen scores on the play. During this session, things started going downhill. It could be the heat or could be a midweek hurdle. The offense was mentally off leading to multiple penalty calls offsides, false starts, and holding throughout the remainder of the team session. It didn’t help that rookie center, Isaac Weaver and rookie linebacker, Ty Shelby suffered leg injuries. Hoping that these aren’t long term problems, but just some cramping from dehydration due to the heat today.

Another downside for the team was the performance of Chase Daniel. He showed poor decision making throwing into double and triple coverage along with over-throwing and throwing behind his targets resulting in two interceptions and a pick-six for the defense. The Chargers were due for an off day. Until today, training camp had run smoothly and had very minimal errors. There are bound to be some hiccups as roles are tested and the Chargers begin to think about how players fit into their long term game plan for the season.

In three days, the Chargers face the Superbowl 56 champion LA Rams at SoFi. Even though this is a preseason game, it has to mean something to the Chargers who share the house with the Rams at SoFi. On Saturday, we will see how the Chargers’ coaching staff chooses to play it, how the players face up and what the Rams bring to the field. It will be a very interesting game, preseason or not. It will also give us a preview of the teams week 17 matchup.