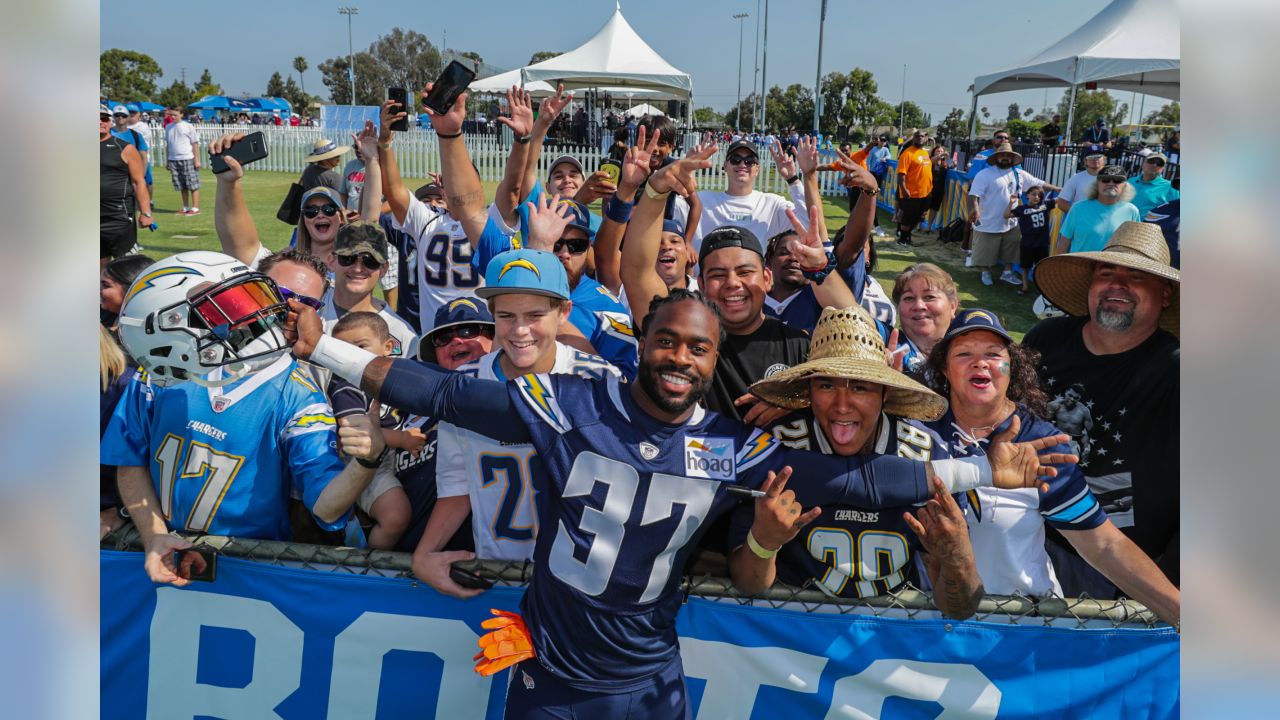 This was the Los Angeles Chargers ninth day of training camp overall and the sixth day open to the public. The crowd arrived early today. By 7 am the line stretched as far as the eye could see. Once they entered, the crowd was reserved. Quietly anticipating what and who they would see today. The players and the crowd enjoyed the events of the day.
After having a few days to get acclimated to pads, the Chargers decided to go shells (helmets only) today. With the first week under their belts, it was interesting to see the progress the offense made. They are beginning to click. The new free agent additions are fitting in, and the offensive line is shaping up. Some players I personally was keeping an eye on included Isaiah Spiller, Joshua Palmer and Michael Bandy, as well as position battles between Trey Pipkens III and Storm Norton, and J.C. Jackson and Mike Williams. We wouldn’t be seeing any physical drills today, but we would get a peek at how sharp the Bolts are becoming on both sides of the ball.
The day started with Derwin James Jr.’s usual appearance, once again not in a helmet while co tract terms are being settled. The Chargers general manager, Tom Telesco, assured fans Thursday on The Pat McAfee Show that the team will get an extension done with James. I thought that a deal would be done by Friday, but I guess fans will have to wait a little bit longer to see James in full action. Monday, James seemed to disappear after his sighting during walkthroughs. With a similar showing today. The gentleman I was standing beside called him a Ghost. Who knows, once his contract is finalized maybe he can earn that nickname, because no one will see him coming.
After the walkthrough, fans got to see the wide receivers work on route techniques and their hands. Besides the obvious standouts, Mike Williams and Keenan Allen along with Joshua Palmer and Michael Bandy continued to show why they should have a starting spot on this team. They continued to show off their route running abilities. Despite some early drops, their hands were good when it mattered in the 11-on-11 team period.
I am really starting to like Michael Bandy. As I said in my article from Monday’s training camp session, he really resembles Julian Edelman or Wes Welker. He went undrafted in 2020, but was determined and spent time with the Conquerors of the Spring League. Drafted by the Chargers a little over a year later this past June. At the age of 24, he is reported as 5’10” and 190 pounds. Bandy earned impressive stats in college by successfully creating consistent separation at the top of his routes and even acting as a slot receiver. His career may have started off slow, but by the time it finishes I think he will make an impact for the team he plays for. Hopefully, that team is the Chargers.
The 11-on-11s were very interesting. We got to see Trey Pipkens III start at right tackle and he took over the majority of the reps at right tackle today. Could this signal that the Chargers are leaning towards Pipkens starting over Storm Norton? Only time will tell. The offense struggled to get started. Leading to an early win for the defense. Williams beat out coverage provided by Jackson to catch some, but Jackson again kept him to short completions. During offensive reps for the second team, Jackson was able to pick off Easton Stick. Isaiah Spiller also got some reps in with the second team, showing off his downhill running and receiving capabilities. I foresee him sharing the workload with Austin Ekeler this season.
Overall, I thought it was a very good practice day. It wasn’t without its mistakes here and there, but that’s what training camp is for. It is time to work the kinks out and get ready for the season ahead. I reaffirm that I strongly believe this team is destined to make a deep playoff run. Though I might be a little over ambitious given it’s only the ninth day of training camp. The air of this team signals that they have what it takes. All we have to do is wait and see.