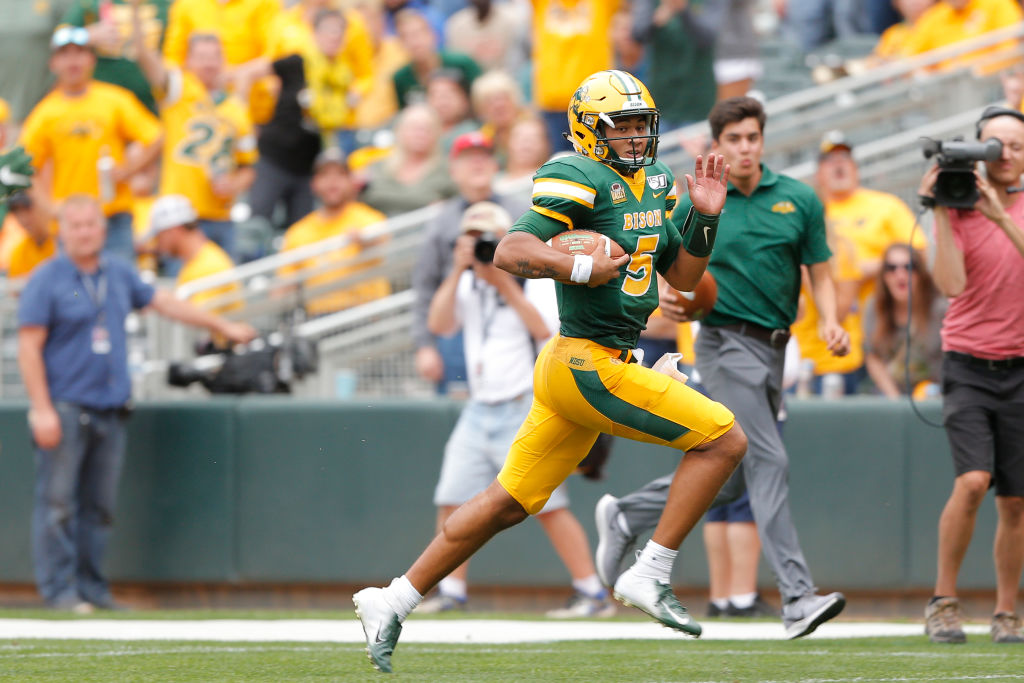 In 2018, Trey Lance was a little known 2-star prospect out of Minnesota. He committed to play football at North Dakota State on May 23rd, 2017, and the rest of they story, they say, is history. Lance only played for one snap in the 2018 Bison season, when he was second on the depth chart behind future NFL Draft Pick, Easton Stick. He ended up red-shirting his freshman year.

Entering the 2019 fall college football season, Lance was slated to be the new starting quarterback for the Bison. He was supposed to have a good red-shirt freshman campaign, but what he did during that year surprised everyone. Lance completed 192 of 287 passes for 2.786 yards that season. He also threw 28 touchdowns, ran for 14 touchdowns, all while throwing 0 interceptions.

After the pandemic hit in late winter, early spring in 2020, the 2020-2021 FCS season was in major jeopardy. The Big Ten and Pac-12 were the last two Power Five conferences to commit to playing in the fall of 2020. However, on September 16, 2020 the FCS commissioners voted to incorporate a spring season for the FCS, along with an adjusted play-off that only features 16 teams, with ten automatic bids.

This decision forced Trey Lance to make a decision on his NFL future earlier than expected. If he were to be playing this Spring, he would not have been able to prepare for the NFL Draft. So North Dakota State decided to play one game in the fall of 2020 to showcase Lance. While that game didn’t really showcase all of Lance’s talents, it did provide NFL scouts one last game to look at Lance’s skills.

In that game versus Central Arkansas, Lance was 15-30 for 149 yards, with two touchdowns and one interception. It was definitely not the one of Lance’s best performance, but it was the last one NFL Scout’s would see before the 2021 NFL Draft.

Experience: Honestly, Lance just needs more snaps to improve his game. While North Dakota State could play with and beat a lot of Non-Power 5 Teams, their opponents usually can’t. Lance really has only has 17 games of film for NFL Scout’s to watch. This could cause some teams to take a more experienced quarterback rather than Lance. In Mel Kiper’s most recent mock draft he has former Alabama quarterback Mac Jones being picked slightly ahead of Lance at 8 for the Panthers, while Lance goes ninth to New England, which would be a dream scenario for Lance and his team.

Ball Placement: This really only happens when Lance is rolling out, but sometimes he doesn’t finish his throwing form well when he throws outside the pocket. However, so far he’s been good about that, and it is easily correctable.

Arm Strength: Before I write this, let me just say, arm strength can easily be improved at a young age, and his arm strength is good enough for a top ten pick. However, like a lot of quarterbacks he can improve on his deep ball, especially outside of the pocket. Also his throwing form is almost identical to former Colts number one overall pick, Andrew Luck. Luck’s torn labrum in his throwing shoulder was one of the reasons he retired early.

In this film, you see both the good and the bad from Lance. He finished the game 15-30 for only 149 yards, two touchdowns, and his only interception of his college career. Watch Below: