Turning Point For The Utah Jazz 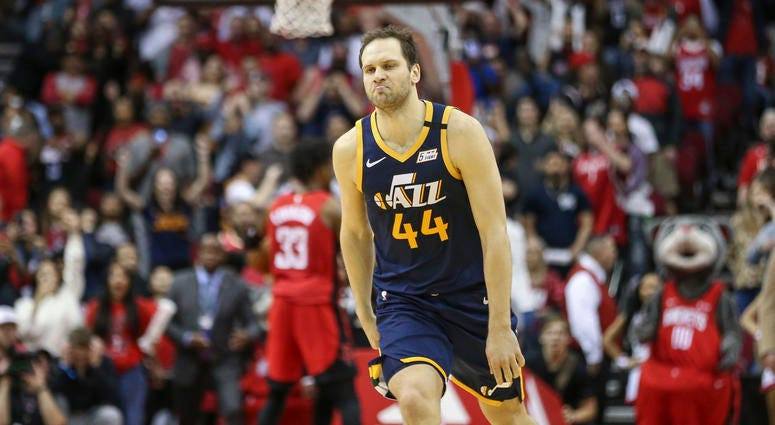 If you checked Twitter or watched SportsCenter Sunday night, you’ve likely seen the replays of Bojan Bogdanovic’s game-winner. Down 113-111 with 1.6 seconds left in the game, Bojan came off of a screen to catch the inbound pass nearly five feet beyond the three-point line, rose above two defenders and nailed the game-winner, nothing but net. This moment and shot, which were big, are even more significant than the replays show.

Bogdanovic, who has averaged nearly 21 points per game this season, had only made one other field goal in the 32 minutes prior to sinking the game-winner in Houston.

The sheer difficulty of the shot was impressive. Receiving the ball deep behind the arc, and making a three-pointer to win the game with two defenders draped over him in a way that tomorrow’s L2M reports may find it to be a foul. But none of that is more impressive than making the shot after a quiet game in which he was shooting 20%.

The win comes at a good time for the Jazz, who, after going on a run that had them being the hottest team in the NBA, has recently lost four of their last five going into Sunday’s match-up. That first loss came from the same Houston Rockets team they were playingon Sunday. But that night the Rockets were without their stars James Harden and Russell Westbrook in a game that Eric Gordon scored 50.

During that game and the subsequent losing streak, the Jazz showed they had difficulty scoring against switching defenses. On Sunday, Utah proved to make the necessary adjustments and saw big games from multiple players.

Jordan Clarkson continued to thrive in his role as a bucket getter off the bench for the Utah Jazz and scored a team-high 30 points with six rebounds while shooting 12/19 from the floor.

Some of the most important minutes of the game came from Jazz rookie Juwan Morgan who in just seven short minutes ended the plus eleven for his plus minus. The contribution came with Rudy Gobert on the bench and allowed the Jazz to be able to switch everything defensively and maintain favorable matchups. The rookie was also able to finish close to the hoop for four points and also come down with three rebounds. A bench role the Jazz may need to take a look at as the season rolls on.

Although it’s just one game in an 82-game season, this win against the Rockets feels much bigger. It is a confidence builder and came after recent struggles. The Jazz seem to have addressed a weakness with their offense finding ways to attack a switching defense, while also getting key defensive minutes with Rudy Gobert on the bench.

As the All-Star break approaches, Utah has shown an ability to adjust whether it be key roster moves from the front office or personnel and game plan tweaks from head coach Quin Snyder. Both of these are very encouraging for their hopeful postseason run in this the 2019-2020 NBA season.

Was No Move the Right Move For Boston?
All-Star 2020: Welcome Home Chicago Natives