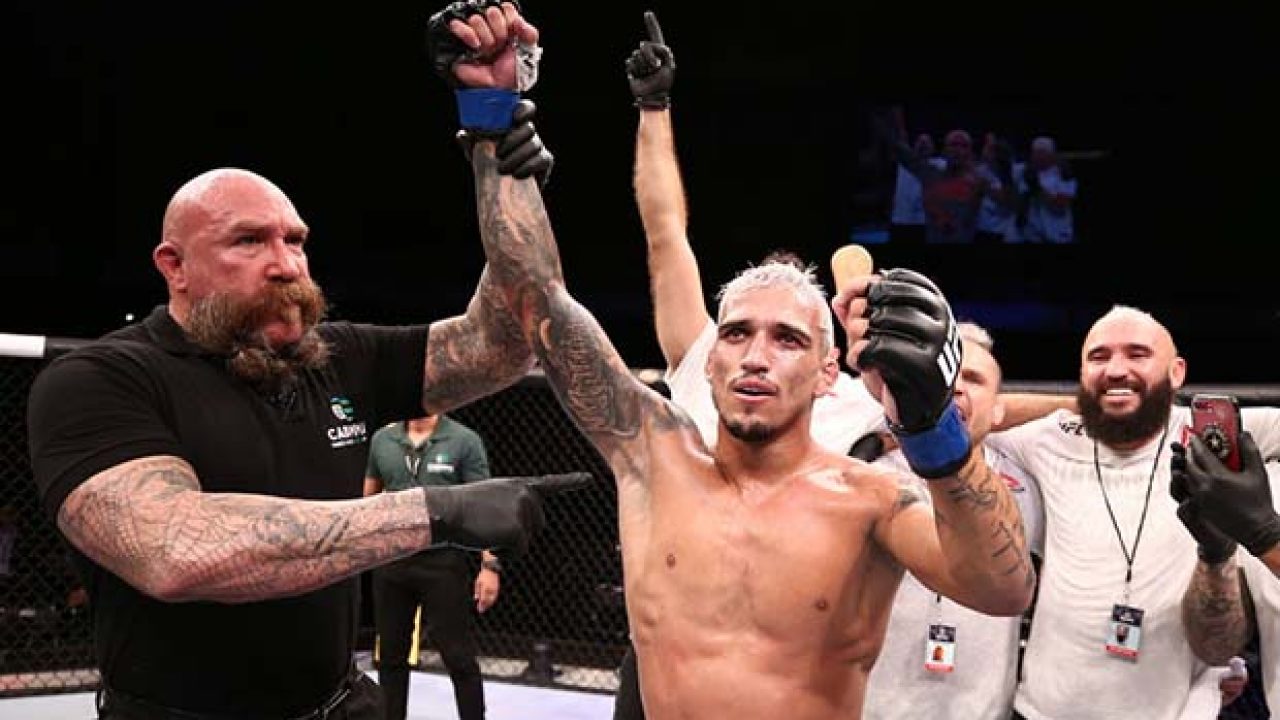 UFC Fight Night 170 was a must watch; not only because it was the only sport on TV due to the Coronavirus, but because the card was stacked as well. Many of the Brazilian fighters showed out in front of the nonexistent home crowd.

In the evening’s main event, Charles Oliveira proved yet again that he is serious problem for anyone in the lightweight division. Moments after submitting Kevin Lee in the third round, Oliveira let the world at home know who he wants next.

He stated via translator “Tony Ferguson or Khabib… I’ll be sitting there first row… there’s no way to deny it, I’m one of the best in the world… I’m ready; the belt’s going to be mine.”

Oliveira has since made aware that he would like to fight a top five opponent and that he knows a title shot is unlikely right now.

In the fight, Oliveira kept a rigorous pace from the jump and never let his foot off the gas in route to his UFC record 14th submission. The bout had several scrambles on the ground, but Oliveira continued to be dangerous even off of his back.

The Brazilian, Oliveira attempted numerous submissions throughout the fight, but it was the guillotine that earned him the finish in the first minute of the third round.

There is no doubt that another victory will grant Charles Oliveira a chance at the lightweight belt. Currently, Conor McGregor and Justin Gaethje are the only top five lightweights without opponents.

For Kevin Lee, this was a very disappointing result. Obviously Charles Oliveira is a tough night out for anybody, but a big opportunity was missed last night for Lee.

It was a difficult week for Kevin Lee in many aspects, from missing weight to fighting in an empty arena and then to losing. Afterwards, a distraught and emotional Lee said it might be a few years until we see him fight again as he needs time to fine-tune some things.

Aside from the main event, surging Brazilian welterweight Gilbert Burns made quick work of UFC legend Demian Maia. Burns has stringed together back to back quality wins over Gunnar Nelson and now his idol Demian Maia.

Burns ended his octagon interview by calling out everyone’s favorite fighter, Colby Covington. It’s unlikely the UFC would give Burns the 2nd ranked welterweight in the world, but a big name fighter is definitely next for him.

Even though Moicano has previously fallen short when he’s faced the top featherweights, expect him to earn himself another chance very soon.

Not every Brazilian fighter left the empty arena with a victory though. Fan-favorite Johnny Walker lost by decision, in a fight where his opponent did a phenomenal job limiting his explosive strikes. Back to back losses is uncharted territory for Walker, we’ll see who the UFC gives their rising star next.

Brazilian flyweight contender Jussier Formiga also lost last night. Formiga had a difficult time on the feet against the powerful Brandon Moreno, but he struggled to take him down as well. Moreno successfully stifled the game-plan of Formiga, which earned him the decision victory.

All in all, UFC Brasilia: Lee vs. Oliveira will likely never be forgotten in the world of sports. No one really knew how this event was going to go, but in the end it was still mixed martial arts. The competition didn’t take any steps back, despite the lack of fans.

Stay tuned as the UFC plans to continue their upcoming events, despite the threat of the Coronavirus.