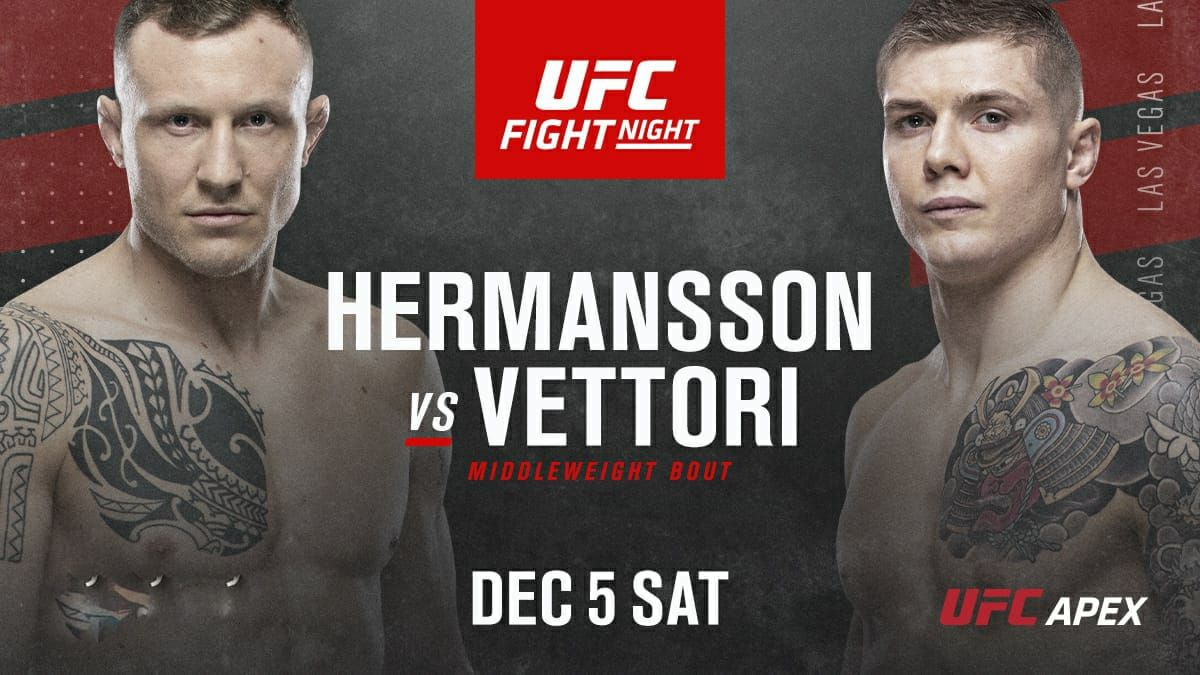 It was a bumpy road towards UFC ‘Fight Like Hell’ Night: Hermansson vs Vettori. The event’s middleweight headliner was altered twice—once by injury and once by COVID-19. Still, we’re treated to a hell of a night of fights.

UFC ‘Fight Like Hell’ Night features a middleweight clash between two men with their eye’s fixed on the belt. We’ll witness a classic veteran versus prospect match-up in Ovince Saint Preux—Jamahal Hill. The rest of the card assures to be packed with finishes.

Alexis Rodriguez: This fight has become quite the controversy in terms of the odds. Vettori is the favorite over the more experienced Hermansson. It seems that many are afraid of Hermansson’s chin and defense because of past losses. Considering he’s been finished on the feet by Thiago Santos and Jared Cannonier.

Vettori is riding more momentum off a loss than his three straight wins. Him giving Israel Adesanya a tough fight, in Izzy’s second UFC fight, has many feeling that he’s buzzing with potential. He’s a good striker, albeit without any knockdowns. He’s not the most potent striker, but his awkwardness meshes well with his strong grappling game.

MMA math seems to be the reason for Vettori’s rise in the odds; however, Hermansson is too good. His strengths are being overlooked and many forget that his most recent losses are to two top contenders in two different divisions.

Ryan Truland: First Darren Till, then Kevin Holland, and now Marvin Vettori. Credit Jack Hermansson for taking all in stride and accepting the circumstances. I truly believe that Vettori is an easier match-up for ‘The Joker’ than his first two scheduled opponents.

Hermansson has struggled against heavy swingers who pack one-punch knockout power (Santos/Cannonier). That’s not who Vettori is. ‘The Italian Dream’ brings relentless pressure and a well-rounded game, but not necessarily heavy hands.

I must be missing something here with the betting line. Is Jack Hermansson not the fourth ranked middleweight in the world? Has he not submitted the likes of Kelvin Gastelum, David Branch, and Gerald Meerschaerdt?

Easy pick for me here. Not because it’s clear-cut who’s going to win, but because of the better fighter being the underdog.

Alexis Rodriguez: OSP is the new threshold for prospects in the light heavyweight division. He’s more than capable of beating inexperienced fighters who need more seasoning. Hill will look to break the mold that many have failed to do against OSP.

OSP is the fighter we all know him as. He’s a southpaw with a bomb of a left hand and a sneaky left high kick. He’s a good wrestler who’s not aggressive with some credentialed grappling to boot.

Hill is a fundamentalist. His punches are straight and crisp. His kicks are sound, and he uses the jab the way it should be used—to set up everything else. He’s going to need that jab in this one.

OSP’s experience will be the deciding factor in this one. It may not be the prettiest performance, but he’ll get it done.

OSP has success against these young fighters because he knows how to utilize his experience advantage. He’s a very clever fighter.

These are two big, athletic light heavyweights—both men standing at least 6’3″. I don’t think Hill is going to throw anything that surprises OSP. I also don’t see him besting the vet on the mat. Thus, give me the underdog again.

Alexis Rodriguez: This has the potential to be a performance-worthy bout, considering Jaynes loves to start fast. Benitez is coming off two losses; meanwhile, Jaynes is coming off a submission loss.

Jaynes may be at a disadvantage in terms of height and reach. Benitez should use this and grind out a decision in what will possibly be fight of the night.

Ryan Truland: This one will be close in my opinion. Gabriel Benitez has struggled to sustain success since entering the UFC in 2014. Still, the guy comes to fight each and every time. If he comes out more measured this weekend, he may leave with a win.

Meanwhile, Justin Jaynes is (1-1) in the UFC. The guy has finishing power in his hands though. He slept a veteran, Frank Camacho, in the opening round of his promotional debut.

I think this one will contain some wild exchanges. I see Jaynes coming out on top in said exchanges to secure the finish.

Alexis Rodriguez: Both may seek out a grappling-heavy match here. De La Rosa is the better wrestler; at least on paper. However, Santos appears to be the stronger fighter. She also has powerful strikes and some solid Muay Thai. That may be enough for her to try and strike.

De La Rosa will definitely threaten to takedown and may score one or even two rounds. Yet, Santos will use her own experience and strength advantage to get up and force the striking.

Ryan Truland: It’s crazy to think that De La Rosa is still just 25 years old. She has far more experience than the slightly older Santos (27). An interesting note for this match-up is that De La Rosa has the edge in common opponents.

I think De La Rosa will come out with a sense of urgency that she has to win this fight. Yes, Santos is strong and she has weapons on the feet. Still, I envision De La Rosa grinding out a grappling decision win. Simply put, she’ll score more points with takedowns and her ability to keep her down.

Alexis Rodriguez: This is a great main card-starting fight. Evloev is a tremendous wrestler because of his athletic ability. It’s his bread and butter. Meanwhile, Landwehr is an M-1 veteran who overwhelms until his opponent cannot continue.

It’s a striker versus grappler match-up; yet it seems much more nuanced than that concerning the talent involved. Landwehr has the capabilities to make this a difficult fight; however, Evloev’s athleticism will be too much. He will score enough takedowns and offense to take a decision.

Ryan Truland: Ok, I’ve picked four straight underdogs and I want to pick another to complete the full sweep. I’m not going to though. Landwehr is good and he’s willing to risk it for the reward. Movsar Evloev is really good though.

The unbeaten Russian will be unfazed by Landwehr’s gimmicks. There will be an evident grappling disparity early and often in this one. The line is what it is for a reason.

Make sure to tune in tomorrow for UFC ‘Fight Like Hell’ Night: Hermansson vs Vettori. Prelims begin at 7:00pm (ET) with the main card kicking off at 10:00pm (ET), both on ESPN 2.