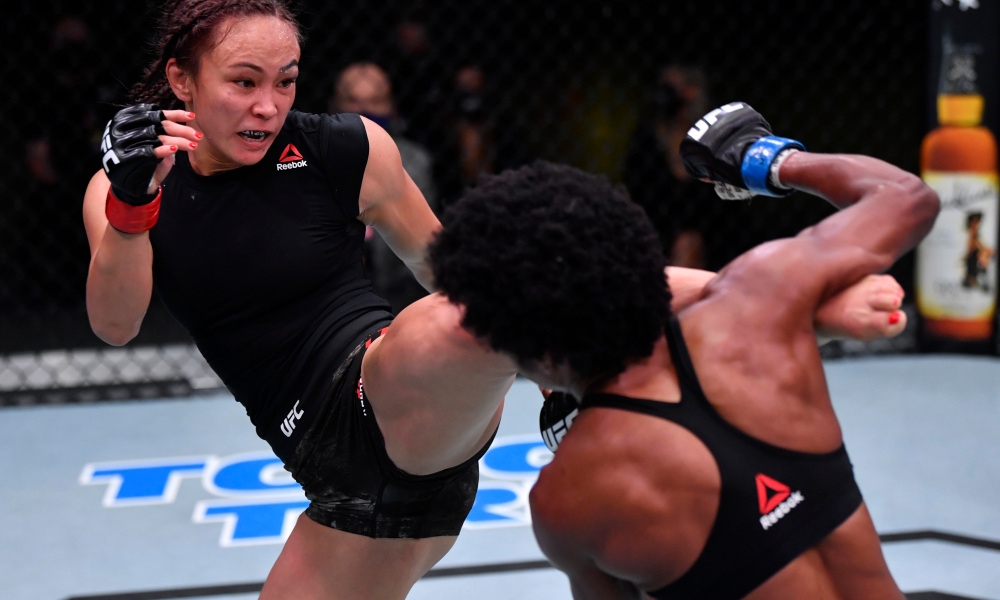 Michelle Waterson and Angela Hill delivered in Saturday’s headliner, capping off an action-packed night of fights. Overall, UFC on ESPN+ 35 surpassed expectations, despite there being a couple unfortunate moments.

We’ll start with the fun before moving along to the wacky elements of this past weekend’s event.

Michelle Waterson and Angela Hill made the most of their main event opportunities Saturday night. Originally, the event was supposed to be headlined by Thiago Santos and Glover Texeira, but it was scrapped after the latter tested positive for COVID-19.

Many people, including myself, questioned whether or not these two strawweights were worthy of a main event slot. We got our answer; and overwhelming YES.

‘Overkill’ Hill did what she does best and that’s push the pace, never letting her foot off the gas. Meanwhile, Waterson hung in there early and was able to force the fight to be fought at her preferred distance in the later rounds.

It was 2-2 heading into the final round on most viewer’s scorecards. The decision went in favor of the ‘Karate Hottie’, but neither woman lost Saturday night.

Hill has fell victim to a couple close decisions, but she’s at the top of her game right now.

Waterson likely earned herself a top five opponent in her next bout after edging out Hill.

Alright now for some wackiness.

Jalin Turner dominated his fight versus Brok Weaver from start to finish by utilizing both his speed and length advantages, but that’s not the weird aspect of what went down.

Turner dropped Weaver for the second time in the fight with about 80 seconds left in the second round. The ‘Tarantula’ walked away while his opponent laid dazed on the canvas.

The only problem was, referee Herb Dean never stopped the fight.

Weaver eventually made it back to his feet, but never really had a chance. Herb Dean should’ve called the fight once Weaver was seeing stars after eating the right hand.

Turner was able to work to a rear naked choke and the victory just moments later.

Two fights later, the biggest underdog on the card scored a flawless first round finish.

Kevin Croom defeated Roosevelt Roberts in the very first round after dropping him and locking up a guillotine choke.

Croom entered his UFC debut against a solid prospect in Roberts, and he handled it like a veteran. ‘The Hard-Hitting Hillbilly’ surprised Roberts to say the least.

Just fifteen seconds after they touched gloves, Croom caught the (-600) Roberts with a clean right hand. That was the beginning of the end for ‘The Predator’, but solely the beginning for Kevin Croom.

I’m still a fan of Roosevelt Roberts’ skills, but hats off to Croom for his flawless debut.

The strangest thing that occurred Saturday night took place on the main card.

Where do we even start with this one? I guess we can start with the fact that Mike Rodriguez won this fight and it’s a shame what happened. No reason to fault Ed Herman though because he just did his job.

‘Slow’ Mike landed a crippling knee to the body towards the end of the second round, causing Herman to fold to his rear. Referee Chris Tognoni stepped in as expected, but not to stop the fight.

He called a “low-blow” on Rodriguez and allowed Herman five minutes to recover. I understand that things happen fast inside the octagon, but it was an inexcusable call by way of Tognoni.

The long-time veteran Ed Herman worked to a submission finish in the final round to defeat Rodriguez. The camp of Rodriguez has expressed their intention of appealing the loss; an appeal which they should certainly win.

‘Slow’ Mike as looked better than ever in 2020 and that carried over into Saturday night. Unfortunately, it didn’t result in a victory.

UFC on ESPN+ 35 featured a main event in Waterson/Hill that surpassed expectations and an upset nobody saw coming. It also included two referee mishaps; one that might cost a fighter an earned victory.

Big Blue Report: Week One Against The Steelers!
Steelers Prevail Over Giants In Opening Night Win