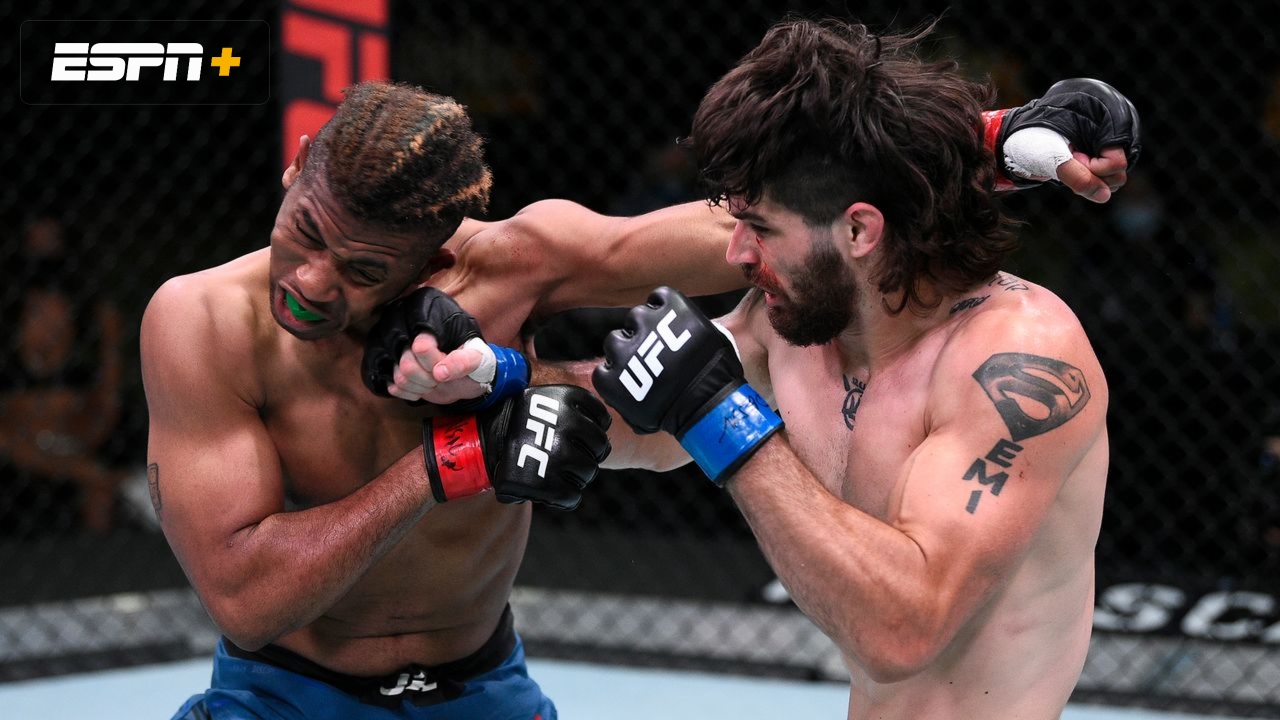 Back Sports Page’s MMA team returns this week for another edition of staff picks. This time we’re selecting who we believe will win this Saturday at UFC on ESPN+ 36: Covington vs Woodley.

Myself and Alexis Rodriguez predict who we think will come out on top in the grudge match between former teammates Colby Covington and Tyron Woodley; as well as three others on this stacked UFC Fight Night card.

Alexis Rodriguez: This fight is interesting. Woodley is coming off two demoralizing losses to Usman and Burns; while Covington is coming off his own loss to the champ in a back n’ forth brawl.

His jaw was broken and he ended up getting finished, but he showed grit. Woodley has been the complete opposite. He has circled and fought against the cage which left him vulnerable to pressure and wrestling. Thus, it should be an easy fight for Covington, but Woodley still has that power.

He also has good wrestling, but is it enough? Will he give up if he gets taken down? Is Covington the same after his war with Usman? He was brutalized at the end.

Covington’s style will be too much for Woodley. If Woodley can find a way to steer from his recent ways, then his chances skyrocket, but that remains to be seen.

Ryan Truland: The former welterweight champion has lost his last 10 rounds if you consider his previous two bouts. He just hasn’t been the same since finishing Darren Till in Sept. 2018.

On the opposing end, Colby Covington has proved himself worthy of competing with the best of the best at 170lbs. His dominant performance over Robbie Lawler opened a lot of people’s eyes to just how good this guy is.

Woodley has a serious chance if he decides to let his hands go; which he has promised he will do this time out. Both men can go a full 25, both are high level wrestlers, but only one has demonstrated finishing ability and that’s Woodley.

There’s no doubt that Covington will outpoint Woodley from start to finish, so if T-Wood can’t find a finish he’ll lose by decision. No respect will be gained after this one and Woodley will have to prove me he still has that killer mentality before I pick him over a guy as talented as Covington.

Alexis Rodriguez: This one will depend on which ‘Cowboy’ shows up. Will it be the hesitant ‘Cowboy’ or the engaging ‘Cowboy’? Price is coming off a brutal loss to Vicente Luque, and that loss could be the code ‘Cowboy’ uses against him: Thai boxing.

Price will stay in it as long as he can, and he may pull ‘Cowboy’ into a firefight or two.

Still, ‘Cowboy’ will show too much finesse and finish Price.

Ryan Truland: By the way these two men talked at the media day presser, I think both of them came here to throw the **** down! We are in for a real treat.

‘Cowboy’ is fighting for pride and to get back on track after losing four straight; albeit to top tier competition. Price is an absolute wild man and he can literally finish a fight from anywhere.

This will be a highly competitive contest because I think Price is stacks up well against ‘Cowboy’ at this point in his famed career. I really believe this one goes a full fifteen, but it will be action-packed for the duration.

Coin flip in my opinion, but I’ll take experience to prevail.

Alexis Rodriguez: Khamzat is riding a wave of momentum even though it was slowed down a bit by his visa issues.

Merrschaert feels slighted by Khamzat’s double booking, which could provide motivation. Although Khamzat hasn’t beaten any eye opening competition, his style will be too much for his opponent once again.

Ryan Truland: There’s a strange beef occurring between Khamzat and Meerschaert and it really boils down to the latter feeling disrespected. The feeling of disrespect stems from Dana White’s decision to book two fights for Khamzat (Meerschaert & Maia).

Meerschaert is a veteran and must be respected or he’ll be quick to surprise. The only problem is this time he’s facing one of the sport’s hottest young prospects, and a dangerous, dangerous man.

It’s difficult not to believe Khamzat when he says he’s going to “smash everybody”. I think he’ll continue the smashing this Saturday against Meerschaert.

Alexis Rodriguez: Holland has been very impressive lately; specifically with his power punching. He’s showed some improvements in his game, while Stewart, who’s coming off a victory, will look to get this fight on the ground.

Holland, however, will possess too much power and force the finish upon Stewart early.

Ryan Truland: Brendan Allen gave future opponents the formula to beat Kevin Holland, and that’s to get it to the mat. They call Darren Stewart ‘The Dentist’, but he’s no stranger to grappling.

Holland knows how to use his length so well and his strikes pack some heat as well. He’s a huge problem to deal with now that he’s improving his composure and decision-making inside the octagon.

I don’t envision Stewart wilting easily; in fact I believe he’ll keep it competitive for awhile before eventually taking too much damage from the bigger, faster Holland.

UFC on ESPN+ 36: Covington vs Woodley is live this Saturday! Make sure to check out the prelims at 5pm (ET) and the main card at 8pm (ET); both only on ESPN+.

This is one of the best Fight Night cards ever… enjoy.