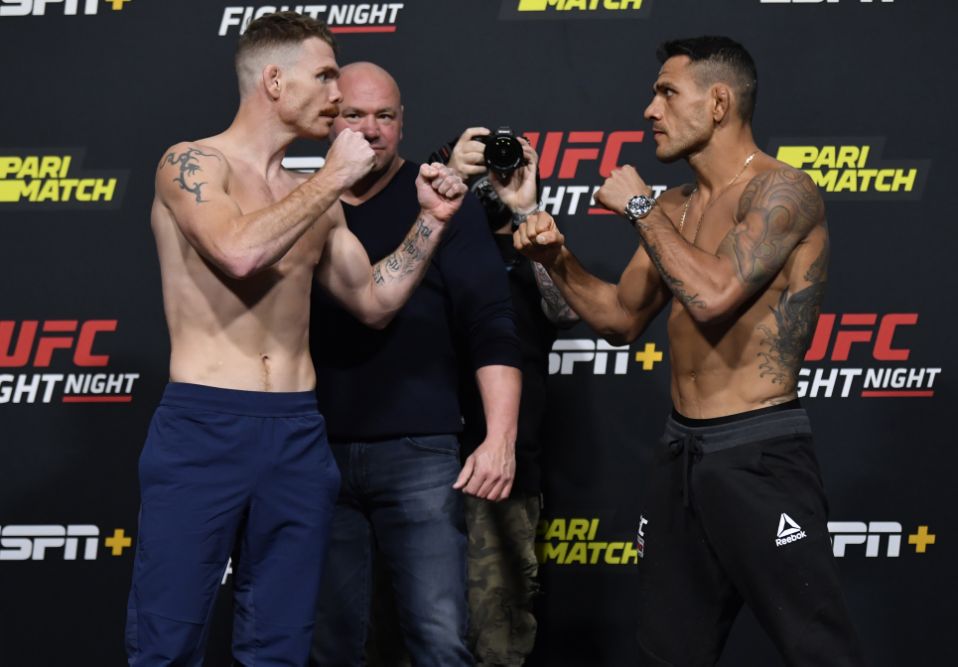 Back Sports Page’s MMA team returns for yet another edition of staff picks. It’s been a bumpy road towards UFC on ESPN+ 41: Felder vs dos Anjos. Nevertheless, it goes down tomorrow evening in Las Vegas.

Myself and Alexis Rodriguez have made our selections for the lightweight headliner. ‘The Irish Dragon’ Paul Felder welcomes a former champ back to the division in Rafael dos Anjos. Several other heavy hitters are set to compete at UFC on ESPN+ 41 as well.

Alexis Rodriguez: This is a great fight on paper because of the potential for fireworks. However, Felder took this fight on very short notice. It feels like that may be a huge factor. Dos Anjos has been preparing for a wrestler, and Felder’s style is much different.

RDA is an incredibly well-rounded fighter also, with an excellent ground game. His striking has improved significantly over the years and his pressure game has become his forte.

This is an entertaining fight, but Felder is taking this with only a few days of heads up. Dos Anjos will come out on top in a long, grueling fight.

Ryan Truland: First of all, thank you Paul Felder for saving the day and stepping in on five days notice. Second of all, thank you RDA for rolling with and accepting the circumstances. Now that we got that out of the way, lets discuss this fight.

Those close to Felder claim he’s been staying in incredible shape, which is why he was able to accept this short notice fight. I think the whole “short notice” thing is a tad overrated in this instance. That means we’re in for a heck of a fight.

One reason is because both these men come forward and neither gets finished often. RDA has been finished just three times in 29 UFC appearances–Felder just once in 14 showings.

The pick for me here is Rafael dos Anjos. Both guys have lost several times via decision. Unfortunately for Felder, he adds another to the column Saturday.

Alexis Rodriguez: Abdul Razak Alhassan is a true knockout artist. He looks for the finish rather quickly every time out. Williams can get finishes also; especially if Alhassan gets wild.

The wildness could benefit Alhassan though because of his power. This bout could steal the show, and Alhassan’s power may be too much.

Ryan Truland: Abdul Razak Alhassan is one of two Fortis MMA members fighting on Saturday’s card. He’ll hope to get back on track after falling to Mounir Lazzez in July. You can count on him pressing the action early, trying to make Williams uncomfortable.

His counterpart, Williams, will attempt to weather the early storm in order to drag the fight out. This fight is taking place at a catchweight due to Alhassan missing weight (172.5lbs); making me believe Alhassan will have a better gas tank than usual.

Alexis Rodriguez: Anders’s wrestling is going to be key in this fight. Arroyo should attack Anders’s legs with leg kicks to keep him at bay. However, if Anders is able to get in close or counter with his powerful left, then he should win this fight.

Arroyo seems to be the more polished striker, but Anders has that wildcard power. Anders has the experience as he’s fought some quality competition. Meanwhile, Arroyo just hasn’t fought the same level of opponents.

Anders will make this fight ugly and drawn out. He will clinch along the fence and take a decision.

Ryan Truland: I have a bit of a soft spot for the former Alabama linebacker Eryk Anders. He always comes to fight and has never backed down to superior competition. Sadly, he hasn’t put it all together yet. Weighing over the limit today at weigh-ins isn’t a good look either.

He takes on his most inexperienced opponent in years when he steps in against Antonio Arroyo. The former Contender Series pupil fell short in his debut last year. He has a big opportunity fighting Anders.

‘Ya Boy’ is going to get it done Saturday in emphatic fashion. Go place your bets now.

Alexis Rodriguez: This seems like your classic grappler vs striker match-up. Strickland is the more well-known striker and looks to bring an exciting fight.

Meanwhile, Allen is more of a grappler with a black belt in BJJ. He’s riding a great wave and is on the rise. On the other hand, Strickland returned from a two year layoff just two weeks back.

Ryan Truland: Aside from the main event, this is the bout I’m looking forward to most. Brendan Allen was scheduled to fight Ian Heinisch last weekend, but a positive COVID test scrapped it. Luckily, he was able to find a comparable opponent just a few days later.

Sean Strickland is a few weeks removed from putting a beating on veteran Jack Marshman. He looked the bet he’s ever looked, despite returning from an extensive layoff.

I see Allen having a strength advantage in the clinch/grappling department. Both guys will have their respective moments, but I think Allen eventually works to a submission on the ground.