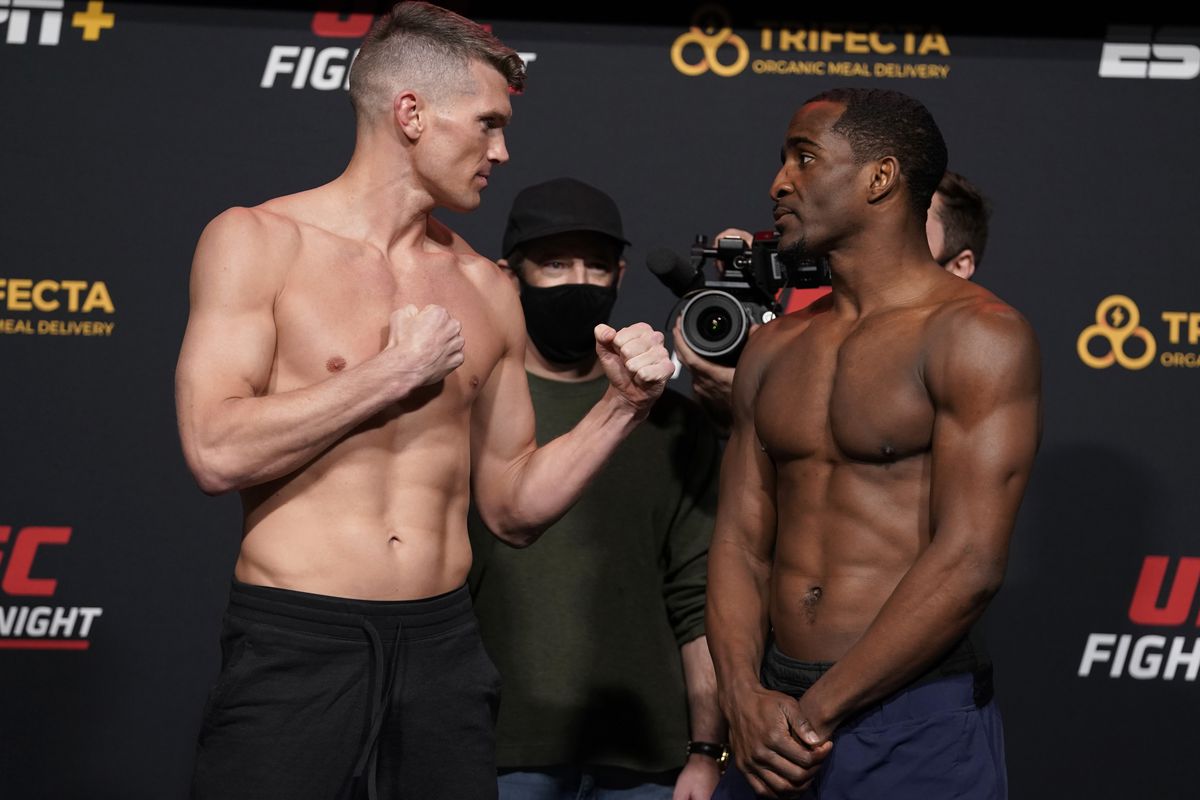 This weekend’s UFC Vegas 17 is serving as the year’s final card — and like many others, it’s suffered changes along the way. Luckily, the stage is set, the fighters have weighed in, and these are BSP’s UFC Vegas 17 official predictions.

Former title challenger Stephen ‘Wonderboy’ Thompson welcomes rising steamroller Geoff Neal in UFC Vegas’s headliner. Before that, Jose Aldo and Marlon Vera will be providing fireworks in the co-main event slot. The rest of the card is stacked, so make sure you tune in on ESPN+.

Alexis Rodriguez: No one in the welterweight division is on Wonderboy’s level in terms of striking — yet he’s not unbeatable. He’s been caught, dropped and knocked out. He’s also shown susceptibility to the right hand.

That is going to be Neal’s key. He has to set up the right hand and close the distance. Luckily, he’s a patient fighter with other tools. However, he is facing a near-perfect striker. Perhaps he could threaten with grappling to keep Wonderboy on his toes.

Wonderboy simply has to counter the way he always has and move. His counters are top-notch, but he can’t afford to get lackadaisical. Nevertheless, Wonderboy has too much experience, and that will be the difference. Neal will become better because of this fight, but he will not win it.

Ryan Truland: Lets not forget, Wonderboy looked very impressive in his last bout against Vicente Luque. He also fought a very good fight versus Pettis until the superman punch that cut his lights’ out. What I’m saying is Wonderboy still has some left to make a title run.

Geoff Neal is standing right in his way though. The Fortis MMA product has beaten, no finished, some really durable opponents (Niko Price and Mike Perry). He must close the distance to land his power strikes and make Thompson uncomfortable.

If you allow Wonderboy to pick you apart on the outside, he will dismantle you and eventually score a finish. He’s extremely motivated to prove that he can still compete with the best. He’s not a gatekeeper yet.

Alexis Rodriguez: This is going to be a back and forth affair. Aldo’s durability will be tested here because Vera won’t go down easily. Aldo will look to use his kicks and boxing to keep Vera at bay.

Meanwhile, Vera will look to get inside to land shots of his own. He must start fast though because he can’t afford to lose ground quickly in a three round fight.

Aldo has been around the block and he knows how to win off points and fight smartly if need be. I believe he’ll bring a calculated approach into this one to ensure the victory.

Ryan Truland: I think Aldo will still have the speed advantage in this one. Really, I see that as being the difference. There’s no doubt that Vera deserves this opportunity as a veteran who has worked his ass off.

This fight will be spent entirely on the feet where Aldo has both speed and power over Vera in my eye’s. The ex featherweight champ has dropped three straight and is desperate need of a win. At the same time, Vera is looking to prove he can compete with top ranked competitors.

These two are going to meet in the middle and trade devastating blows until somebody goes down. The difference, Aldo will be at him to the punch — pun intended.

Alexis Rodriguez: Can Pereira avoid the power of Williams? That is all that this fight hinges on. Pereira is a great athlete with some great tools on the feet, but he tends to do too much. He did show more patience in his last bout, but he still must do everything to avoid the unrelenting power of Williams.

Khaos Williams has hardly surpassed a minute inside the octagon over his first two fights. He’s facing someone who’s considered to be more well-rounded in Pereira.

It won’t be easy going against Williams” power, but I think he can withstand to secure the win.

Ryan Truland: Michel Pereira has NEVER faced anyone with power like Williams has. That fact will have Pereira entering this bout more focused than his previous bouts. Still, that might not matter at all.

People don’t flatline Alex Morono and Abdul Razak Alhassan the way Khaos Williams did this year. ‘The Oxfighter’ has a different kind of power — a special kind.

Pereira will try to chop him down at the legs early to negate some power, but I don’t see it being enough. ‘The Oxfighter’ will make even more noise in 2021 after defeating Pereira.

Alexis Rodriguez: Moraes is looking to get things back on track after the Sandhagen loss two months ago.Meanwhile, Font who has won two straight, is fighting a after a year off and he gets a huge step up in competition.

Font is a good boxer with smart technique. He’s not particularly skilled in one facet nor distance, but he throws smart punches and mixes it well with wrestling when necessary.

On the other hand, Moraes is a kickboxer through and through. He throws vicious leg kicks, body kicks, and head kicks. That establishes his rhythm. Without landing his kicks, he’s lost. Font must eliminate those to make Moraes uncomfortable. I see Moraes inflicting more damage of the two in a back and forth contest.

Ryan Truland: I hope people haven’t forgotten how good ‘Magic’ Marlon Moraes is. Remember how he absolutely ran through Henry Cejudo in the first round before emptying his gas tank? He’s essentially lost three straight when throwing in his split-decision W (L) over Aldo. Still, the guy is a firecracker with his striking.

Rob Font has been away for a bit, but he’ll still carry with him the same durability he always has. Perhaps he’ll return looking better than ever — similarly how Ortega did against Korean Zombie. That could be wishful thing though.

I think these two will be competitive. Moreover, I don’t see either going down before the final bell.

Alexis Rodriguez: This is an interesting match-up. On paper, they’re almost equals with Morono also being a black belt in Taekwondo and BJJ. Pettis holds black belts in both as well, so it seems like this is a toss up.

The way they use their styles is very different though. Morono is a good striker with nice power, but he can’t mix it up as well as Pettis. ‘Showtime’ is known for his array of weapons — keeping fighters guessing on their feet. His ground game is often overlooked, but it shouldn’t be.

Morono will be in this fight, but Pettis will just have a little too much for him.

Ryan Truland: This opportunity that Morono is looking to capitalize on is similar to the one Vera is receiving in facing Aldo. A win, and he’s beaten a viable former champ, which will likely put him in the rankings. A loss, and he’ll be knocked a few notches back down the ladder.

Is it possible that Anthony Pettis is fighting for his job? Well, he’s on the final fight of his current contract, he’s lost two of his last three, and Dana says he trimming fat. Put it together. If Pettis falls to Morono, I believe it may be his last UFC bout.

Good luck finishing Morono, unless your name is Khaos Williams. Simply, Pettis doesn’t have the power to flatline Morono. He could catch him clean with something wild, but Morono is a veteran too.

UFC Vegas 17: Wonderboy vs Neal is LIVE later today on ESPN+. Tune in for the stacked prelims at 4PM (ET) and the blazing main card at 7PM (ET). Place a couple wagers using BSP’s official predictions and hopefully win some coin.

Can Stephen Thompson Make Another Run for a Title?
Top 5 AEW Matches of 2020