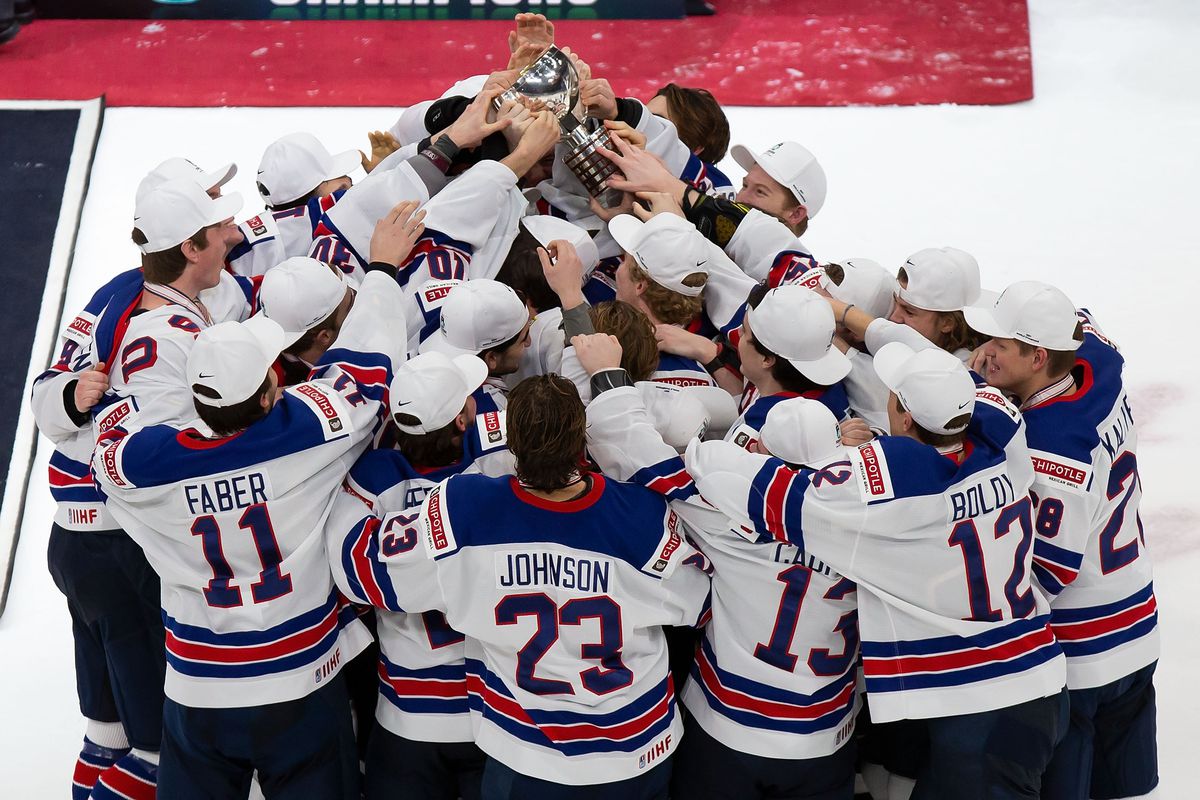 Sporting the retro-style 1980s Olympic themed jerseys, the 2021 U.S. World Junior team pulled off a miracle of their own: beating a Canadian team that was heralded by many as one of the best World Junior teams ever. Despite facing a team with 19 first round draft picks that hadn’t ever played from behind or allowed a five-on-five goal, the Americans shut out the Canadians by a score of 2-0. When the final buzzer sounded, elation filled the arena as American players piled on one another, celebrating an accomplishment only achieved by four other United States World Junior teams.

The U.S. came out in the first period firing on all cylinders. After a dominant few minutes, Trevor Zegras passed the puck up to defenseman Drew Helleson, who fired a wrister towards the net; Alex Turcotte redirected the puck with precision over Canadian goaltender Devon Levi’s shoulder and into the net. It was the first goal Canada had allowed since the preliminary round. From there, the United States pressed even harder, outshooting the Canadians 12-9 and playing much of the period in the Canadian defensive zone.

The United States continued that momentum into the second period, scoring just 32 seconds into the frame. A lucky bounce off the back off the back of the net saw Devon Levi lose track of the puck, and Trevor Zegras, who would later be named tournament MVP, took advantage, netting the Americans’ second goal of the game. Canada wouldn’t go down without a fight, however. A big penalty kill of the tournament’s best power play energized the Canadians, and they began their push. After struggling to find consistent offensive zone pressure and successful forechecking prowess, things started clicking, and the Canadians began turning up the heat. Goaltender Spencer Knight was up to the task, however, as were the United States’ defense.

With blocked shots, physical play, and smart puck decisions, the United States bent a little, but didn’t break. Despite a third period that saw the Canadians outshoot the Americans 15-1, the United States’ defense stood tall. Knight would go on to stop all 34 Canadian shots, and made several acrobatic saves, including this one with just over two minutes to play. When the final buzzer sounded, flashes of red, white, and blue piled onto the ice, celebrating one last victory that would be the sweetest of them all.

As the American flag rose high to the rafters, off-tune shouts of The Star Spangled Banner filled the arena, as gold medal clad players linked arms and swayed to the music. When the anthem concluded, the Americans gathered, players and staff alike, for one last championship picture, throwing up “number ones” and smiling ear to ear, knowing that tonight, they were the greatest hockey team in the world.

Congratulations to the United States’ players and staff!