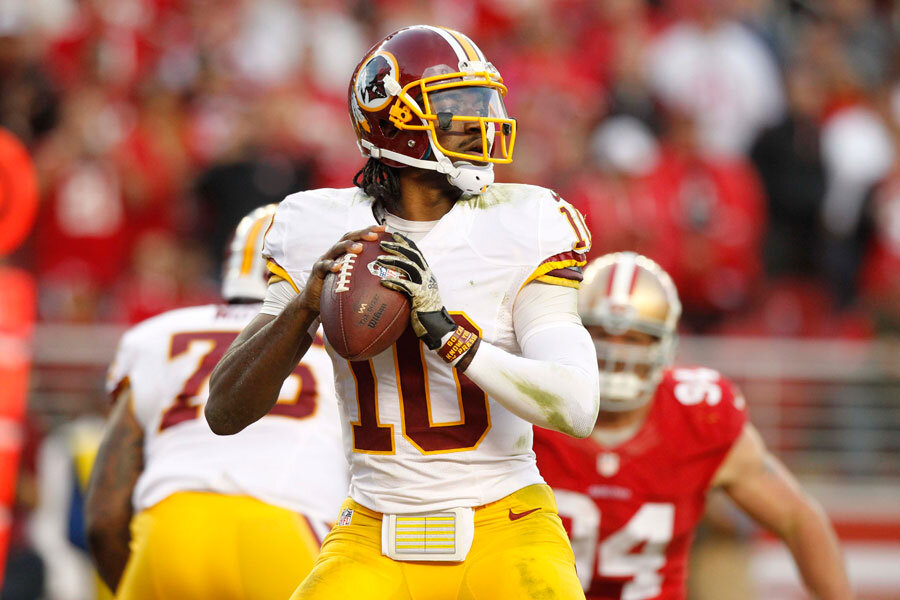 Last time on Untapped Potential we dove into the career of Johnny Knox and the potential he wasn’t able to reach. Today, we are going over one of the most dynamic players the league has seen in recent history, Robert Griffin III.

Welcome back to Untapped Potential Robert Griffin III or better known as RGIII, played for the Baylor Bears from 2008-2011 where he made his name. His first year at Baylor he was immediately the starter for a struggling university who finished 0-8 in conference play the year prior. His freshman year was solid and it even earned him the Big 12 Offensive Freshman of the Year award. He showed flashes of his potential and year two was expected to be an improvement. However, in the third game of his sophomore season Griffin would suffer a tear in his ACL, the first of Griffin’s knee injuries. This injury granted him an extra year of eligibility after he was redshirted for his sophomore season. Griffin would return to his starting role a year later and would finish with 22 touchdowns to 8 interceptions. RGIII was also deadly on the ground as he finished with over 600 rushing yards and 8 rushing touchdowns. For Griffin, this season was the beginning of something special.
Entering the 2011 season Griffin and the Bears were actually not projected to finish well, but they got hot right out of the gate against TCU in a 50-48 score. Griffin’s dominance of the NCAA in 2011 began here as he threw for over 350 yards and 5 touchdowns in the Bears upset win over the Horned Frogs. Griffin and the Bears would carry their confidence earned in this game the rest of the season. 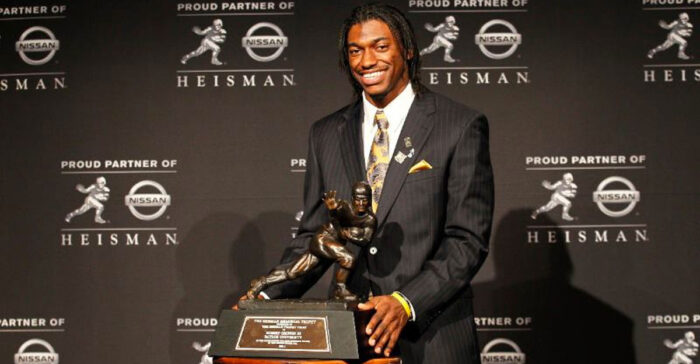 RGIII would have many standout performances throughout 2011 which was only raising his NFL Draft stock. For example, in Baylor’s first of three losses on the year to Kansas State, Griffin threw for 346 yards alongside 5 touchdowns and 1 interception. While Baylor may have lost Griffin’s draft stock began to tick upward and his performance helped enter his name into the Heisman race early on. Later in the year, Griffin led the Bears to a 34-21 victory over Oklahoma. He threw for 479 yards and four touchdowns in route to Baylor’s 7th victory on the year. At this point in the year Griffin was right in the thick of the Heisman race. Performances like Griffin had against Oklahoma had NFL scouts drooling over the potential RGIII had.
Griffin would finish his final college season with over 4200 yards as well as 37 touchdowns and 5 picks. On the ground, Griffin racked up 699 yards and 10 touchdowns making him almost impossible for opposing defenses to stop. RGIII’s stellar season earned him the Heisman trophy that year over the likes of Andrew Luck, Trent Richardson, and even Tryann Mathieu. His Heisman victory only further helped his draft stock, but despite the award he was still slightly behind Andrew Luck in draft projections. Robert Griffin III was drafted second overall in the first round of the 2012 NFL draft by the now Washington Commanders. Griffin was drafted just one spot behind Stanford Quarterback Andrew Luck who was selected by the Indianapolis Colts. Griffin would head to Washington after the team traded up with the St. Louis Rams to get him. Immediately, Griffin bred life into this team. First career starts are always difficult but Griffin didn’t let that bother him. He threw for 320 yards and two touchdowns as well as a 73% completion percentage. Right off the bat Griffin showed what his potential could be leading the Commanders to a 40-32 victory to the New Orleans Saints.
Allowing 32 points to New Orleans was a sign of things to come for this Washington team. They would enter week 7 at 3-3 having given up more than 30 points in three of those games. Then, the Commanders would go on a 3 game skid, scoring less than 13 points in 2 of those games. Griffin would play decently but his 4 turnovers in that 3 game slide didn’t help their winning chances. Entering week 10, RGIII and the Commanders sat at 3-6 on the year. That’s when things turned around. The Commanders would go on to thump the Eagles 31-6 behind 4 passing touchdowns from Griffin. This game was the spark this team needed as they would go on to win their next 4 games led behind Griffin with the exception of week 14 against Cleveland as RGIII was inactive for the game. It’s important to note, Griffin missed that game due to a LCL sprain in his right knee, a possible sign of what would later happen.
With just one game left to go, Washington entered the final week of the season in a winner takes the division title game against the Cowboys in primetime. Griffin would have one of his weaker performances, only amassing 163 total yards and just a 50% completion percentage. Led behind Alfred Morris and the Washington run game, the Commanders would prevail, securing their ticket into the playoffs with an improbable season comeback. Washington made the wild card round giving them a game against the 11-5 Seattle Seahawks, led behind rookie quarterback Russell Wilson. Early on in his first playoff game RGIII looked calm and composed. The first drive of the game he helped lead Washington downfield with a couple key passes. One of those passes would help finish off the drive with a touchdown as Griffin threw to Evan Royster who would only catch that pass on the day. Washington’s defense made a stop and the ball was once again back in Griffin’s hands.
Griffin led Washington down the field again scoring another touchdown pass to put the Commanders up 14-0 early in this game. The way this team fired off and the way RGIII had handled his first playoff game up to that point showed the potential he and this team could have in the long run. Unfortunately, Washington stalled and would only hold the ball for 3 more minutes the rest of the half after a punt and interception.
The second half started with 3 straight punts despite a Seattle fumble to start the half. Both teams traded punts until Seattle eventually scored a touchdown and a 2 point conversion to go up 21-14 with seven minutes left in the 4th. Washington got the ball back and on first and ten Griffin was sacked for a loss of 12, bringing up a second and long. With the pressure on, Griffin lined up in the shotgun looking for a big gain. Once the ball was snapped however, everything went awry. The snap was too low and off center forcing Griffin to turn to the ground to gather the loose football. When turning, Griffin would immediately fall to the ground in pain and it was later ruled he had suffered an ACL and LCL ligament tear. He was out for the game bringing in backup Kirk Cousins. Washington ultimately lost the wild card game but Griffin’s injury would be the talking point of this game. Griffin would return by Week 1 of the following season hoping to bring even greater heights to Washington and further back up last season’s run. Despite Griffin’s best efforts however, Washington started the season 0-3. In those games, Griffin had thrown the ball over 40 times in each one, and over 49 times twice. Most notably, Griffin was running the ball way less than before his injury. He also was completing way less passes compared to his rookie season.
Washington would continue to fight until the wheels seemingly fell off come week nine. A 27-34 loss despite a 250 yard, 3 touchdown day from Griffin would start a season ending skid for Washington. They would lose out the rest of the year. Those losses made head coach Mike Shanahan desperate for wins in order to keep his job come season’s end. Shanahan would shut Griffin down for the rest of the year citing the benching was for Griffin’s “long term health.” RGIII would finish the season with 3200 yards, 16 touchdowns, and 12 interceptions. Griffin’s completion percentage was a mere 60%. Griffin was poised for big things this season but looking back, his injury may have been a lot to overcome. 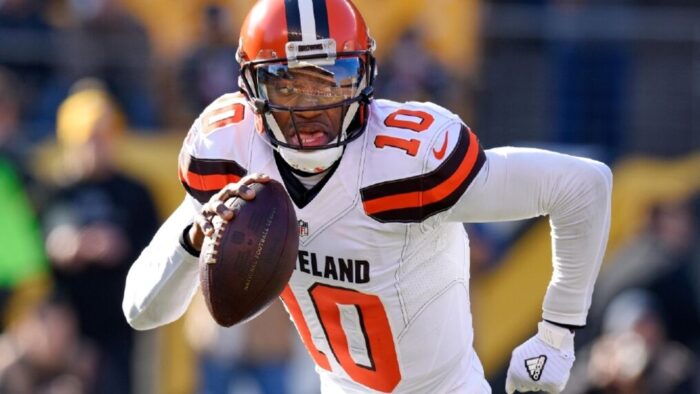 Griffin would return healthy again to start the 2014 season for Washington. However, come week two Griffin suffered a dislocated ankle that would sideline him for the coming weeks. He would return week nine against Minnesota but did not look good. Griffin would be benched just 3 weeks later after throwing 2 touchdowns and 3 interceptions in consecutive losses for the Commanders. He would return a few weeks later but he just didn’t look the same. His electric rookie season was a thing of the past and the reality had set in.
In 2015 Griffin would only appear in the preseason where he would suffer a controversial concussion. He would not make an appearance in any regular season game sitting behind Kirk Cousins. Washington would cut Griffin come season’s end, moving on from the former Heisman trophy winner and second overall pick.
Griffin would sign a two-year deal with Cleveland looking for a fresh start. However post week one Griffin was placed on injured reserve with a dislocated shoulder. The injury would keep Griffin out until week 13. Upon his return, Griffin and the Browns would go 1-3 with Griffin totaling 5 turnovers over that timespan. The Browns would cut Griffin in the offseason, leaving him without a team entering the 2017 season. RGIII would remain a free agent for the entirety of the 2017 season before returning to be a backup for the Baltimore Ravens. Griffin would only appear in three games and all were very brief. He was only active for four games in 2018. It appeared Griffin would be a capable backup/third stringer for teams, but that’s all he was amounting to.
He spent 2019 as the Baltimore backup and actually appeared in six games that season. This Ravens team was stout so Griffin’s appearances all resulted in wins. That being said, Griffin’s performance when he did play was below average. He finished the year with 1 touchdown and 2 interceptions as well as 225 yards passing.
2020 saw more of the same for Griffin being the Ravens backup once again. He barely appeared in any games for the team that year, having only one game with more than two pass attempts. In a week 12 game against Pittsburgh, Griffin’s most action of the year, he suffered a hamstring injury that would ultimately put him on injured reserve. That week 12 game against Pittsburgh would be the final game RGIII appeared in for his career.

Where is he now? Griffin is now a commentator/analyst for ESPN but has stated as recently as July that he is open to a NFL return. Despite being 32 years old, the story of RGIII on the field might not be over. Whether it’s over or not, that doesn’t change the fact that Robert Griffin III was an electric player the moment he came into the league. He was poised to have a great career in the NFL and had everything gone as planned, he would probably still be in Washington today. But, after the tear in his knee Griffin’s rookie year, he was never the same player. It’s an unfortunate ending to what could have been a great career and it leaves us wondering what could have been?