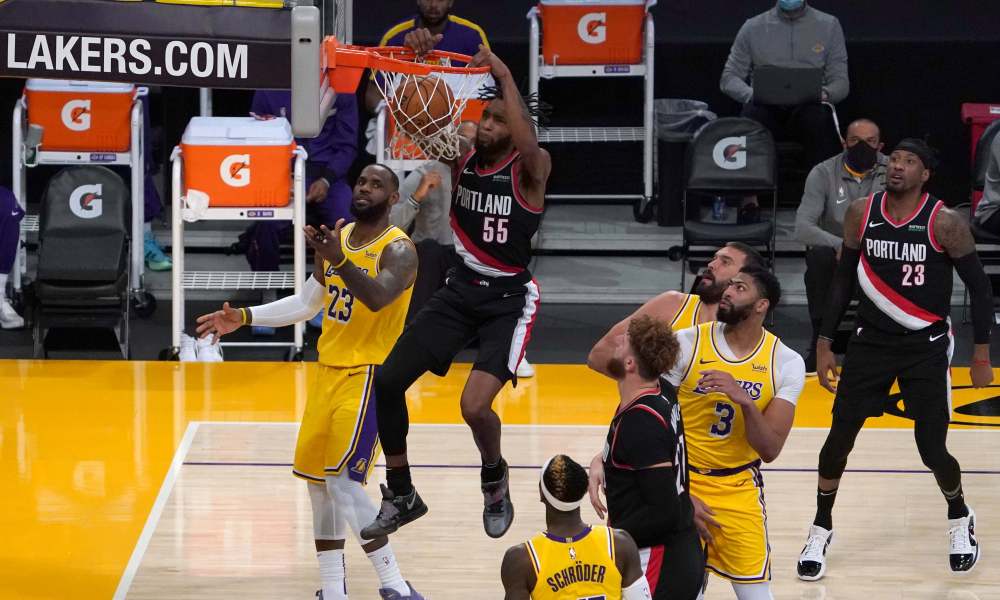 The Los Angeles Lakers were defeated by the Portland Trailblazers 115-107 Monday night. This is the first meeting between both teams since their playoff matchup in the Bubble where the Lakers would win 4-1. Head Coach Frank Vogel continues to ponder on which line ups are most effective for this team.

Right from the bat, the Lakers looked as if they were ready to showcase another dominating performance. However after the team’s hot start in the first quarter, they came down to Earth and began to look regular again. Though the Lakers had spurts where they showed their potential, there were some rough patches that come along with it.

“I thought we came out with great energy,” Frank Vogel said. “we sort of jumped on them and built an early lead. We just weren’t able to sustain it. Portland is a very good team, they made their counters with their energy and made their runs.”

Off Night for AD

After sitting out Sunday night’s game with a calf contusion, Anthony Davis suited up to play against Portland. Despite returning back to action, Davis was not that effective in Monday nights action.

The All Pro had a below average night with 13 points, 10 rebounds and five assists in his return. Portland’s gameplay for AD worked the entire night as he was held to season lows in attempts (14) and field goal percentage (42.9). Not to mention that he did not attempt one three pointer. Head Coach Frank Vogel has been vocal on wanting Davis to shoot from five to seven threes a game.

Just as in the bubble, Gary Trent Jr. showed why he is rising marksman in the NBA, scoring 28 points and shooting 7/11 from behind the arc. Trent Jr.’s seven three pointers marked his career high in made threes for a game. The Lakers had a first hand look on how much of a threat Trent Jr. is from the three as he shot 42% from downtown against them in last season’s playoffs.

To go along with Trent Jr.’s performance, Damian Lillard (31 points) and CJ (20 points) McCollum also came to play as the duo combined for 51 points. Lillard scored 21 of his 31 points in the second half. It seems like a repeat of last years game one in the first round. All three players would be lights out from behind the arc and hit clutch shots to keep a distance from the Lakers.

Just as last season, the Lakers are looking for the right lineup to close out games. With new pieces coming in this off-season, Vogel has to go back to the drawing board and figure out who he will put out there with LeBron James and Anthony Davis.

“We’re a new team so we’re going to continue to look at new things,” Frank Vogel said. “We can play with Markieff or Trez (Montrezl Harrell) finishing, we have the ability to move AD to the five. I liked the lineup we had out there but just weren’t able to get the job done.”

If last night’s game showed anything, it was that Vogel is still experimenting what this team can/can’t do. Vogel could have easily went for the win by sliding AD to the five and inserting Markieff at the four to guard Covington, instead he opted to Montrezl Harrell. In spite of this, these are games that he has to use to see what works best in the long run.