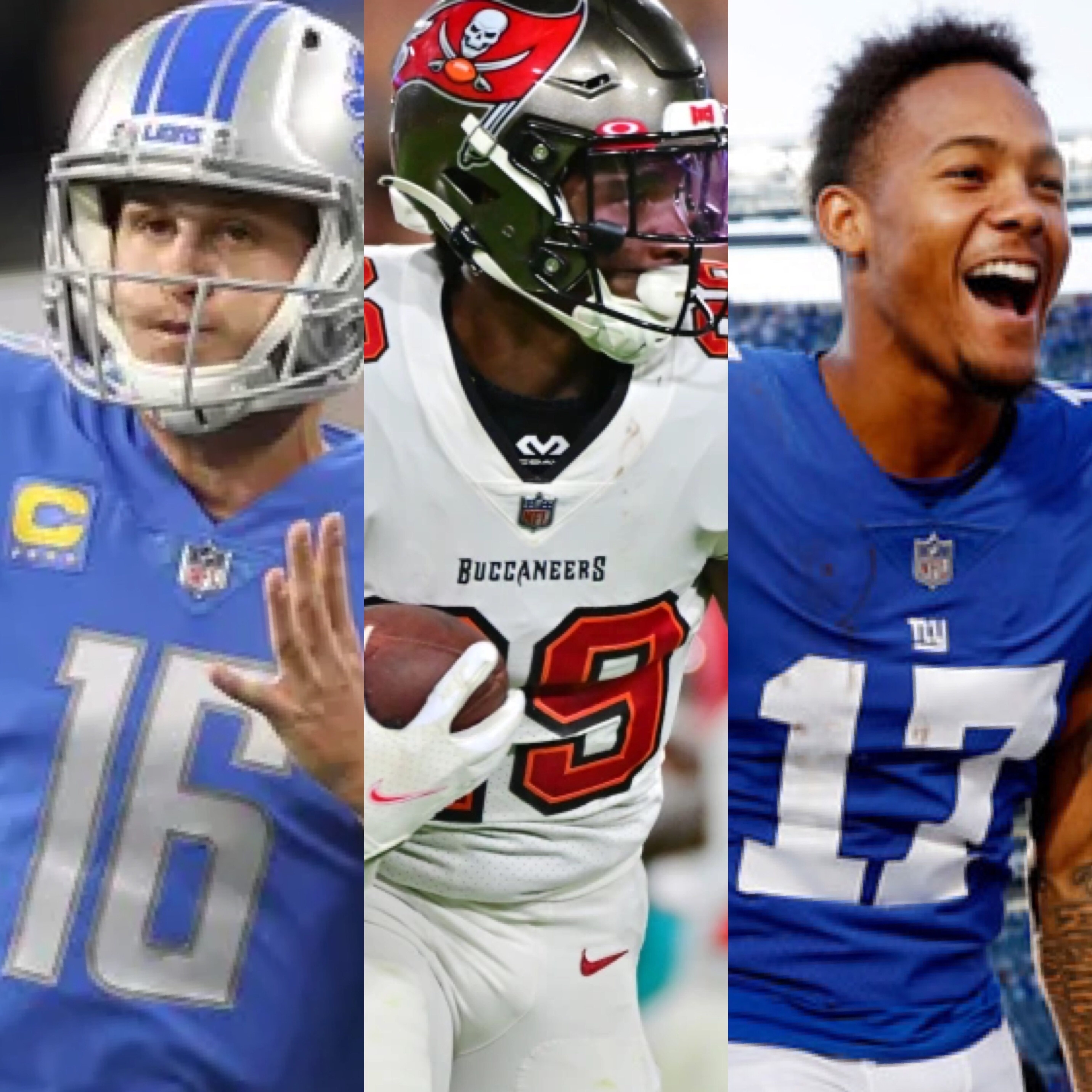 Navigating the waiver wire is one of the keys to fantasy football success. It is a necessity depending on whether you’re looking for a spot start or a season long pickup. Four teams with elite players are on a bye this week (Bills, Eagles, Vikings, Rams), so waiver wires are going to be attacked harder. As always, check who is being dropped. It could be someone you value more than who is available.

Fields has fallen under the radar due to averaging less than 20 passing attempts per game. A lackluster passing game and weak offense is usually a sign to stay away from this player. However, Fields is a master at the fantasy cheat code of quarterback rushes. Fields is third behind Lamar Jackson and Jalen Hurts in rushing attempts. This rushing game gives Fields a great baseline that can be boosted due to a rushing touchdown or passing touchdowns. This upcoming matchup for Fields could lead to fantasy greatness. The Patriots have the 5th worst rushing defense in the NFL and were torched by the rushing ability of Lamar Jackson. Fields has the ability to offer a nearly 10 point floor due to his rushing upside. -Anthony Yip 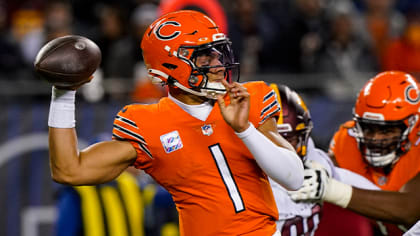 There is a good chance that Goff is available in your league. He had a poor performance in Week 5 and was on bye in Week 6. However, in two of the three weeks leading up to Week 5, Goff delivered a QB8, and most recently, a QB1 performance in Week 4. The matchup this week vs. Dallas doesn’t look the best on paper, but Detroit should be as healthy as they’ve been in quite a while. Stud WR Amon-Ra St. Brown and RB D’Andre Swift are expected back in the lineup. That should make the offense much more reliable. And with Dak Prescott presumably back (another one you need to be checking on if your league doesn’t have an IR spot), the Lions could find themselves in another one of their patented shootouts. -Ryan Stern

There is arguably no greater handcuff in fantasy football right now than Rachaad White. The clear #2 Running back on the team, White has had his usage increase as the season continues. If Leonard Fournette were to go down, White would have a stranglehold on the position. This potential opportunity mixed with a good offense is reason enough to stash White. This week does not feature a lot of plug and play talent. However, stashing White, especially if you have Fournette, could be a league winner. -AY

There are a lot of head scratching decisions being made in Denver this season. Javonte Williams was clearly the most talented RB in the Mile High City. Yet, he saw an inordinate amount of snaps go Melvin Gordon’s way. Now that Williams is out for the year, you would assume the lion’s share of opportunities would be handed to Gordon. This has been disproven over the last two weeks. In the Broncos’ Week 6 defeat to the Chargers, Latavius Murray out-snapped Gordon in the 2nd half 22-0. Mike Boone also found himself in on 9 snaps. Now, with the possibility of Russell Wilson missing some time, they will be relying on the running game even more. Murray is a must-add. -RS 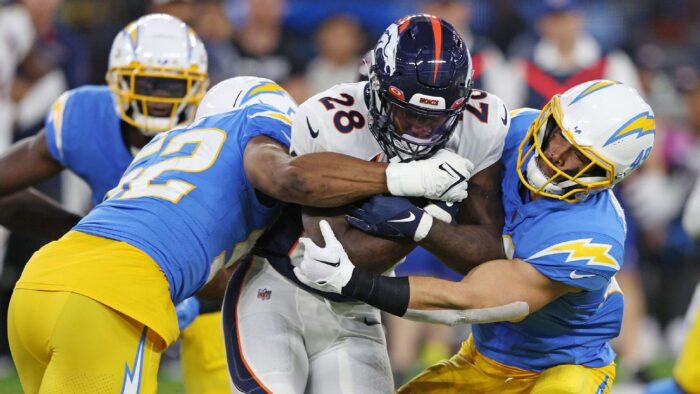 Latavius Murray trying to split defenders in his first game as a Bronco. Photo courtesy of ESPN.com

Robinson played his first game since his knee injury in Week 1. The rookie only played 16 snaps but was incredible on the field. He was targeted on 25% of his routes. This is an elite number that rivals top wide receivers in the league. He led the team in targets and has unknown upside due to his inexperience in the NFL. Rather than take a shot on an older player, acquire a young rookie who has shown to be a major aspect in this offense. After only playing 16 snaps due to returning from injury, his snap count is bound to increase. -AY

This is a weird week for waiver wire receivers. My #1 waiver-add for all wide receivers would still be Alec Pierce. However, I listened to my own advice and snatched him up where I could. So this week, I’m turning to someone who was drafted in most leagues, and dropped in over half of them. Claypool has turned in two solid weeks in a row. He started getting re-acclimated to the Steeler offense in Week 5, and was the focal point in Week 6. He caught all 7 of his targets for 96 yards and a touchdown in the shocking win over Tampa Bay. There’s never been any doubt as to the talents Claypool brings to the field. He just needs consistency (and a better QB). -RS

The tight end position has been a rollercoaster ride again this year. Sometimes, one of the best waiver wire streaming options is to stay with the hot hand. Tonyan had 10 catches against the Jets in an incredible performance. Tonyan will not repeat this week in and week out. However, it is proven that he is still a safety valve for Aaron Rodgers. His weekly touchdown upside is also there as he approaches a weak Commanders defense. And now with the injury to Randall Cobb, his involvement should be solidified. -AY

The Giants have been the surprise of the NFL season so far. One of the reasons has been the consistency of their rookie tight end, Daniel Bellinger. Rookie tight ends drafted in the first round of the NFL Draft don’t always pan out in their first season. Rookie tight ends taken in the fourth round sometimes don’t see the field at all. Yet Coach Brian Daboll has shown tremendous faith in the first-year player out of San Diego State. He has given fantasy owners double digit games each of the last two weeks, and has three touchdowns already on the year. He’s not going to provide a ton of upside, but his involvement in the offense won’t allow him to give you a goose. -RS

The Bengals are a great addition during this waiver period. Their next three games are against the Falcons, Browns, Panthers, and Steelers. These matchups are all anemic offenses who have struggled at the quarterback position. When deciding a defense, it is best to bet against the opposing offense. This defense could potentially cover the position for the next four weeks. -AY 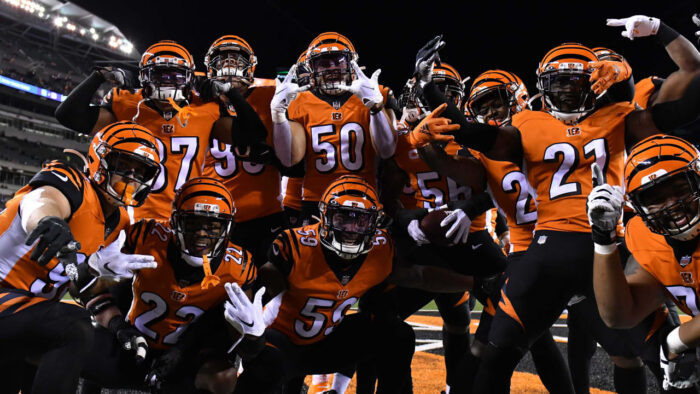 The Bengals defense celebrates a turnover. Photo courtesy of bengals.com

The Pittsburgh Steelers have allowed a Top 12 defensive performance in four out of six games so far on the season. They are in the top half of the league in sacks allowed, and top 8 in giveaways and fewest points scored. There’s just a solid baseline for a defense against them, with a huge upside. -RS