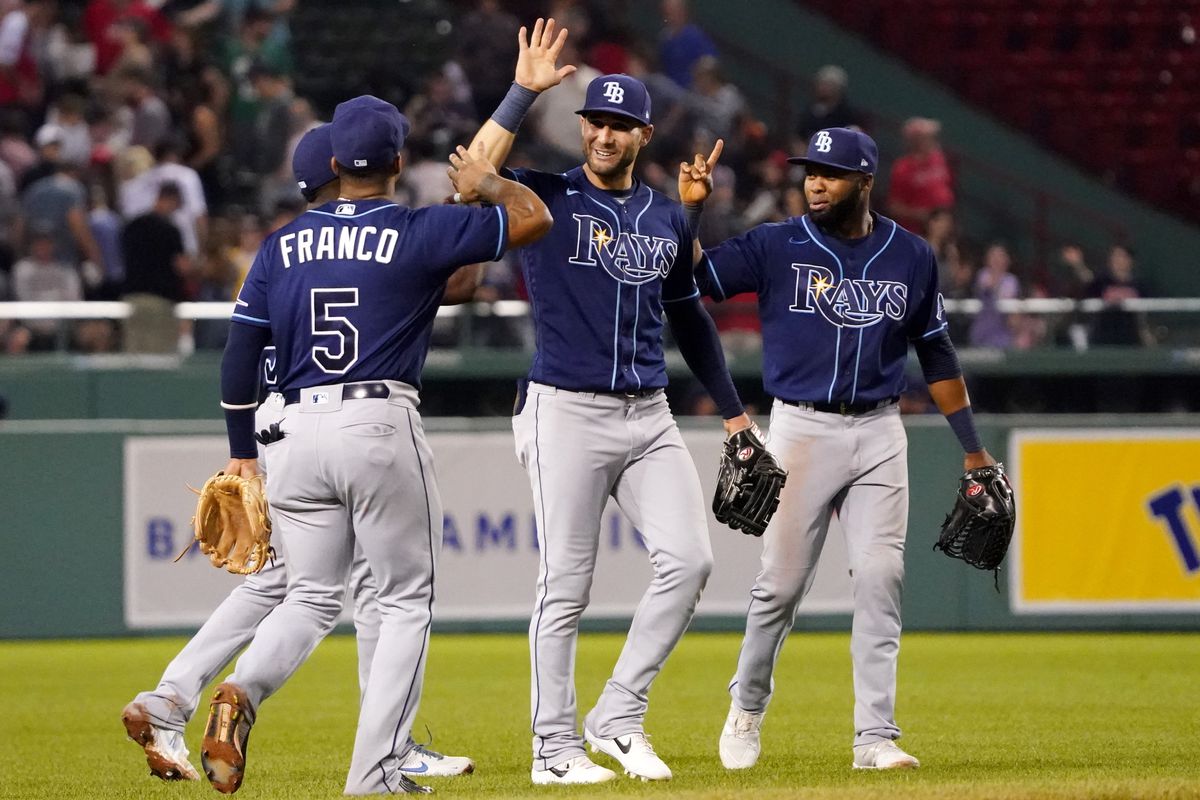 With the AL East all wrapped up, the focus now is wholly on the Wild Card race, where three divisional teams are still in the mix.

The Rays have taken the AL East since last week, but also importantly, the Yankees jumped ahead of the Wild Card with a sweep of the Red Sox.

You should have seen the lead by now–the Rays won the AL East for the second straight season.  Kevin Cash can use the last week of the regular season to rest his few regulars and decide on lineups and a pitching plan for the playoffs.  They will get a tough ALDS matchup, facing whichever division rival wins the Wild Card game.  One other nugget to come out of the weekend is that the franchise is moving forward with their plan to someday split time between Tampa Bay and Montreal.

One thing to look out for is which rookies help down the stretch.  AAA-Durham has the best record at their level due to an abundance of talent, and we could see some make an impact.  Wander Franco is currently two games away form the rookie on base record, but he faces some tough Houston pitching.  Shane Baz looks really good so far, and power/speed threat Josh Lowe might get another shot.

The Yankees did exactly what they needed to do: sweep the Red Sox.  Giancarlo Stanton carried the team on his back with two game-winning home runs over the Green Monster, one a grand slam.  His clutch hitting earned him AL Player of the Week.  The Bronx Bombers are now in the enviable first Wild Card spot, but they are in no way safe.  They have the toughest schedule remaining, with three in Toronto and then three against the AL East winners.

The pitching looks much better lately, giving up three runs or less in every game since the blowouts against Cleveland.  The six-game winning streak will be tested against the best lineup in the league.  Gerrit Cole has one last chance to make his Cy Young case, and a dominant performance to get them in the playoffs might earned him his first.

Getting swept at home by the Evil Empire in the midst of a playoff race is flat out inexcusable.  The Red Sox had the perfect opportunity to knock out the Yankees, but now they are in danger of missing the Wild Card game.  The Sox still have one advantage left, as their last six games come against the lowly Orioles and Washington Nationals.  Going 4-2 against those teams might seem disappointing, but it should be enough to get them in.

I hope Alex Cora called a team meeting, because everyone has to step up.  Bullpen collapses, most notably from Adam Ottavino, sunk them over the weekend, but they are not all to blame.  Nathan Eovaldi had his worst of the season, giving up seven runs in less then three innings.  He can redeem himself this week, along with Xander Bogaerts, who only has a few big moments since coming back from the COVID-IL.

The most exciting team in baseball has their playoff opportunity right in front of them.  Hosting the Yankees and then the Orioles, the Blue Jays have a clear path towards grabbing a spot. What I said about Cole also applies to Robbie Ray, as one last clutch start could earn him his first Cy Young award.

Marcus Semien‘s amazing comeback season reached a historic milestone Saturday, as he tied the second baseman record with 43 home runs.  With other longstanding records falling, this one is equally impressive as Davey Johnson had been on top since 1973.  Vlad Guerrero Jr.‘s breakout has been wonderful to witness, but Semien’s season is satisfying in how he proved every other team wrong.

Despite a weekend of “meaningless” games against the Texas Rangers, there was quite a bit of news in Baltimore.  First and foremost, manager Brandon Hyde will return this season to oversee another year of the rebuild.  He has an unsightly record in his three seasons managing the Orioles, but it is hard to blame him for leading a roster seriously lacking in talent.  Breakout superstar Cedric Mullins made history on Friday, becoming the first Oriole with a 30/30 season.  For a team with a long and cherished history, it is quite remarkable for him to be the first in Baltimore.

On the minor league side, the AA Bowie Baysox were quickly swept by Akron in the championship series.  On a more positive note, the O’s named their top minor leaguers, and there were no surprises.  Adley Rutschman and Kyle Stowers are both the Brooks Robinson Minor League Players of the Year, and Grayson Rodriguez is the Jim Palmer Minor League Pitcher of the Year.  Rutschman is the top prospect in all of the minors, and Rodriguez is the top pitcher, but Stowers took a big step up this year.  A second-rounder out of Stanford in 2019, Stowers played in three levels this year with 27 total home runs and a combined OPS of .914.

MVP Races Are So Close, Baseball Might Have the Best Runner-Up Ever
Green and Gold Report: Another Rough Week Officially Erases A’s Postseason Hopes