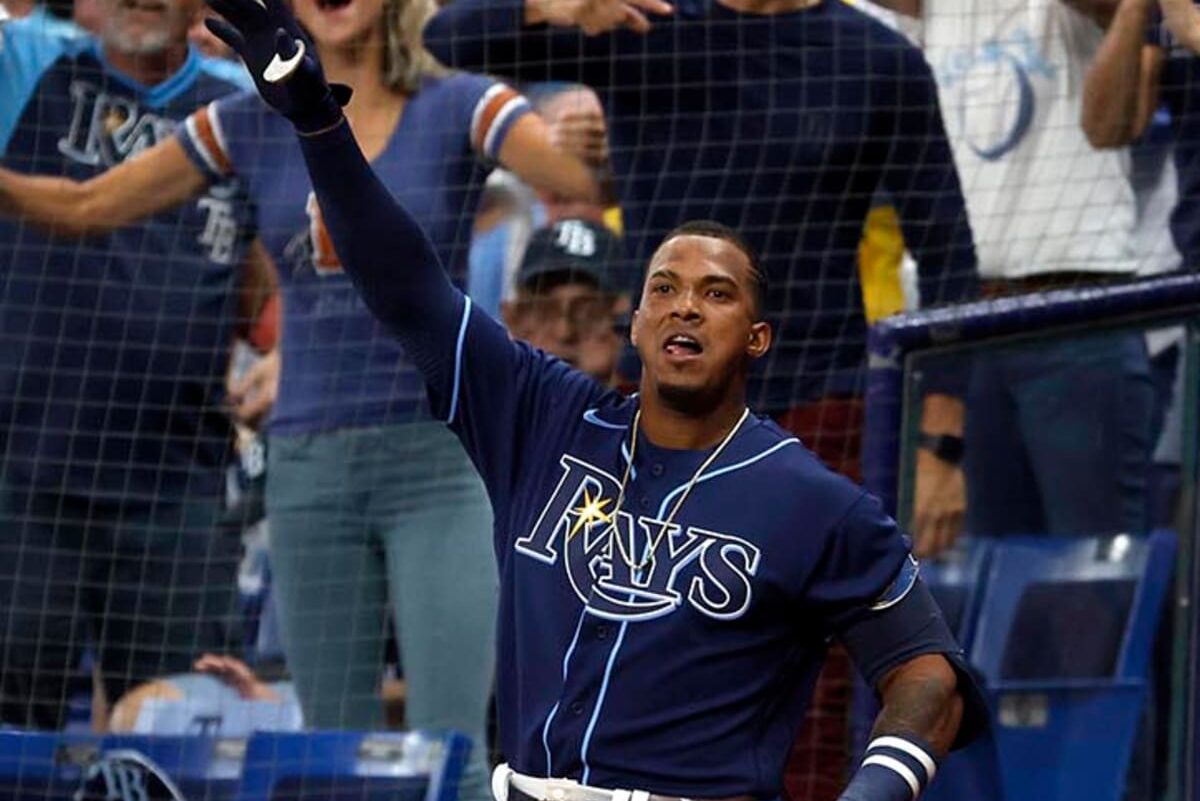 Tampa Bay sweeps the Red Sox to take the AL East lead, while the four contenders are make meaningful trades to various degrees.

The whole baseball landscape has changed since last week, and that is especially true in the AL East.  Trades abound as the deadline passed and the stretch run gets underway.

A 4-3 week boosted the Rays to first place in the AL East after sweeping the Red Sox.  They lost a series to the Yankees before that, but they won the finale 14-0 behind a lot of long balls.  After a great trade for Nelson Cruz, Tampa had a confusing deadline where they traded away Diego Castillo for seemingly no reason.  They are back to closer by committee.

Austin Meadows led the barrage with two home runs, and Randy Arozarena and Ji-Man Choi also hit two for the week.  Francisco Mejia is pushing for more playing time with a 3-7 week while Mike Zunino went just 1-12.  Wander Franco is now playing like his potential with a .389 week, including two triples.

The rookie pitchers are performing better than the veterans at the moment.  Tyler Glasnow will get Tommy John surgery, but the team still has a division to win.  Shane McClanahan and Luis Patino both threw quality starts.  The rest have been okay, but the bullpen is mostly shutting down opponents as usual.  New acquisition J.T. Chargois pitched a scoreless inning in his debut.

The Red Sox had a rough week, going 1-5.  Getting swept by their main competition is any easy way to give up the division lead, but they will regroup.  Kyle Schwarber and Hansel Robles are small additions, who will help, but I am not sure how much.  Schwarber is still hurt, and he has not played first base since the Cape Cod League in 2013.  Chris Sale will be back soon, but another fifth starter would have been good insurance.  Some news that flew under the radar is that they did not sign Jud Fabian, their second-round pick this year.

Xander Bogaerts is bad from injury and ended his slump his a home run.  In a poor week for the team, Rafael Devers was the only player with an OPS over 1.000.  J.D. Martinez is going through a brutal stretch with just two hits the whole week.  That combined with the role players struggling, and the offense hardly scored.  Perhaps Monday’s off day will help before heading to Detroit.

Just to make things worse, the rotation also has an awful week.  Tanner Houck gave up one run in four innings, and that was the best start the team got.  He was also sent back down to AAA afterwards.  After a great first couple of months, Red Sox pitching has really struggled in the summer heat.  They need to pick it up to win the AL East.  Garrett Whitlock continues to be a revelation with four scoreless innings and the only win of the week.  He has 2.1 WAR and a 1.21 ERA in long relief.  That is incredible for a Rule 5 pick.

A feel-good 5-2 week ended with some bad feelings.  After making the huge trades of Anthony Rizzo and Joey Gallo, the Yankees swept the Marlins but got blown out in their home debuts.  Andrew Heaney became the first Yankee to give up four home runs in his team debut.  Maybe getting a flyball pitcher in a homer-happy park is a bad idea?  To make things worse, Gerrit Cole tested positive for COVID-19 Monday.

Rizzo has been great so far, though, with two home runs in four games.  Even with a good weekly record, the offense is not hitting.  No one else homered, and Aaron Judge and Rougned Odor were the only others with multiple RBI’s.  A one-man offense has been the problem all year.  Now, it is just a different man doing the heavy lifting.  Rizzo is the only one with an OPS over .700 for the week.

The last time Cole pitched, he got torched for eight runs, seven earned in a blowout loss.  Albert Abreu was even worse in relief, giving up seven in just two innings.  He might be out of a job soon.  The rest of the week went well, though.  Jameson Taillon won Pitcher of the Month, and he threw 5.2 scoreless in his last start.  Nestor Cortes rewarded his manager with five good innings, and Jordan Montgomery did the same.  Trade pickup Clay Holmes pitched a scoreless week in relief, but Joely Rodriguez did not.  The jury is still out after five days.

An extra inning loss on Monday does not ruin a celebratory 5-2 week.  After close to two years, the Blue Jays finally returned to home to Canada over the weekend.  George Springer made it a warm welcome with six hits on his way to winning Player of the Week.  They made the biggest splash on Friday by trading for Jose Berrios, and he pitched six scoreless innings in his team debut.  The Jays are still out of playoff position, but things are trending up.

The pitching is really why Toronto played well this week.  With the addition of Berrios and Alek Manoah returning, the Jays suddenly have four good starters.  The two of them, Robbie Ray, and Hyun Jin Ryu all threw quality starts this week.  Ray was a reclamation project, and his season ERA is 3.04.  Ross Stripling held his own, but the fifth starter role might rotate going forward.  Joakim Soria pitched a scoreless inning in his team debut, but Brad Hand gave up three runs for the Monday loss.

The Orioles continued a good second half with a 4-3 week.  They capped it off with a blowout win over the Yankees, hitting four home runs.  The satisfying win comes after a split in Detroit and an unusually quiet deadline.  With very few expiring contracts, GM Mike Elias only dealt away Freddy Galvis and Shawn Armstrong.

Four players had multi-homer weeks, which is unusual for this squad.  Pedro Severino hit three, while core players Cedric Mullins, Ryan Mountcastle, and Austin Hays each hit two.  Ramon Urias also homered and will start at shortstop for the foreseeable future.  His season OPS is up to .763.  The guys who need to be hitting have been picking it up lately.

The same thing is true of the rotation.  John Means got his first win since his no-hitter in May, a very welcome sign.  Matt Harvey, still with an ERA over 6, has now thrown three straight games of at least six scoreless innings.  Jorge Lopez took a no-hitter into the sixth Monday night, and he has not gotten to that inning since June.  Unfortunately Spenser Watkins fell back to Earth, but not everything can go right.

The American League East is Heating Up as Tampa Pushes by Boston
Green and Gold Report: A’s See Impact From Trade Deadline Acquisitions as They Fall into the Thick of the Playoff Chase