What Week 18 Means For The NFC East 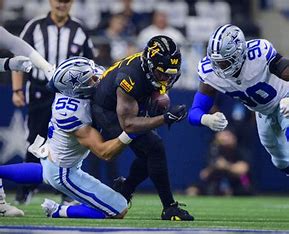 And just like that, Week 18 of the NFL season is upon us.

The 2022-23 season has flown by and a lot is riding on the last week of the regular season over the whole league.

With the NFC East specifically, three out of four teams have clinched a playoff berth. The Washington Commanders were the lone team that could not clinch after having opportunities to in the past two weeks. The Philadelphia Eagles, Dallas Cowboys, and New York Giants will all have a shot at the Super Bowl.

Here is what each team is playing for in week 18:

The Eagles will control their own destiny along with many other teams in the NFC this Sunday against the Giants. After sitting at 13-1 through 14 games it looked like the Eagles had the number one seed all but locked up. But after losing consecutive games to the Cowboys and Saints, the number seed and first-round bye are in jeopardy.

If Philadelphia wins this week they will secure the first seed and a much-needed bye with their roster pretty banged up. But if the Giants do somehow come out on top, they could drop to the fifth seed and not even host a home playoff game.

With a must-win this week, it looks like QB Jalen Hurts is on track to play to secure the first seed. The Eagles have looked spectacular all season but looked beatable in their past two games. It’s not only important for the Eagles to win this week but also to regroup and gain some momentum/confidence going into the playoffs.

As of now, it looks like the Giants will be resting a lot of their key starters, as their seeding is already locked up. So the Eagles should be looking at a first-round bye and then will face the lowest seed in the division round of the playoffs.

But the most likely scenario is Dallas landed the fifth seed which will mean they will face Tom Brady and the Buccaneers in the wild-card round. In the season opener, the Cowboys could not get anything going on offense and lost 19-3. Each team is in a very different position than they were in week one but it is something to note. Tom Brady is also 7-0 against the Cowboys in his career.

The Cowboys will look to come out of week 18 with a win regardless of what another team’s outcome is. Momentum is important and it will be much needed as they’ll play the Buccaneers in the first round.

The Giants have made the playoffs for the first time since 2016 this season. First-year head coach Brian Daboll has made huge progress in the building this season. At the beginning of the season, no one thought the Giants would have already clinched a playoff spot with week 18 still to be played.

The Giants will remain the sixth seed regardless of their outcome against the Eagles this week. As stated, the Giants will be resting starters before their wild-card matchup. Their most likely opponent as of now is the Minnesota Vikings.

The Washington Commanders have missed the playoffs for the second consecutive season. They will not be playing for anything in week 18 as they have announced rookie QB Sam Howell will have his first NFL start against the Cowboys.

Through 12 weeks of the season, it looked as if the whole NFC East was going to make the playoffs. But after a tie against the Giants in week 13 then three consecutive losses, the Commanders were knocked out of playoff contention. A very disappointing end to a hopeful season for the Commanders and their fans. They’ll look to end on a positive note in week 18.

The Jaguars Could Be Scary In The Playoffs
Untapped Potential: Al Toon