Where Do the 76ers Go From Here? Part 1: Ben Simmons 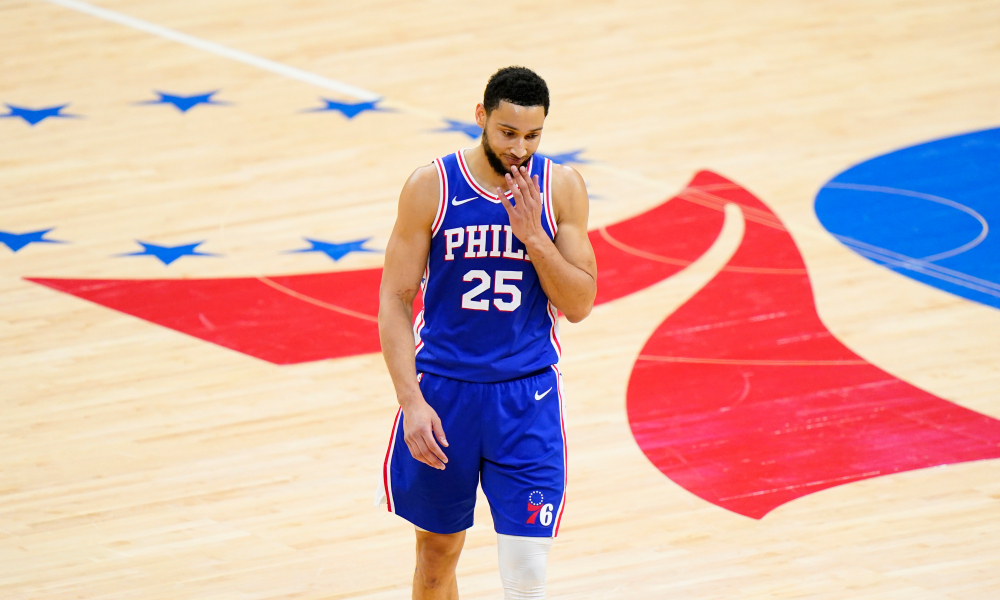 A more heart-breaking, rage-inducing and disbelief-causing a series there never was. The Philadelphia 76ers’ 2021 season is over thanks to a 103-96 Game Seven loss to the Atlanta Hawks. On the way, they blew multiple massive leads and lost three games at home. So much of the regular season was about getting the one seed to get home court advantage and avoid playing both the Milwaukee Bucks and the Brooklyn Nets. Turns out, they won’t play either. The 76ers had every opportunity to make a deep run, and even win the NBA Championship. The looming specter of LeBron James wasn’t around, and one of the craziest super teams ever in the Brooklyn Nets were also bounced early due to injury. Combined with the aforementioned one seed and the advantages that brings, expectations were understandably sky high. This could easily be the best chance the 76ers were ever going to have with Joel Embiid. With such unmet expectations, major changes are expected, and major changes will happen. What will the changes be? How drastic will they be? Let’s take a look at a few prime candidates for change, starting with Ben Simmons.

What Happened to Ben Simmons?

Ah, Ben Simmons. This might be the most an All-Star player’s value has tanked in one postseason ever. To say he was exposed would be an understatement. Simmons’ offensive game was an absolute joke, a ridiculous liability. There’s no one reason any team loses four games in a series, but one consistent factor through the entire series was Simmons’ failure to contribute meaningfully on the offensive end. Simmons is on a max contract and scored under 10 points four times. He averaged just 9.9 points per game. His free throw shooting was historically bad, shooting 33% from the line. That was the final nail in the coffin to any offensive contribution he might have, as he got scared, timid and was unplayable in crunch time.

It’s clear that Simmons is broken mentally. He’s terrified to try to score or even touch the ball, as evidenced by one of the most spineless plays in NBA history. With three minutes left to go in the 4th quarter and the Sixers down just two points, Ben Simmons, a 6’10” uber-athlete, found himself alone right next to the hoop. Instead of dunking with the ease of an adult on a little tikes toy hoop, Simmons inexplicably decided to pass to a double-teamed Matisse Thybulle, who failed to score and converted only one of the subsequent free throws. He passed this ball. It was a shameful, cowardly act, one that deflated the whole team and stadium. At that point, the Hawks knew they were in control, and the 76ers could feel the creeping cold of doubt seep in. Joel Embiid said as much, basically throwing Simmons under the bus by saying “I’ll be honest, I thought the turning point was when we—I don’t know how to say it—but I thought the turning point was just we had an open shot and we made one free throw.”

Not only has Ben Simmons not improved offensively in his four years playing in the NBA, which would be problematic in it’s own right, he’s actually gotten worse. In his rookie year, he averaged 16.3 points in the playoffs with 70% free throw shooting. If the 76ers had just gotten rookie year Simmons, this series would have been over long before Game Seven. Instead, they got the broken mess of fourth-year Ben Simmons.

What to Do With Simmons?

Just like another Philly sports hero-turned-villain in Carson Wentz (or even Andy Reid before him) it’s clear that Simmons’ time in Philly is up. Embiid all but publicly blamed him for the loss, the city won’t forgive his absolutely dreadful performance, and his max contract looks like as much of a millstone around the necks of the 76ers as Al Horford’s once did. When asked if Ben Simmons can be the point guard of a championship team, Doc Rivers, who was Simmons’ biggest defender this year said “I can’t answer that right now.”

Simmons can turn it around, but not here. He’s still got ridiculous talent, size and athleticism, but it’s become clear that he won’t develop what he needs to develop as long as he is in Philadelphia. Maybe another team can unlock him, but the 76ers will not be that team.

Now the question is, where and for what. 2021 was the first year of a five year 177 million dollar contract. That is not going to be easy to deal, especially combined with Simmons’ horrible performance in the playoffs. Who will want a guy that proved to be an absolute offensive black hole when it matters most? The 76ers might have to give up picks to a tanking team, or trade for an aging veteran, or both. Simmons is just 24 (turning 25 soon) and has bundles of natural talent and is still one of the best defenders in the NBA, so it’s not like his value is zero, but his value is at an all-time low right now.

Where Can They Deal Him?

Some players they may be able to get without sacrificing a pick are people like Kemba Walker, John Wall, and possibly Kyle Lowry if a sign-and-trade is necessary. All of those guys are on the wrong side of thirty (with similarly hefty contracts), with Lowry being the ripe old age of 35 and the other two having rather extensive injury histories. They all can handle the ball well though, and importantly they can all create their own shot. The Oklahoma City Thunder and the Houston Rockets are trying to rebuild, and a young All-Star like Simmons fits their timeline while the players mentioned clearly don’t. Simmons also fits decently with the Raptors. They are trying a quick turnaround, and Simmons can contribute right away. He can also cover for guys like Fred Van Vleet who is shaky defensively, and the Raptors also have a plethora of talented scorers like Van Vleet and Pascal Siakam to cover for Simmons in turn.

Mike Conley is of a similar age as the aforementioned guys and also has a pretty large contract. Whether the Utah Jazz would want to do it is the question. Conley had a career year in Utah this season, but was unable to show up when needed due to injury, and that might only get worse as he ages. Simmons provides perimeter defense which the Jazz desperately need, he can help fill Conley’s playmaking duties and the Jazz have a ton of great shooters that can cover for Ben as well.

For non-point guards, names like C.J. McCollum and DeMar DeRozan have been floated out. McCollum also had a disappointing playoff run, and C.J’s offense can help the 76ers while Simmons defense helps the Portland Trailblazers. DeRrozan has been a capable playmaker (along with his usual efficient scoring) since moving to the San Antonio Spurs, but his lack of three-point shooting makes it a less clear fit. DeRozan is also an upcoming free agent, so it’s a little different.

These are all guys that have at least somewhat matching salaries, and all have their own issues that should save the 76ers a pick. If the 76ers are forced to package draft capital, options open up more as well. What the 76ers are looking for is also interesting. Do they want a ball-handler to replace Simmons outright, or do they decide Tyrese Maxey is ready and go for something completely different, like more shooting? Someone like Buddy Hield comes to mind there.

In Morey We Trust

Most of Daryl Morey’s moves this season have been excellent, the sole exception being whether he did enough at the trade deadline. He only acquired George Hill who was less impactful than many had hoped. Regardless, Morey has earned the benefit of the doubt for now, and his next mission will undoubtedly be trading Ben Simmons. For what, and for whom, is the key to the 76ers future.