Where Will Jimmy Garroppolo Land in 2022? 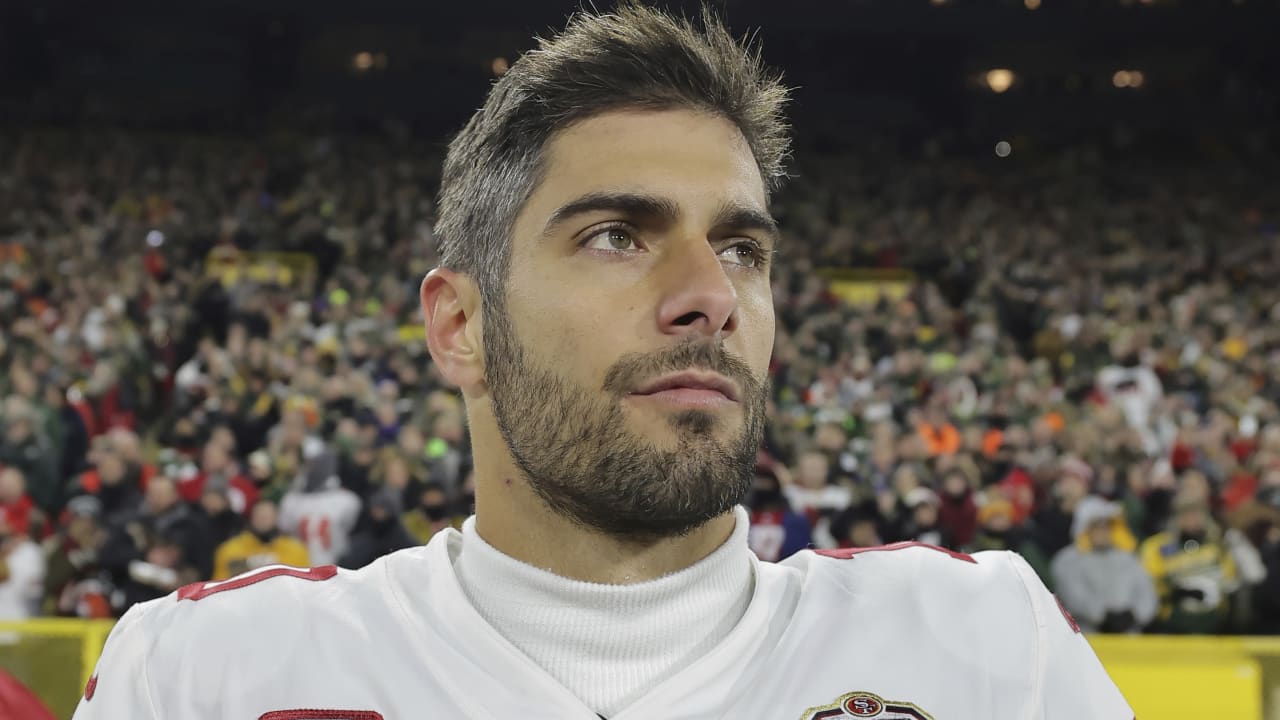 Just over a month away from training camp and the question remains. Where will Jimmy G be playing in 2022? With Trey Lance in line to finally take the rains as the 49ers starter after being picked No. 3 overall in last year’s draft. Garrappolo’s future has largely been in flux this entire offseason. Especially after having shoulder surgery in March and an offseason where the likes of Russell Wilson, Matt Ryan, and many others all found new homes. Garappolo and the 49ers find themselves in a tricky situation.

This has been the team everyone has mentioned as a good fit for Garoppolo for months and there’s a reason why. Carolina’s quarterback room is sort of a mess. They enter the season with a room including Sam Darnold and Matt Corral. Darnold is said to be their starter for now but after a season where he threw more interceptions than touchdowns in 11 starts after being traded for three draft picks. It’s hard to believe he is a viable option. Then there is the rookie third round pick, Matt Corral. Who is pretty unlikely to be a day one starter. Even though I like Corral’s potential. It’s hard to tell whether that will ever come to fruition. A need is clearly there for the Panthers and with Matt Rhule seeming to be under the hot seat. An experienced quarterback like Garoppolo could at least provide some life and wins to this team. Along with some intriguing pieces on offense such as, star running back Christian McCaffrey and his fellow running mate Chuba Hubbard. A solid wideout core of DJ Moore, Robby Anderson, and Terrance Marshall. Paired lead by Shaq Thompson. We’ve seen Garappolo thrive in a similar situation in San Francisco. Making this an ideal fit for both sides.

While Garappolo’s time with the Niners hasn’t always been the prettiest. The one thing you can’t deny is they win when he’s on the field. From being one throw away from a super bowl victory in 2019 and a NFC championship appearance last season. There is something to be said about a quarterback who is 31-15 as a starter. The team’s creative run-first offensive scheme lead by Kyle Shanahan, has shown to be one where Jimmy can play his best ball. In the two full seasons he has played (2019, 2021) he has never posted a QB rating less than 98. Even with the injury concerns and the fact they haven’t been able to get over the hump with him under center. He provides a stability at the position that at least gives them the confidence they can win on any given Sunday. Along with all of that, this probably is still the most talented team Jimmy can play for. With how inexperienced and unproven Lance is. It’s impossible to see what the future holds, and if the gamble by John Lynch and Shanahan will even pay off. The Niners will likely have to eat some of Jimmy’s contract as well, even if they do trade him. So what’s the harm in probably having the best backup in football for one more year? A new chapter can be nice but sometimes staying home is the best decision you can make.

There’s no way Seattle starts the season with Geno Smith or Drew Lock as their quarterbacks can they? According to Pete Carrol they will be. Carrol said recently when talking to Seattle reporter Maliik Obee, “Man they’ve been impressive, they’ve been really impressive.” So why put them at No. 3 on this list? Well when it comes purely to the football fit. It might the best one on this list for Jimmy G. With a head coach who has always prioritized running the ball and playing hard nose defense. Along with a backfield that now includes Rashad Penny, second round pick Kenneth Walker, and a possibly healthy Chris Carson. Not to mention a receiving core that is lead by Tyler Lockett and DK Metcalf. This team is just as good a fit as any. Carroll will be 71 in September and it doesn’t seem like he is in for a rebuild anytime soon. In their current situation Garappolo would give this team their best chance to win and supply a leader in the locker room who can really bring this offense back to life. All that being said, they come in at third on this list for a few reasons. One, playing in the same division as San Francisco makes it unlikely the Niners would be willing to trade him there. Secondly, Metcalf may not hit the field with his on-going contract situation or even be a Seahawk for that much longer. Lastly, It all comes back to Carrol’s handling of the QB room so far. He clearly seems content with the guys he has and doesn’t seem to be budging anytime soon. Now if for some reason any of that were to change. I could see Jimmy wearing the blue and silver this season.

After controversially acquiring Deshaun Watson in March and paying him a fully guaranteed 230 million dollar contract. The Browns have put themselves in a tight spot. With Watson’s NFL investigation looming and a decision said to be coming before the start of training camp. There is the possibility he can be suspended anywhere between six games, a year, or even more. With that being said, Cleveland still has to be a product out on the field. Jacoby Brissett was signed this offseason in hopes to start in place Watson for the time being, and while Brissett is a competent NFL quarterback. His former teammate Garappolo, has shown to have more of a winning impact. Head Coach Kevin Stefanski has shown to be able to work his offenses around the talent on the field. As well as produce a rushing attack that his been tops in the league the past few seasons, with duo Nick Chubb and Kareem Hunt. There is a possible fit here for Jimmy and the Browns. In addition, with 42 million in cap space in 2022. They are one of the few teams who could afford bringing in that large contract.

Zach Wilson may very well finally be the franchise quarterback the Jets have been looking for, but we are talking about the Jets. Where things can go south very quickly. This is of course a long shot but in the NFL anything can happen. With coaches Robert Saleh and Mike Lafleur both coming over from San Francisco. There is a connection here and one that could maybe come into play if Garappolo ever came into the picture. We’ve seen this staff take in former Niners just as recently as the signing of guard Laken Tomlinson this past offseason. So whose to say it wouldn’t be an interesting fit if Wilson struggles again or even regresses in 2022? With a promising team being built around him and an offense somewhat similar to San Francisco’s, this could be a promising mid-season or 2023 landing spot for Garappolo. Wilson has an amazing chance to flourish this season and become the quarterback many thought he was when taken No. 2 in last year’s draft. If not, don’t be surprised when the phone starts to ring in San Fran.