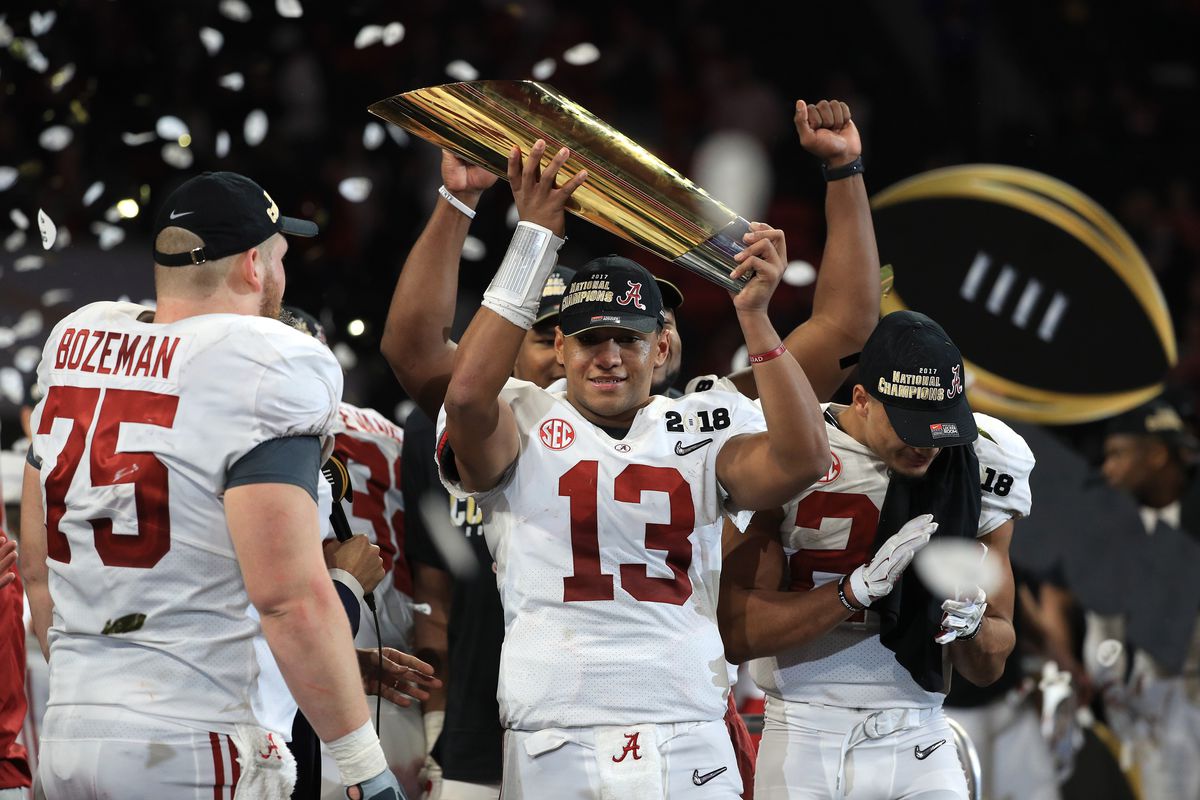 Okay, before we get started, let’s be clear about one thing: any college football team would get crushed by any NFL team, even the 2017 Browns. Now that that’s out of the way, let’s move on to Alabama’s 2017 recruiting class. According to 247Sports, the Crimson Tide’s 2017 recruiting class was the best in the SEC, and in the nation. However, when you look deeper you start to realize that the Tide’s 2017 class was one of the best of all-time, if not the best.

Jerry Jeudy was the 3rd best receiver in the country and fifth best player in Florida. Jeudy won the Biletnikoff Award, as the nation’s best receiver, during his sophomore year at Alabama in 2018. He was selected by the Broncos with the 15th pick in the 2020 NFL Draft. Jeudy mad quite an impact on the Denver offense, catching 52 passes for 856 yards and three touchdowns.

Sitting right behind Jeudy in the 2017 rankings was Tua Tagovailoa, the 32nd ranked player in the country, and the best quarterback in the country coming out of high school. Tagovailoa had a great career at Alabama, which began when he threw the game winning touchdown pass to Devonta Smith in the 2018 National Championship. Tagovailoa is also in the NFL, after he was drafted fifth overall in the 2020 draft to the Miami Dolphins.

Jedrick Wills, Xavier McKinney, and Henry Ruggs III were all part of the 2017 recruiting class, and were drafted last year in the 2020 NFL Draft. Wills and Ruggs III were both selected in the first round to the Browns and Raiders. McKinney was viewed as a first round pick by most experts, but he was drafted with the fourth pick in the draft to the New York Giants. Wills Jr. had a great rookie season for the Browns. He started in all but one game, and was one of the highest graded rookie pass blockers. Ruggs III also had a solid rookie season for the Raiders. He caught 26 passes for 452 yards and two touchdowns, while playing in 13 games. Ruggs III is also a true speedster, and will get better with more experience. Mckinney didn’t really see the field until week 12. However, he did have 25 tackles in the six games he played in.

Now that we’ve got through the NFL players from the 2017 recruiting class, it’s time to look at the players from that 2017 recruiting class that helped Alabama win the national championship this year. Najee Harris, Dylan Moses, and Alex Leatherwood were all top 15 prospects coming out of high school. Harris was the number two prospect in the country in 2017, and this year he had a break out season. Harris carried the ball 251 times this year for 1,466 yards and 26 touchdowns. He also tacked on four receiving touchdowns and the Doak Walker Award this season. Leatherwood, one of Alabama’s offensive tackles, won the Outland Trophy this year, which goes to the nation’s best offensive lineman. On top of that, a lot of mock drafts, including this one from USA Today, Leatherwood is projected to be a first round pick. Finally, Moses was the nation’s 13th best prospect coming out of high school. He started every game for the Tide as a sophomore and as a senior. He suffered a season-ending injury during his junior year. Moses had 80 total tackles this season to go along with 1.5 sacks and one interception. He was also a first-team all-SEC player along with a third-team all-American selection.

Finally, people forget that Devonta Smith, the 2020 Heisman winner, started his career catching the game winning touchdown pass from Tua Tagovailoa in the 2018 National Championship against Georgia. Coming out of high school, Smith was the 62nd best prospect in the nation. Not only did Smith win the Heisman this year, he had 117 catches for 1,856 yards and 23 touchdowns. Smith also won the Biletnikoff Award, given to college football’s best wide receiver. Who benefited the most from Smith’s incredible season? Obviously his quarterback, Mac Jones. Jones was also a member of the 2017 recruiting class, but had nowhere near the hype the other players from that class got. Mac Jones was a three-star prospect coming out of high school, and was ranked as the nation’s 399th best player. Jones threw for exactly 4,500 yards this year with 41 touchdowns to only four interceptions. Jones had a lot of help from Smith this season. Smith accounted for 41% of Jones’ passing yards and 56% of his touchdowns.

All in all, the 2017 Alabama recruiting class was probably the best in the history of college football. They rival the 2001 Miami Hurricanes for the most NFL talent on one college football roster. With that, there is one question that remains. Which team was better, 2019 LSU or 2020 Alabama? Last year LSU and Joe Burrow put on a clinic offensively with stars like Justin Jefferson, Ja’Marr Chase, and Clyde Edwards-Helaire. Many experts and fans alike thought last year’s LSU team was the best team in the history of college football. Little did they know, that claim would be challenged the next year. Both teams were incredible, and had Heisman winners on their roster, but we’ll leave it up to the reader to vote for who was better. I will give my opinion after the voting closes on Sunday night. So we end with this, who was better, 2019 LSU or 2020 Alabama?

Is Robert Salah going to be the next Head Coach for Gang Green?
The Man to Man Podcast Episode 1: Alabama Steamrolls Ohio State, The Browns Won A Playoff Game, and Where is Kyrie?